VENTURA—More than 300 individuals showed up in about 150 cars to Friday’s noon “Freedom Drive” at the Ventura County Government Center asking, pleading and even demanding that Ventura County Re-Open for business, social, education and religious life. 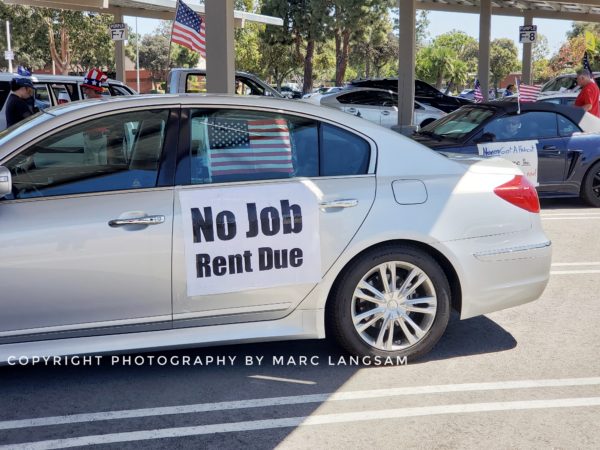 The cars which at one point stretched nearly half-a-mile on Victoria Avenue, then onto Telephone Road, Thille St,. and south past Ralston, had American flags waving from windows as well as banners and signs sharing their message to observers before scattering in different routes around the Government Center. The Freedom Drive cars received honks from other drivers and thumbs up and a few demonstrators stood at the intersection of Victoria Avenue and Telephone Road.

The Freedom Drive was crowd-sourced Sunday and Monday by 30 Ventura County Citizens participating in an email thread originally sent out by Citizens Journal Editor Debra Tash and then organized by a few people, including Thousand Oaks Tea Party activist Carolyn Guillot. 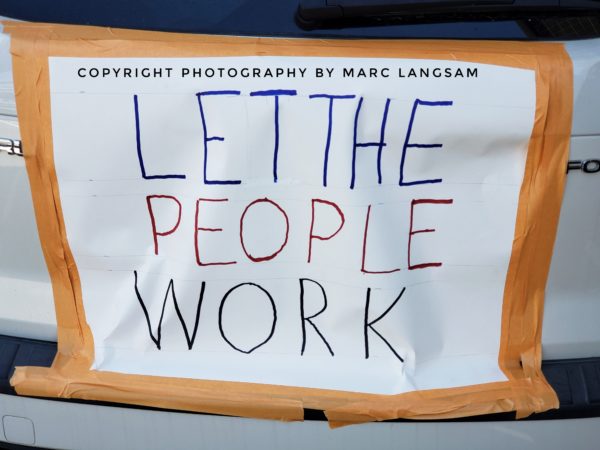 Deborah Baber, an operations specialist, stepped up to plan the logistics. She did the routing and utilized a telephone conference line to communicate with Freedom drivers said over the phone line:  “Give us hope, Give us a plan, give us a light at the end of the tunnel.  When can we see it?”  The participants took care of the rest, showing up with appropriately festooned cars, message and spreading the word to friends, family and officials. No County Supervisors, CEO or other officials showed up to greet hundreds of their constituents camped right near their doorstep.

After the event during a Citizens Journal interview, Baber said that she had taken event flyers to Fillmore and Piru where she observed businesses shut down and driveways filled with cars. She recounted talking to a woman in her mid-20s that said she was the only one in the household of six adults still working—she was commuting to Los Angeles County—after losing her job in a hair salon.

“How many people behind closed doors who don’t want handouts are crying or are fighting,” said Baber.  We will never see these people represented on a Ventura County chart or graph.  We will never know the cost of their heartbreak and the challenge to get back up again.  How many of the living dead will still be walking among us when this is over?

“I would like to give an ice bucket challenge to our leaders in the County.   You are getting paid thousands and thousands of dollars—all our senior leadership—all our bureaucrats.  Who is going to be the first leader who is going to say since I am working and not you, I will give 50 or 75 percent of my income during this coronavirus pandemic into a trust fund to help those who are struggling.  Where are you with your money?  With your pocket book? 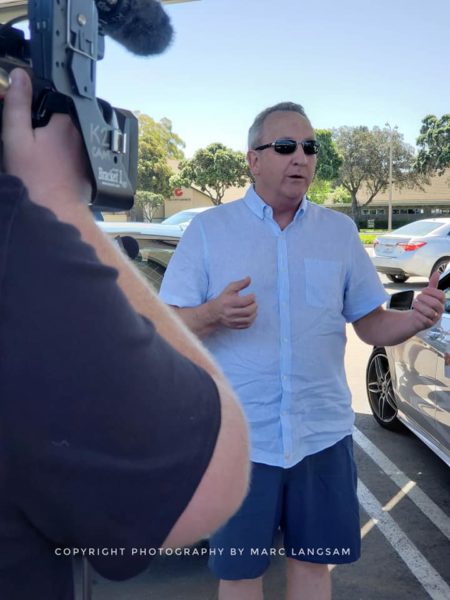 Newbury Park-based Calvary Chapel Godspeak Senior Pastor and former Thousand Oaks Mayor and Councilman Rob McCoy felt strongly enough about the need to continue church services to quit the Council to avoid the conflict inherent in going against a Council order to the contrary. He showed up at the rally event , was interviewed by Fox News and had some pithy quotes for us after the event:

Let’s stop underemphasizing empirical evidence while instead doubling down on hypothetical models. It’s time to open the County and follow the empirical evidence on how to do it wisely. Antibody testing will prove Herd immunity as it has in L.A. (USC Study) and The Bay Area (Stanford Study).

Our County officials need to loosen their stranglehold on our lives by their enforcing of hypothetical models and instead allow us to breathe and live with actions established by empirical evidence.

You don’t stop a nose bleed by putting A tourniquet around the patient’s neck.

The peaceful protest today was done in a hope that the County Officials, Public Health Officials, and Ventura’s Mayor & City Council would heed the people’s desires not to be controlled.
We believe that it is wise to be cautious in this time and not infect those around us out of love for our neighbor. We also believe that those who are not sick and have lost work are suffering and the quarantine orders are a burden.
The Declaration of Independence states, “Governments are instituted among men deriving from their just powers from the consent of the governed.” We want our elected officials to realize that their powers only come from the people and we don’t support their current actions.
The orders labeling what is essential and not are arbitrary.
Stand in line at Vons, but not to receive the Lord’s Supper (Newbury Park)
Fill the Walmart parking lot, but not a church parking lot. I know Community Bible Church attempted a drive in Easter service and VC Sherrif told them no.
Barnes & Noble is approved for curbside sales, Abendego Bookstore in Ventura is shut down.
Wandering the wide open beaches, parks, and hiking trails is somehow unsafe when line cooks can fill a teeny kitchen.
Every official swore to uphold the constitution, yet there is a ban on gun sales in Ventura County.
Not to mention babies are STILL being murdered every week on Ralston at Planned Parenthood.
What would I do differently? Have people opt-in to self quarantine or not. Go out at your own risk. Don’t close parks and restrict private businesses from selling certain items or forcing them shut all together.
That’s tyranny.
Thanks!

The Ventura County Drive for Freedom was a warm-up to next Friday’s May 1 March to Open California rally at the Ventura Government Center, 800 S. Victoria Avenue at 12 noon   that are being staged by a Simi Valley resident Jessica Vander Zwaag and by Gina Bacon a Silver Strand resident as part of a larger organization whose website is www.wehaverights.com. See more: #VenturaMayDayMarchPamphlet. It appears that at least two groups will have events there and that the other one is a drive, similar to last Friday’s. 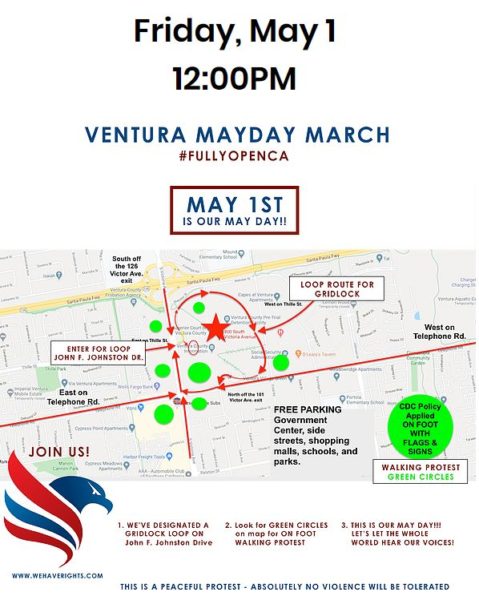 The Ventura rally is one of five rallies being staged on May 1.  The others are: at the Huntington Beach Pier; Los Angeles City Hall; Sacramento Capitol; and San Diego City Hall.  The website states:  “We are demanding that Governor Newsom fully reopen California Now.  We demand our rights are restored.  We have the right to work and we can do so while exercising preventative safety measures.  We cannot survive this shutdown any longer.

“People have been stripped of their rights to freedom of religion.  They have no right to shut us down from our churches.  The right to practice your religion free from government interference is an absolutely essential freedom to every person.  This government overreach violates 1st Amendment rights and we won’t stand for it!

(Editor’s note: we may add more rally participant input to this article as it trickles in, time permitting, so check back later.)

(Editor’s Note:  To see an editorial written by Citizens Journal publisher George Miller on the Covid-19 lockdown go to this link: https://www.citizensjournal.us/politicians-and-health-care-bureaucrats-you-have-no-idea-what-youve-done/

Thank you for this newspaper! I just discovered it. In order to get more truth to the people, you must dive deeper into this plandemic and find the connections between Bill Gates and Dr. Fauci and all the other players in this agenda, and look at their past record. Do you think of Ethiopia as a healthful nation? Then why is the Health Minister from Ethiopia the head of the WHO?You will be astonished. People would rather play along with the lie than admit they have been fooled. Take off your masks and go open your businesses. Hug your neighbors. Every one of these supposed Covid-19 deaths, especially in Ventura County, are false. They all died of something else. The 37 year old died from a drug overdose. It says so right in the Star’s article. Find the truth. You will get nowhere protesting. Just open your businesses, and support everyone in doing so. DO IT!

These protests are beginning nationwide. They won’t be peaceful for much longer.

Thank you for fighting back against hit and run media. KEYT retracted their false attendance numbers but their photo of a handful of protesters with flags on Victoria is still misleading. The majority of protesters were driving their flag and sign “festooned” cars and trucks.

I understand that vulnerable groups should be protected. But there are many healthy and fit people out there who are being forced to close their businesses and are on the verge of losing their life’s savings. We should be treated like the responsible adults we are. Those who have underlying medical issues should stay home and protect themselves, and those who don’t should be allowed to provide a living for their families as well as precious jobs for others. It is time to let people choose what’s best for themselves. Going broke is not the preferred choice for most people. The car protests are a good (and safe) way to let our politicians know that people need their freedom back.

Video made by Marc Langsam, the “Photography Czar”

DO NOT CONSENT TO THE MARK OF THE BEAST (FORCED VACCINATIONS) AND THE COMING 5G GENOCIDE. LOOK FOR DAVID ICKE’S BANNED YOUTUBE INTERVIEW ON LONDON REAL CHANNEL ON BITCHUTE

Seriously I understand the need for work and supporting our families But even with lockdowns I see more people walking in groups having parties still gathering the cases are still growing if lockdowns stops more cases will increase and our fellow Americans that have underling health issues and our elderly will be the ones that can lose there lives because people are selfish.. I think the government needs to help with more money to help people pay there Bill’s but if you have a fat bank account and want to stop the lockdowns don’t be greedy. If want out of the house volunteer to help those less fortunate Americans. I pray we get a vaccine so our lives can go back to normal.

Do you think that govt can afford $2 trillion a month bailouts? Where do you think tat will come from and how will it be repaid?

SO GLAD THERE ARE FREEDOM FIGHTERS HERE IN VENTURA COUNTY WILLING TO TAKE ACTION AGAINST THE DRACONIAN AGENDA. I WOULD HAVE ATTENDED THIS SHOULD I HAVE KNOWN. BUT NOW I KNOW ABOUT THE NEXT ONE AND WILL BE THERE FOR SURE. LET’S STAY ORGANIZED FROM HERE ON FORWARD MY FELLOW HUMANS.

Would have loved to support this cause, but didn’t know about it. Need to know when these events are coming.
KAG 2020

If you had been reading Citizens Journal, you would know. Next one is Noon May 1- also at VC Govt Center.

And the KEYT reporter said there were only 30 people protesting. Do marxist journalism professors forbid the counting by fingers approach to math?

I saw a lot more than that on Victoria, Telephone, Ralston, Thille, etc. It as interesting that even though the event was right on their doorstep that not one County Supv or other officials showed up for 300 concerned constituents. At the last meeting, they didn’t even bother to read out loud letters submitted by the public. Did they even read them? Maybe they will take the opportunity to show up at the May 1 event.

I’m very proud of those who attended. Wish I could have been there.