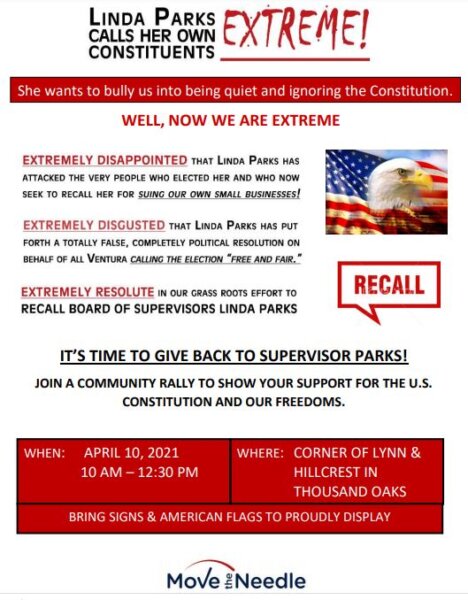 Hope to see you there!

Editor’s note: We also received this notice from the recall sponsors:

Join us Saturday, April 10 for a kick-off rally to Recall Linda Parks! (Details are below.)

Shortly after January 5, 2020 when the Board of Supervisors voted to sue 18 small businesses, a grassroots group of nearly two dozen people agreed things had gone too far. The group agreed the four supervisors who voted to sue must be recalled. Their votes made it abundantly clear these four people either do not understand the republican government model established by our Constitution or their agenda is to set our founding governing structure aside. Either way, they have acted unlawfully and unconstitutionally. Linda Parks is only the first of the four because she was the only one that a recall could be started because of a 90-day hold on officials newly elected for their current terms.

Sacramento says “no”. Linda Parks and her colleagues shrugs and say, “okay”! Other governments in California defied Sacramento. They acted for their people. Not Linda Parks!  She claims they tried in September, but  quickly took Sacramento’s “no” as a final answer.

Our government structure gives local jurisdictions a lot of authority. Linda Parks and her colleagues COULD HAVE MADE DECISIONS that helped instead of hurt our county.

Linda Parks and the supervisors have shown themselves to be even less capable and effective than the mayor of Atwater, California!

“Atwater, CA declares itself a “sanctuary city for businesses…” by Sean Adl-Tabatabai | May 17, 2020  | NEWS PUNCH 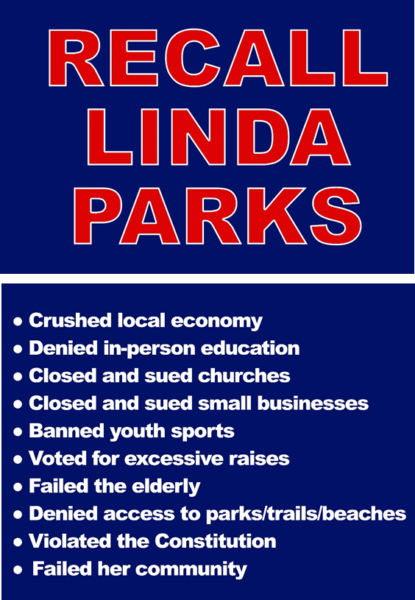 Yep! She’s good on protecting open space, plants and animals, but not people’s livelihoods and she’s a fear-monger of the virus…
She’s a huge disappointment and thank you for publishing this important rally….