2020 Election: Over One Million Ineligible Persons Registered to Vote in California

A review of California’s statewide voter database shows that 13 counties have more registered voters than eligible citizens– totaling over 1 million ineligible registrants– says Election Integrity Project, California (EIPCa). The overage was calculated by adding together each county’s active and inactive-status registrants and comparing the total to the estimated number of eligible citizens from the California Secretary of State’s (SOS) website. Both sources are dated February 18, 2020.

Six counties have the most ineligible registrants and contribute most to the one million+ ineligibles count. The full list includes Imperial, Lassen, Marin, Nevada, Plumas, Santa Clara and Siskiyou counties. 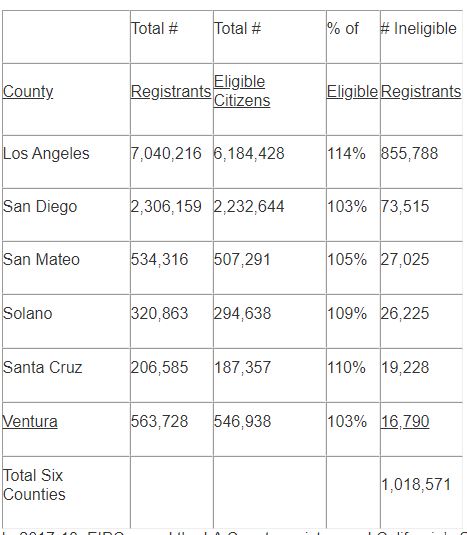 In 2017-18, EIPCa sued the LA County registrar and California’s SOS over similar findings. A settlement was reached in which the state agreed to begin removing millions of ineligible, inactive-status registrants from its rolls. While California counties research the eligibility of their inactive registrants, thousands of new voter registrations have been added through the state’s automatic DMV voter registration system, growing the list from eight counties to thirteen. While San Francisco and San Diego counties have made progress by cancelling hundreds of thousands of inactive registrants, new counties joined the list as their new registrations have accelerated.

The one million+ ineligible registrants include inactive registrants (who have not voted in years but are still registered and can vote in any election), persons who’ve likely died or relocated but remain on the active voter list, and tens of thousands of people who have two or more registrations each. EIPCa cannot quantify how many more are ineligible due to non-citizen status or other reasons.

I wish this article included details about how inactive status is determined. Many people consider voting to be a civic duty; however, merely choosing to abstain from voting for one or more elections should not get anyone’s legitimate registration revoked or suspended.

So how ineligible voters voted?