High-density housing can provide a number of important benefits to communities and the residents who live there. All else being equal, research suggests that residents in high-density communities tend to be more physically active and healthy. Their costs for utilities and transportation tend to be lower, and as a result, high-density communities may also be more environmentally sustainable as well. Higher concentrations of people also allow local governments to more efficiently support services and infrastructure. And in areas where demand for housing exceeds supply, greater density may help alleviate issues with affordability. But despite the arguments in favor of density, high-density residential construction is not the norm in the United States.

One of the reasons for this is that builders respond to market conditions when determining what types of structures to build. When demand—and prices—for single-family residences are high, builders are less likely to work on high-density projects. For example, the share of housing units authorized in high-density structures fell below 20% at the height of the housing bubble in the mid-2000s but then spiked to more than 32% when the bubble burst. For most of the decade after the Great Recession, high-density units accounted for about one-third of new authorized units, peaking at 38.4% in 2015. More recently, however, that share has begun to decline, and post-pandemic housing trends—including a greater demand for larger suburban homes—could accelerate that decline further. 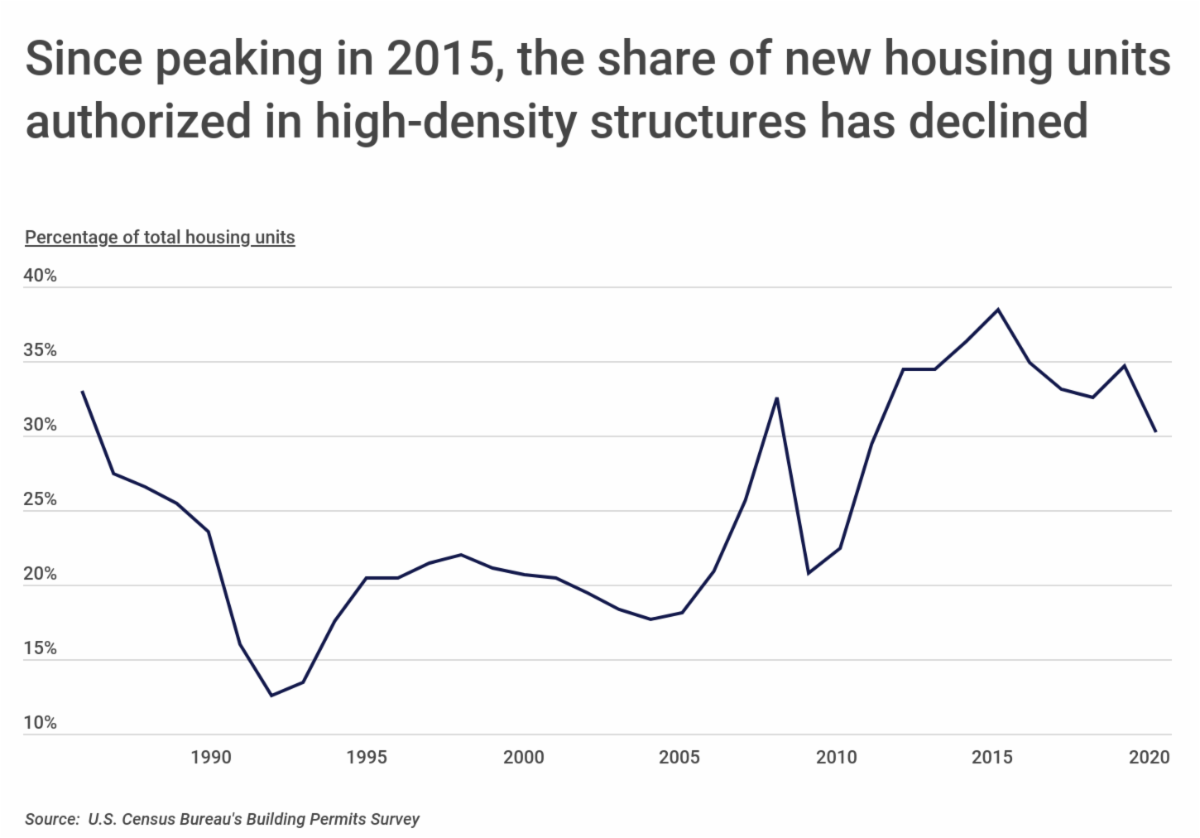 Despite the benefits of higher-density communities, Americans generally prefer the opposite, with nearly 90% of homebuyers saying they would rather live in a single-family home than a higher-density structure. And many homeowners prefer not to live near high-density housing either. The term NIMBY (“not in my backyard”) refers to the mindset of homeowners who might support an initiative in theory but oppose it occurring in their neighborhood based on concern over factors like property values, aesthetics, parking, and safety and privacy. Coordinated efforts from NIMBY groups can often lead higher-density projects to be eliminated or moved to different areas.

Opponents of NIMBY efforts note that these efforts can reflect or reinforce racial and socioeconomic disparities within a community. For example, only 3.4% of homeowners live in high-density housing, while 45% of renters live in a high-density structure. When homeowners—who usually have greater resources than renters—oppose efforts to increase density in a neighborhood, it places constraints on supply, which increases existing property values and places greater financial burdens on aspiring homeowners and renters. 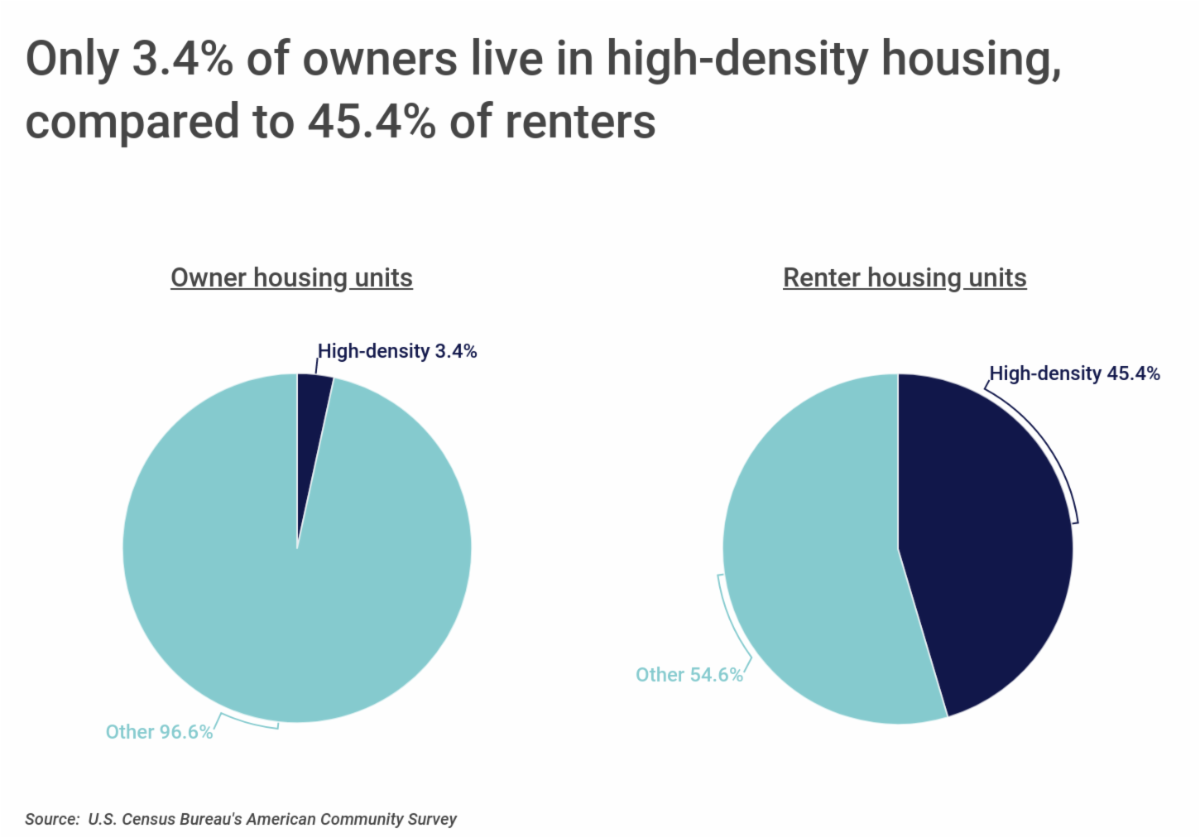 High-density housing tends to be most common in locations that have large urban areas or otherwise large populations. While there are some smaller rural states like North Dakota that have relatively high shares of high-density housing, coastal states and others that are home to large metros have the most. New York leads all states with 34.9% of housing in high-density structures, with other dense states like California (23.9%) and Massachusetts (22.2%) also ranking highly. These state rankings are driven by major metro areas like New York City in New York, San Francisco and Los Angeles in California, and Boston in Massachusetts where demand for housing is high, creating greater need for density. 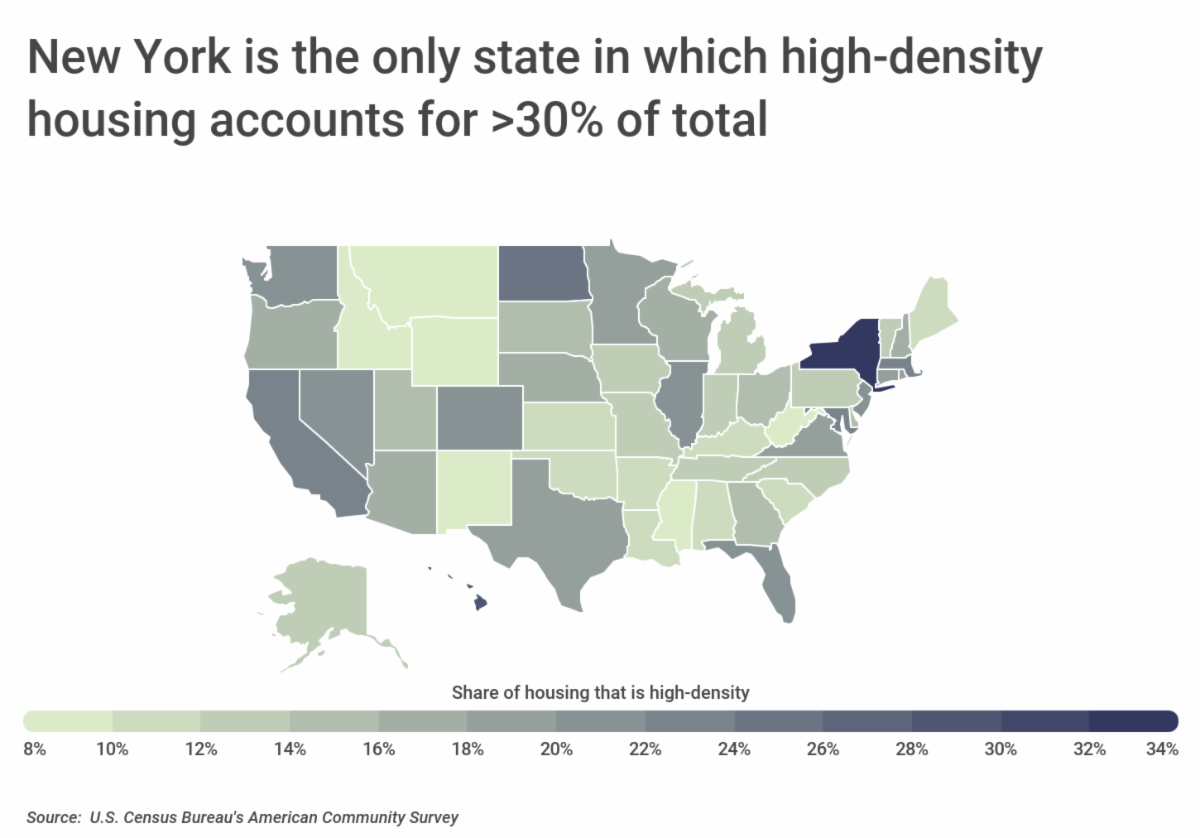 The analysis found that 23.9% of all California housing is high-density—defined as structures with five housing units or more. Out of all states, California has the 4th largest share of high-density housing. Here is a summary of the data for California:

For more information, a detailed methodology, and complete results, you can find the original report on Construction Coverage’s website: https://constructioncoverage.com/research/cities-with-the-most-high-density-housing-2022