30.7% Of California Residents Are At Risk Of Eviction/Foreclosure

When the economy spiraled down into a recession in 2020, the nation’s unemployment rate skyrocketed to 14.8% in April. A total of 22 million jobs were lost between January and April.

Amid a foundering economy and the uncertainty of a pandemic, millions of laid-off workers had to face another stark reality: how would they pay rent? The housing bubble of 2008 brought to mind the possibility of millions of homeowners defaulting on their mortgages, compounding the sting of an already painful recession. Fortunately, the CARES Act helped divert what would undoubtedly be a flash flood of foreclosures and evictions by imposing moratorium provisions. Over time, those measures evolved and were extended (including through a recent Supreme Court decision to maintain a separate eviction moratorium issued by the Centers for Disease Control and Prevention), providing ongoing relief for homeowners and renters.

As a result, the number of foreclosures reached an all-time low, plunging to just 11,000 in Q1 2021, a figure that the Federal Reserve Bank of New York said was “by far the lowest number of foreclosures we have seen since the beginning of our series in 1999.” However, the decline in foreclosures didn’t tell the whole story. While foreclosure numbers remained at unprecedented low levels due to moratoriums, renters and homeowners fell further behind on payments, according to the U.S. Census Bureau’s new Household Pulse Survey. 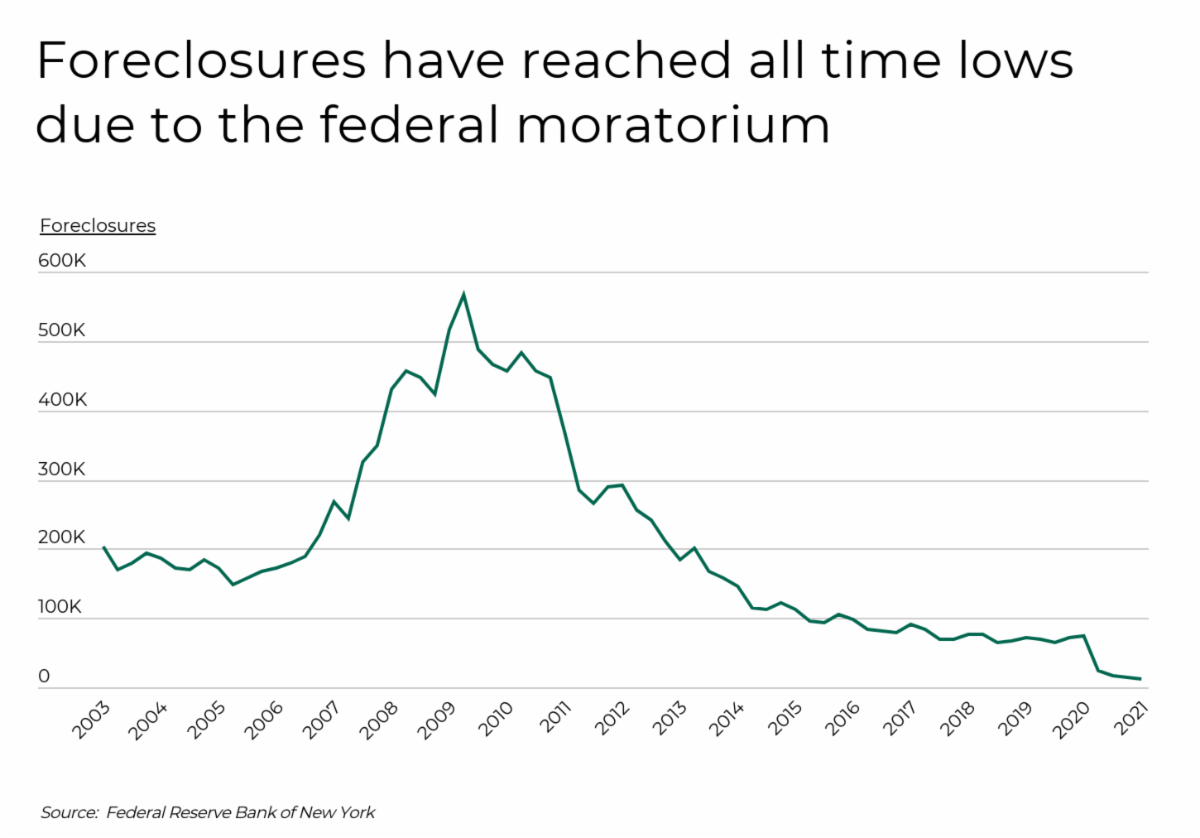 Census data collected between August 2020 and June 2021 shows that at any given time, about 6.6% of Americans were behind on their housing payments; of those, 32.4% felt they were at risk of foreclosure or eviction in the coming months. Notably, minority populations were at the greatest risk of both missing their housing payments and facing foreclosure or eviction. During that time period, 5.8% of non-Hispanic White adults reported falling behind on their rent or mortgage payments, compared to 12.0% of Asians, 14.4% of Hispanics, and 18.5% of Blacks.

Even with moratoriums in place, not all households met the criteria required to be eligible for such programs. Similar to payment status, non-Hispanic White and Asian residents were least likely to report eviction or foreclosure risk, while Hispanic and Black residents were the most likely. 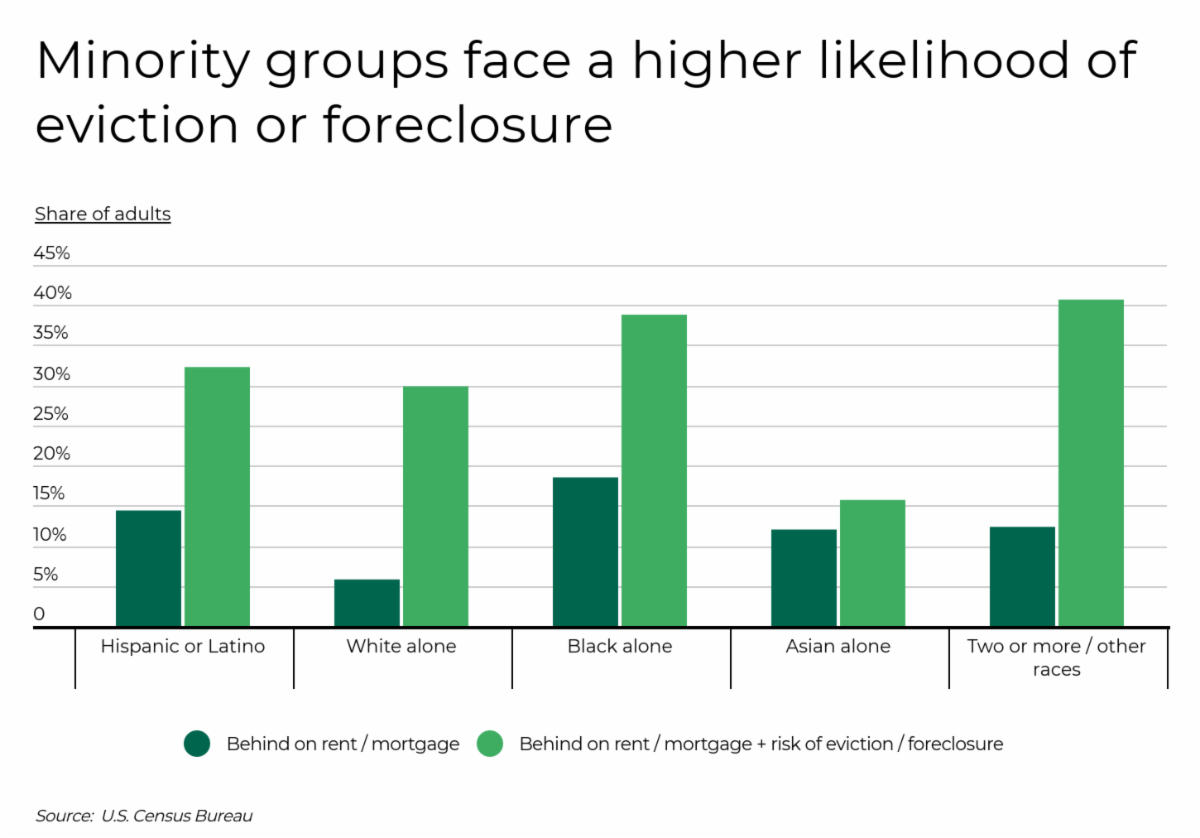 At the state level, residents in the South and Midwest reported the highest rates of foreclosure or eviction risk. Forty-one percent of adults in Louisiana who were behind on their housing payments also felt they were at risk of eviction or foreclosure, with those in Wyoming, Nevada, New Mexico, and Oklahoma close behind. All five states were at least five percentage points higher than the national rate of 32.4%.

Meanwhile, the Northeast fared the best among all regions. Seven of the 10 states with the lowest eviction or foreclosure risk were located in the Northeast, with Vermont leading the way with a nationwide low of 23.4%.

To determine the states where residents are most likely to face eviction or foreclosure, researchers at Filter buy analyzed data from the U.S. Census Bureau’s Household Pulse Survey. The researchers calculated the percentage of adults living in households behind on their rent or mortgage where eviction or foreclosure in the coming months was likely. The statistics shown are averages from August 2020 through June of 2021. In the event of a tie, the state with the higher share of adults behind on their rent or mortgage payment was ranked higher.

The analysis found that in California, 7.2% of adults are behind on their rent or mortgage. Of these renters and homeowners, 661,936—or 30.7% of them—are at risk of eviction or foreclosure. Here is a summary of the data for California:

For more information, a detailed methodology, and complete results, you can find the original report on Filterbuy’s website: https://filterbuy.com/resources/states-most-impacted-by-eviction-and-foreclosure/

There are also 30.7% of Land Lords at risk of insolvency due to this policy, if the 30.7% of renters equation is accurate.

This is a result of an election. This wasn’t as severe a problem under The Trump Administration, pre-pandemic.