4 Claims from the Fifth Democratic Debate

Here are four checks on their claims.

Claim 1: “There are only two countries in the world that don’t have paid family leave for new moms, the United States of America and Papua New Guinea,” said entrepreneur Andrew Yang.

Yang likely got this information from a March report by the Organization for Economic Cooperation and Development (OECD). The report, which examines the parental leave policies of 120 countries, found that the U.S. and Papua New Guinea were the only two without paid leave policies. A 2014 International Labor Organization report, which examined 185 countries, had the same findings.

The U.S. is the only OECD member nation that does not have guaranteed maternity leave.

Around the globe, there are several small countries lacking paid maternity leave policies, including the Federated States of Micronesia, Tonga and Palau, according to World Policy Center.

Claim 2: “During this campaign, I am proud to say that I have received more campaign contributions than any candidate at this point in an election in American history, over 4 million contributions, averaging $18 apiece,” said Vermont Sen. Bernie Sanders.

Few candidates prior to Sanders have kept public track of individual donations, according to The Washington Post, so it’s difficult to compare his donation count to others.

That being said, both his and former Secretary of State Hillary Clinton’s campaign claimed to have surpassed the 1 million donor mark during the 2016 election cycle. Sanders reached 4 million donations after the New Hampshire primary in February 2016, according to his campaign.

Sanders announced this week that he has received more than four million individual donations. At least a quarter of those contributions stem from 175,000 people across the country who have signed up to make recurring monthly donations to the campaign, according to The Washington Post.

“We wouldn’t be able to confirm that number,” explained Myles Martin, a Federal Election Commission (FEC) spokesperson, in a phone call with the Daily Caller News Foundation. “There’s a lot of information that candidates don’t have to report to the FEC. They don’t have to report identifying information for donors giving less than $200 in the aggregate, so that information is coming from the campaign, not the FEC.”

So, while there’s no official count of how many small donors have contributed to the Sanders campaign, it’s possible that he has, in fact, reached 4 million individual donations. That figure likely includes people making one contribution, as well as others making multiple contributions. 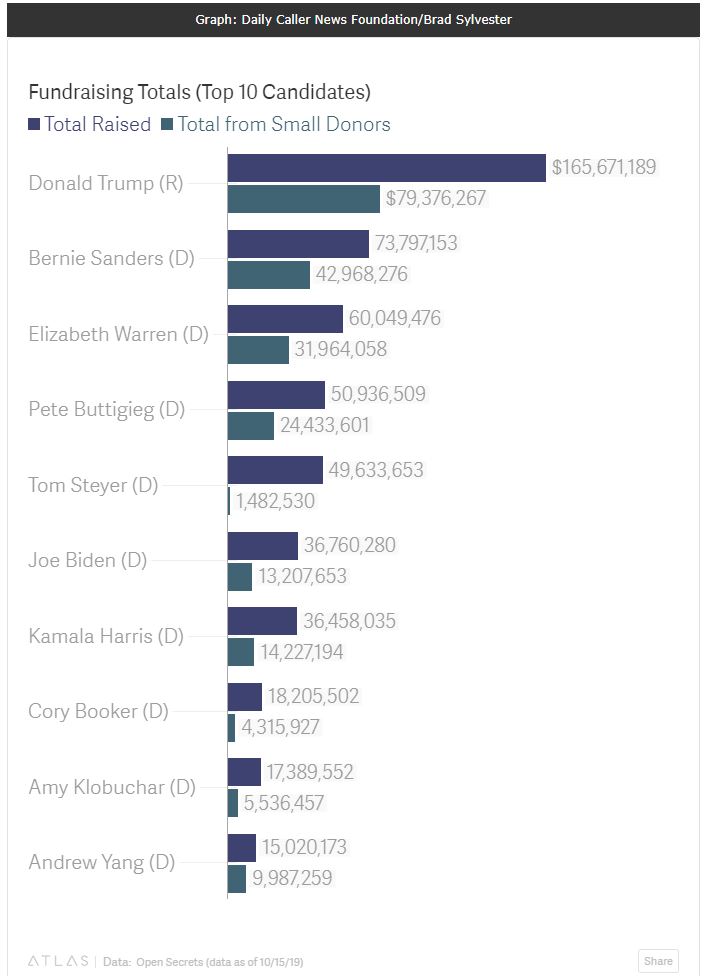 Sanders has raised nearly $74 million in contributions so far, with roughly $43 million coming from small donors, according to OpenSecrets.org. That total fundraising figure is more than $10 million higher than the next highest amount – $60 million raised by Massachusetts Sen. Elizabeth Warren.

A Kaiser Family Foundation poll published earlier this week shows that 77% of respondents who identified as Democrats favored “Medicare for All.” Support for the policy was slightly higher – 85% of Democratic voters – in an August Reuters-Ipsos poll.

Among Democratic members of the House and Senate, support for “Medicare for All” appears to be slightly lower. Only 15 of 45 Democratic senators have endorsed the Medicare for All Act put forward by Sanders earlier this year. Democratic Washington Rep. Pramila Jayapal put forward a similar proposal in the House, but it only has 118 out of the 235 total Democratic representatives as co-sponsors.

Neither measure, however, shows a vast majority of Democrats oppose “Medicare for All.”

Claim 4: “You were asked directly whether you would send our troops to Mexico to fight cartels and your answer was yes,” said Hawaii Rep. Tulsi Gabbard of South Bend, Indiana, Mayor Pete Buttigieg.

Gabbard is referring to a response Buttigieg gave at a recent Democratic forum in Los Angeles. At one point, a reporter asked him if he ever envisioned a time that American troops would go into Mexico to combat gang and drug violence “if Mexico welcomed it.”

“There is a scenario where we could have security cooperation as we do with countries around the world,” said Buttigieg. “Now, I would only order American troops into conflict if there were no other choice, if American lives were on the line, and if this were necessary in order for us to uphold our treaty obligations.”

Gabbard’s characterization of his response failed to qualify the conditions under which he would be willing to use the military – in response to treaty obligations, Mexican cartel violence or a threat to the U.S.’s security.

Elias Atienza and Trevor Schakohl contributed to this report.