7 Republicans Present At The Jan. 6 ‘Stop The Steal’ Rally That Preceded The Capitol Insurrection Won On Election Day

Seven Republicans who were present at the January 6 “Stop the Steal” rally that preceded the deadly Capitol insurrection were given the seal of approval by voters on Election Day, according to The Huffington Post.

While most of the Republicans have contended that they played no role in breaching the Capitol building, they were among the participants who took part in the demonstration that fueled the attack, pushing the debunked election theories perpetuated by former President Donald Trump regarding his election loss to now-President Joe Biden in the 2020 election.

There are likely to be additional rally participants who will remain in elective office in the coming years, as HuffPost earlier this year identified at least 57 state and local Republicans officials who were present at the Capitol riot and will face reelection in 2022. 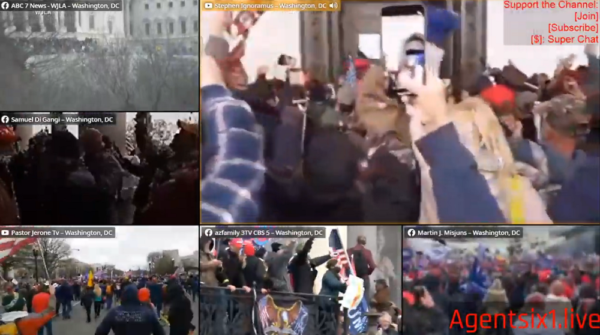 Despite the mayhem and anarchy that was a defining part of Jan. 6, many of the Republican officials who attended the rally have not been asked to step down by local parties.

The rally attendees who were reelected to office include Virginia GOP state Dels. Dave LaRock of Loudoun County and John McGuire of Goochland County, who both represent heavily Republican districts.

Earlier this year, LaRock rejected calls from Loudoun County Board of Supervisors Chair Phyllis Randall to resign over his attendance at the rally, charging that she needed to pay attention to “the needs of the colored community,” according to the Loudoun Times-Mirror. Randall, a Black woman, has served on the county board since 2016.

LaRock told the Times-Mirror that he did not know that the terminology “colored people” was racist when he issued a statement responding to the local NAACP, which called for him to be removed for office. The delegate later apologized for the comment.

McGuire was sent back to the state House of Delegates by district voters, who seemingly brushed aside his Democratic opponent releasing a photo of the delegate standing outside of the Capitol on Jan. 6. He previously claimed that he was unaware of any violence at the historic government building until his return from Washington, expressing that the insurrection “shocked and horrified” him.

Marie March, a Virginia restaurant owner who in a now-deleted Facebook post spoke of a “coming Civil War” where she would be open to “fight and die” for her “family,” was also elected to the state House of Delegates.

Other attendees who were elected to office include Natalie Jangula, who won a seat on the city council in Nampa, Idaho, and Christine Ead, who was elected to the borough council in Watchung, New Jersey.

Susan Soloway, who helped arrange transportation for Trump supporters coming to the Capitol rally and attended the event, was reelected to the Board of Commissioners in Hunterdon County, New Jersey. She said she did not enter the Capitol and reportedly gave footage of the riot to the FBI, according to HuffPost.

Matthew Lynch, a former high school teacher in Braintree, Mass., who left his teaching role after a photo of him standing outside the Capitol was sent to the FBI, was elected to the local school committee.

Several electoral races featuring rally attendees are currently still in flux, including contests for Charles Ausburger, who sought reelection on the city council of Mansfield, Connecticut, and Monica Manthey, who pursued a seat on the Annapolis, Md., city council.