Breathtaking orchid displays in a park-like setting, orchids from around the world for sale, frequent potting demonstrations, and orchid experts to answer your orchid questions- March 13th -15th, 2020 at Earl Warren Showgrounds.  More than fifty displays: inspired by the ORCHID Adventure theme and celebrating the 75 years of the Show, which is the longest-running orchid show in the US.  Inaugural Grand Marshall:  local hero and newscaster John Palminteri epitomizes the Adventure theme. 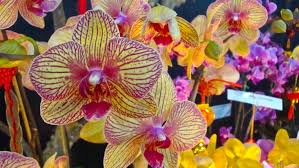 “Orchids – A World of Adventure” might bring to mind Sir Joseph Banks’ voyage to the South Seas in 1768; or simply Susan Orleans’ “The Orchid Thief” on a bed-side table in 1998.  The 75th Anniversary brings to mind “The Million Dollar Cymbidium Bed” of the 1950’s at Dos Pueblos Orchid Company; Meryl Streep’s attendance in 2001 for the filming of “Adaptation”; and Huell Howser’s visit in 2010 to tape his “Road Trip” show.

Using thousands of exotic orchid species and hybrids, diverse in color, pattern, & shape, the Display Hall is transformed into a park-like setting with magnificent vistas and flowering orchid plants cascading down raised beds. Plus exquisite floral vignettes, orchid art, and entertaining educational displays.  Standouts from 2019 were a Japanese forest floored with Cymbidium goeringii, Cinderella and her orchid-covered companions & accessories, and a visit to Tahitian Vanilla farm.  In 2020, local newscaster John Palminteri will be the inaugural Grand Marshall in honor of his decades of dedication to the Santa Barbara community, especially in recent times of need.

The “Orchid Doctor” will answer your orchid culture questions one-on-one.  Sit a while at the “Potting Tent” to see the expert potting of Phalaenopsis, Cymbidium, and Laelia plus ask more orchid questions.  The Vendor Hall hosts orchid growers from near and far.

The mission of the Show is to educate the public about the 25,000 species of orchids in the wild, promote their conservation and study in nature and in collections, encourage successful orchid growing by the general public, and document the history of amateur and professional orchid growing in Santa Barbara and Ventura counties.