An 8-year-old girl with autism has decided to spend her time in lockdown due to the pandemic baking scones for pensioners and vulnerable citizens, and it’s warming hearts across the globe.

Eight-year-old Riah Totten’s favorite thing in the world to do is play football. But when lockdowns to slow the spread of the virus prevented the Belfast girl from getting outside to kick the ball around with friends, she decided to spend her time doing something to cheer others up instead—and has baked hundreds of scones for senior citizens and other vulnerable communities in her neighborhood since she first stepped into the kitchen. 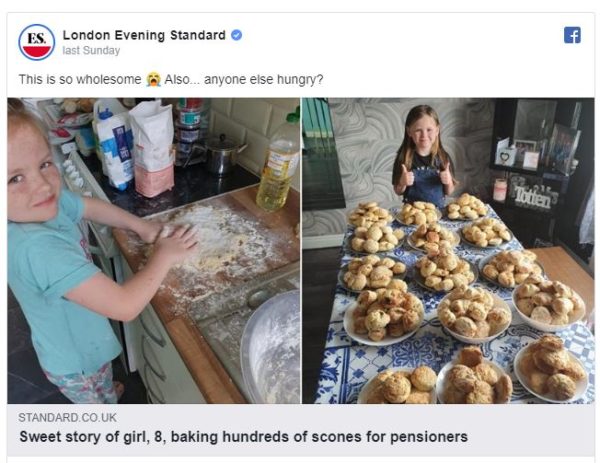 Riah’s mother, Amanda Dobbin, explained that the young girl was struggling with finding a way to amuse herself during quarantine after schools in her area closed. So, Dobbin’s mother dropped off some baking supplies in hopes that it would keep Riah occupied.

Sure enough, the primary-school-aged footballer has seamlessly transitioned into a budding young chef.

“She was struggling with the restrictions but she was happy being off because she doesn’t like school anyway,” Dobbin told local news. 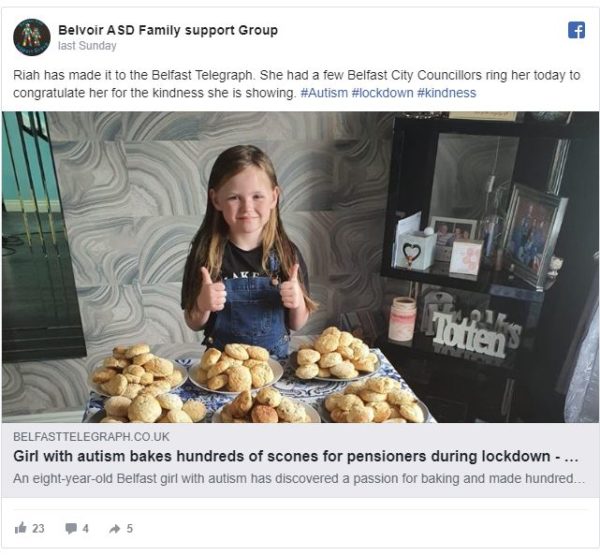 The mom added, “But the cooking started when my mom dropped some baking stuff for the kids. Riah would sometimes get obsessed with things so when she started baking scones she got obsessed with it.

The scones have found patrons across the community, as Riah and her mother have decided to distribute the delicious baked goods to everyone from senior citizens to members of the local Belvoir ASD (Autism Spectrum Disorder) support group. They’ve even gone back to Clonduff, where the family lived prior to arriving in Belvoir; in total, they’ve distributed prepackaged bags of scones across the Ravenhill, Clonduff, Belvoir, and Cregagh areas. 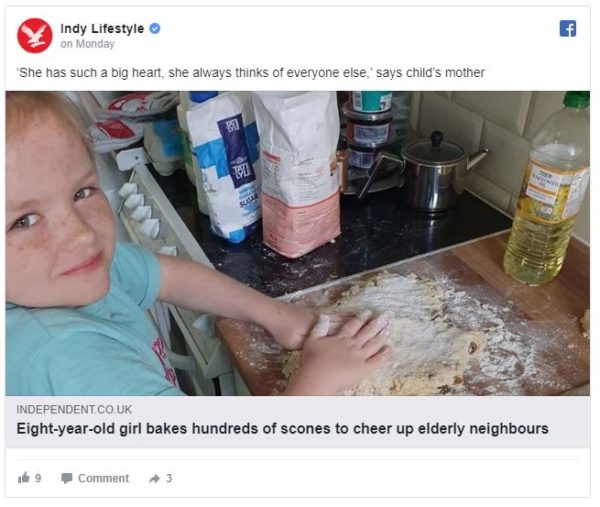 For Riah, Dobbin explained, it hasn’t been the loss of school itself that’s been the most difficult—but some of the restrictions that have been put in place to prevent the rapid spread of the virus. The baking has helped the young girl to focus her attention elsewhere, giving her a singular focus that can keep her distracted for hours at a time.

Now, the biggest problem might be convincing Riah to head back to school again once quarantine ends!

“It’s just taken off, she loves it,” said Dobbin. “She says that Gordon Ramsay inspires her and now thinks she doesn’t need to go back to school because she wants to open a scone shop and work there all day.

“She has such a big heart, she always thinks of everyone else.”

It’s tough to pinpoint exactly how long it will take communities to open back up, which could pose some struggles if Riah starts to run out of baking supplies. But as long as she’s got a spatula and her ingredients—it took her 4 liters (approx. 1 gallon) of milk, 6 bags of self-raising flour, a bag of sugar, 12 eggs, a bottle of cooking oil, and salt to get her massive quantities of scones into the oven and out the door for others—she should be in business.