Saturday night, November 29th in Thousand Oaks, over fifty people braved the cold, it was under 50 degrees which is cold for Southern Californians.  The gathering, organized by Move the Needle, had two purposes.  First they were collecting unwrapped gifts for Christmas with the plan of taking them to the Simi Valley police later in the month for the annual Toys for Tots effort.  They gathered quite a few to put under the tree out in front of the Original Pizza Cookery at 75 W. Thousand Oaks Blvd.

The second purpose of the event, and really the main reason, was to protest Governor Newsom’s latest inane edict in which he imposed a curfew from 10 PM to 5 AM. The curfew started on November 21st and will last until December 21st.  This move is supposedly done to stop the spread of COVID 19, though for most it remains unclear the reasoning behind the order.  Is it to kill off the bars and movie theaters, any business that may be open past 10 PM, or is the virus more virulent between those hours? Who knows.  In any case the protest started at 9 PM and lasted until around 11PM.  Pie and glazed donuts were offered by the Cookery and the organizers led the gathering in a rousing chant of,  “Newsom Sucks.”  BTW, they weren’t all that fond of the mainstream media either. 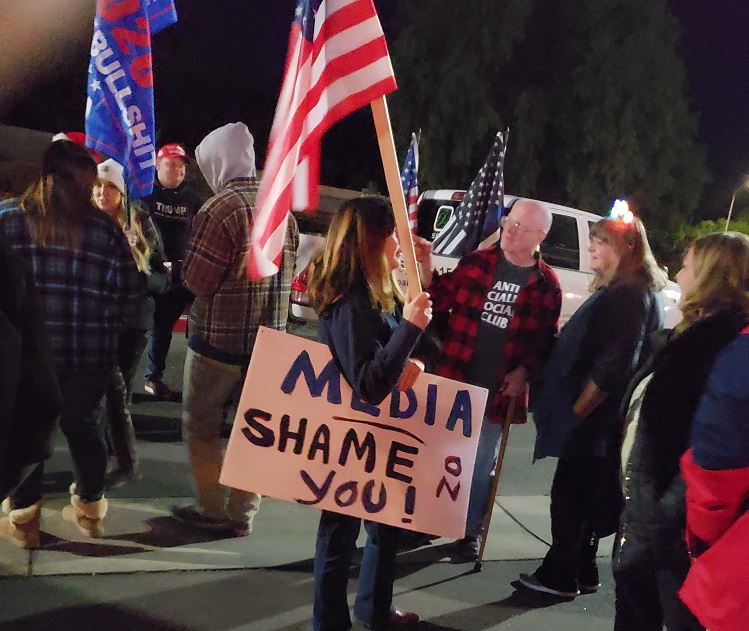 Move the Needle plans more such rallies in the future.  Maybe the governor has finally crossed the line after “dinnergate” at the pricy French Laundry.  No social distancing, no masks, twenty two in attendance and a bar bill of over $15,000 just doesn’t sit well with the folks.  People are losing their livelihoods along with their patience. The sentiment last night can be summed up this way – We’ve had enough! 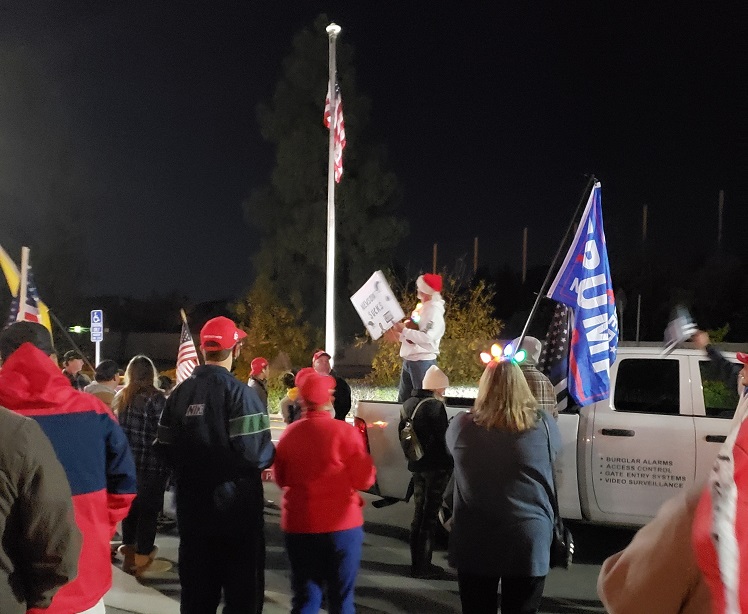 No vaccine for you

# public service announcement# If you Support Anquifa or BLM you are now deemed an enemy combatant. We Refuse to Coexist.

How you want to deal with your existence is your own stuff.
It certainly isn’t going to change anything though 🙂

Nothing says Christmas like a photo of a crude handmade sign depicting defecating dogs against a lovely backdrop of Toys for Tots gifts and a glittering Christmas tree. Stay classy, Citizens-Journal!

Kudos to the demonstrators . The CNN scripted Newsome responses are proof positive that illiteracy is alive and well in California

Ooooh, look at all the Darwin Award nominees.
Wear your damn masks people!

This just proves any idiot can pretend to be a journalist. The only thing that should be fixed are Trump supporters.

See the photos above?

Newsom’s orders are intended to minimize the threat of an out of control pandemic. He doesn’t want to see businesses fail or the economy worsen. He has his priorities right. Health of the American people comes first.

A guy
Reply to  Bear

But don’t tell that to the “freedom” squad.

Sounds like a bunch of Kool-aid drinking Trumper anarchists to me.

Californian’s aren’t citizens, they’re hostages. In addition when they vote, they vote stupidly, “TAX ME MORE” they scream. The goofball Governor was easily elected. Did he even campaign? Do campaigns even matter? Is California like a third world country? Did Biden campaign? Barely. Did he know in advance the fix was in? Are we now no better than Venezuela? Not by much it appears. California is what America’s future looks like.

Bear
Reply to  Michael A.

You need to stop believing false theories that are promoted by QAnon and OAN.

A guy
Reply to  Bear

Bear
Reply to  Michael A.

California is the future. Trumpers are living in the past

The worked out so well that last time we recalled a governor.

If at first you don’t succeed, try, try again. Seriously, tiny tyrant Newsom has GOT TO GO!

So glad to read this. Just sorry I wasn’t there. Keep up the good protests!
Yes, he and his policies do suck.

A guy
Reply to  Naomi Fisher