A History, Review And Current Discussions Regarding The Camarillo Airport 1976 Joint Powers Agreement(JPA)

In a land that time forgot, when Nehru shirts and love beads were standard fare, there was Oxnard Air Force Base, which was actually in Camarillo. It was decommissioned on January 1, 1970, and for anyone who lived in Camarillo at the time, the politics of the airport raged until October 13, 1976, when the City of Camarillo finalized an agreement with the County of Ventura to share control of the decision-making process with regards to air operations at the facility.

The County of Ventura would own and manage the airport, and the City of Camarillo, which was in the flight path of the airport, would have a say in any future expansion of the air operations. The agreement came to be known as the Camarillo Airport Joint Powers Agreement (JPA) and it would last forever.

Fast forward to 2018 and a Project called CloudNine and it does not seem so important the City of Camarillo and the County of Ventura are sharing the decision making at Camarillo Airport. Or maybe it is important? The CloudNine hangar proposal, which was bid and accepted by the County of Ventura in 2018, will build some extremely comfortable, high end facilities for business aircraft owners on the Northeast corner of Camarillo Airport. 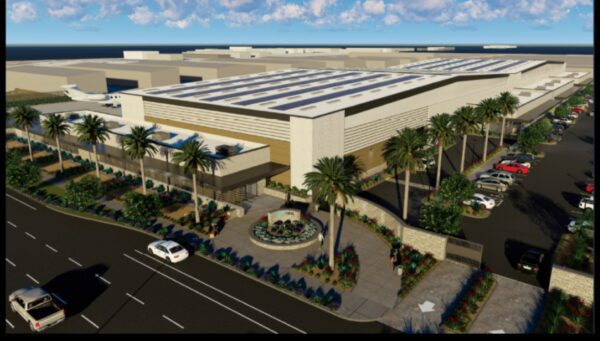 RKR, a well-established 30-year developer in Westlake Village has an executed lease with the County of Ventura. The CloudNine website is here .

The Camarillo City Council established an Ad Hoc Committee to look into all things CloudNine on April 28th, 2021, and Camarillo also hired the Rosales law firm to look into all matters concerning the airport in the same time frame. For anyone who has not noticed, that would be in excess of 24 months post CloudNine concept. The committee was formed after the city received a letter dated 13 April 2021 from the Director of Ventura County Airports, requesting a renegotiation of the 1976 JPA which can be read here.

Much has been made about another communication from the Ventura County Director of Airports Kip Turner. In that letter dated 31 Dec 2019 he states the 737 aircraft numbers reported in the CloudNine paperwork are only in reference to air quality and noise standards (Exhibit 1 Table B1 and B2). The actual proposal references Aviation Environmental Design Tool (AEDT) information regarding 737-700 aircraft as Mr. Turner claims. The really odd fact concerning this proposal is the CloudNine facility will NOT be built to support any aircraft over 115,000 lbs. (twin wheel).

RKR was required to capture the largest airframes that can or have used the airport and are authorized for landings per Federal Regulations. So, what seems odd is standard for EIR filings. Forecasting the maximum environmental footprint for each type of airframe is the “worst case” environmental impact. CloudNine had no tenants or contracts at the time of their county submittal. The actual drawings of the hangars RKR will build do not meet the requirements of a Boeing 737, yet they is required to buildout their approach and taxi area to manage a 737 airframe on their tarmac. So, why not avoid the issue completely, agree to the stipulation the City of Camarillo is requesting, and fly the friendly skies of unity in the 2050s? The County of Ventura said no, as that would set a precedent that no other FBO or hangar had to concede prior to finalizing an agreement with the County.

The JPA was originally executed in perpetuity, per paragraph15 of the agreement. State and Federal Courts will not defend the perpetuity clause of a contract, meaning it cannot be used as an argument in court to keep any agreement intact. Should the City of Camarillo and the County of Ventura fail to arrive at a bargain both can live with concerning changes to the existing JPA, a court case most likely will hinge on the fact Camarillo or Ventura County cannot exit or negotiate without the consent of the other party. “Evergreen” contracts are more enforceable, as the duration of the agreement is set, with renewals for agreed upon terms. Terms that are negotiated before each renewal of the contract. Given the political climate when the original Joint Powers Agreement was set, possibly the perpetuity clause was necessary to keep citizens in Camarillo satisfied they had some control over airport operations.

In addition to the perpetuity clause, the Civil Aeronautics Board(CAB) referenced in Attachment 1, and identified as a body which defines air carriers used by the public was dissolved in 1985.  All regulatory duties under CAB were assigned to the Federal Aviation Administration (FAA) and other agencies. The Camarillo Airport JPA seeks guidance from the CAB with no verbiage to identify “or other agency which may assume CAB duties in the future”. In essence, removing the ability of any member of the JPA to cite or request clarification of an issue from a government agency. The same Attachment 1 references a PUC, which does not appear to exist. If one wants to believe the intent of this reference was the California Public Utilities Commission (CPUC) that is a problem. This agency no longer regulates or oversees aircraft since these duties were transferred to other agencies on 1 July 2018. As with the CAB stipulation in Attachment 1, there is no language which refers to “or other such agency which regulates”. so, there is no government authority to seek guidance and direction concerning disputes involving the management of the airport with the JPA, until such language is negotiated.

What has yet to be answered is why the City of Camarillo has taken a position that the JPA is a document that is enforceable when an internet search of “Perpetuity Clauses” reveals such clauses have never sustained a court challenge on a State, or Federal District level? The Courts have sought to move agreements such as the Camarillo JPA to an “at will” status when there are no provisions for either party to individually notify and seek to modify an agreement. As Camarillo prepares to spend tax dollars to ask its constituents how they feel about the future of Camarillo Airport, the city may be better served to be straightforward regarding just how much influence they currently have with the existing JPA.

The City of Camarillo holds firm that JPA is an enforceable document in its current form, with no changes. Community Affairs Officer Michelle D’Anna assured me Camarillo and Ventura County are exploring their differences, but the 1976 Agreement should remain in place. Michelle D’Anna responded many of the questions I have are answered on the Hot Topics section of the Camarillo website, but agreed the 13 April 2021 letter is only available from Camarillo if a person would request it through a records request at the City Clerk’s office in Camarillo. During my conversation with Michele D’Anna, she found the reference to the 13 April 2021 letter  within a different page in a 9 June 2021 press release. It was not removed, but is not linkable. Michelle stands firm that Kip Turner’s letter does not need to be revealed on the website, though a number of other letters between the City and County are with links to the documents on the Camarillo Airport page.

The only place a person can view the document at this point without a records request from the City of Camarillo is in this article. It may also be available from the Ventura County Airport office, as the letter is an attachment in the discussions that were postponed in their meeting this evening. It was learned just before the meeting that Kip Turner has resigned as Director of Airports, and will be leaving his position later this month. .