Anatomy of an Election Steal

I summarized 2020 election fraud types in my previous editorial: Election 2020: The Empire Strikes Back. But we have learned more about a massive one that deserves additional attention so that the public can be made more aware of it and demand that action be taken. 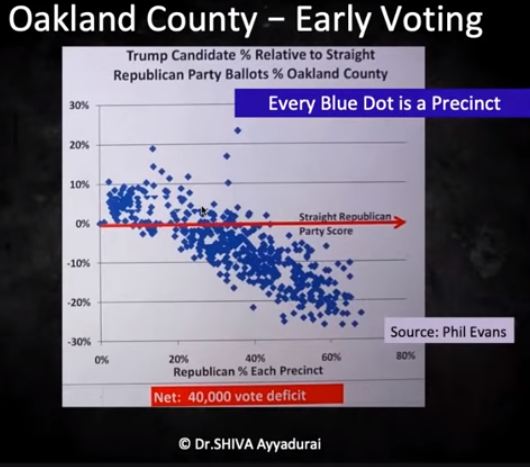 The problem shown in the above chart, if widespread, even excluding the dozens of other types of alleged fraud, could be the the end of Biden’s campaign, sunk in disgrace by massive election fraud. We have seen dozens of credible alleged election fraud reports. We have also seen some that are flaky. This one is not, and it’s only one of them. It is analogous to saying cigarettes cause lung cancer, without having actual slam dunk physical medical proof, but overwhelming statistics to support it. As a result, billions have been paid for legal settlements, people are smoking less and lung cancer is dropping.

All analyses for three of the four studied Michigan counties- Oakland, MacComb, Kent-  checked suggest vote manipulation was nearly certainly done. The fourth county, Wayne, which is mostly Detroit, is heavily Democrat and does not appear to have been manipulated thusly.

The study suggests that the vote swing from Trump to Biden was 138,000: 69,000 removed from Trump and those 69,000 then reassigned electronically to Biden.

It may be necessary to hand count and audit every darned ballot to prove the point and get the totals fixed, though.

Watch the details from the man himself if you would invest the time: 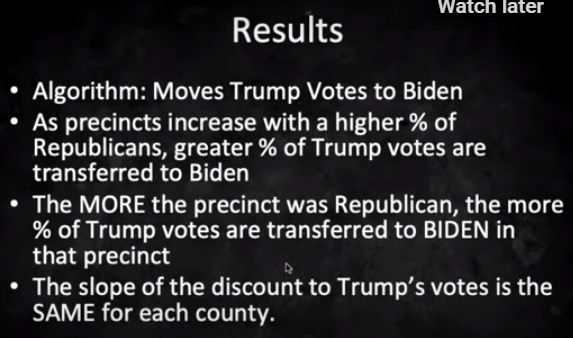 Not long ago, a brave, stubborn lady in small Antrim County. Michigan detected some vote tally anomalies and had the ballots recounted by hand. The result was a 6,000 vote swing that changed a Biden win to a Trump win in her county. She suggested that the Dominion election software was at fault but had no real analysis to point to why, except the large vote discrepancy when compared with the hand count. The NY Times and other leftwing publications quickly disputed that and other similar claims, attributing the errors instead to election authority system setup and tallying errors. Interestingly, MIT Professor Dr. Shiva mentioned that election people talked to during his research elsewhere professed not to understand much about how the system worked and mostly had vendor personnel set it up.

Dr. Shiva took an interest in reports he had seen and did a statistical analysis of four large Michigan counties, which led him to draw shocking conclusions: namely that the election in  three counties he analyzed had been algorithmically gamed by the voting systems.

How he uncovered the hidden, devious, audacious and thoroughly illegal alleged fraud was  clever, but actually straightforward.

He analyzed just how Republican districts were, then looked to see how much the actual votes for Trump varied from the Republican voter registration percentages. He plotted these out on charts, where the x-axis (horizontal) plotted districts, from the most Democrat on the left to most Republican on the right. The Y-axis (vertical) was how much variation there was from the registration percentages. He presupposed that some Republicans might be fed up with Trump and vote against him and some non-Republicans would vote for him, too. In the predominantly Democrat districts, that was very true and votes for Trump were considerably higher for Trump than the percentage of Republicans in those districts.

But here’s where things got really weird. The higher the percentage of Republican voters in districts, the lower the positive deviation in votes was. That was not only very improbable but the trend line slope was straight linear, suggesting an algorithmicallly-based shift. If you’d like to challenge that, I suggest that you first watch Dr. Shiva’s video linked above in full.

The only exception was Wayne County, which did not show any such skewing of  the votes as recorded by the Dominion system. Wayne County is the Detroit area, heavily Democrat and black.

He also points out that the standard software in this system allows such alterations to be made. Why would this be so? Are these voting machines or gaming machines? How widespread is this problem and what is the impact on electoral results. Such analyses need to be done on a wider scale and acted upon-quickly.

Meanwhile, the NY Times is telling us how massive election fraud in the US is just about impossible, because well, it would involve a massive conspiracy and that just isn’t really possible in our enlightened “democracy” with all of its democratic institutions, high morals and checks ‘n balances ….

I guess by now even the losers see how incredibly stupid this “article” is. The only one trying to steal anything was the Orange fat man. Even his sexual interest Ivanka says so.

Thank you. It seems quite convincing. Giuliani and crew seem to have the same or more supporting info on a global scale. Never quit, we will fight till the end. Lets get rid of some RINO’s in the process.