Apprehension of a pursuit suspect in Simi Valley

On June 27, 2021, at approximately 7:30 PM the Ventura County Sheriff’s Department requested the Simi Valley Police Department’s assistance with a pursuit of a hit and run suspect that led into the City of Simi Valley.  The suspect vehicle was descriped as a white Ford F-150 pick-up truck.  As SVPD units attempted to catch up to the pursuit, the vehicle was lost and the pursuit was terminated.

A short time later, a citizen reported that a white Ford F-150 pick-up truck had collided with a fire hydrant and several other vehicles in the area of Patricia Ave. and Duncan St.  SVPD units arrived on scene and determined that the vehicle was related to the pursuit initiated by the Ventura County Sheriff’s Department.  The driver was subsequently arrested by the Ventura County Sheriff’s Department and the Simi Valley Police Department is investigating the collision. 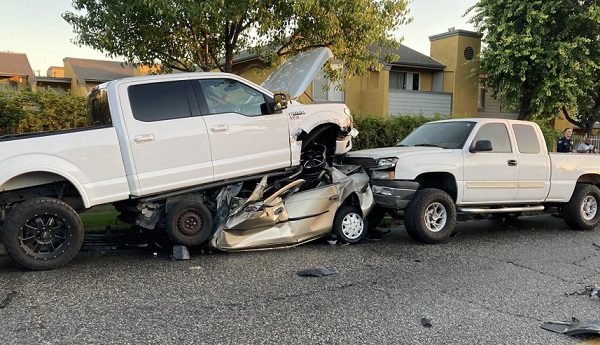 It was a good looking truck, until you really messed it up !