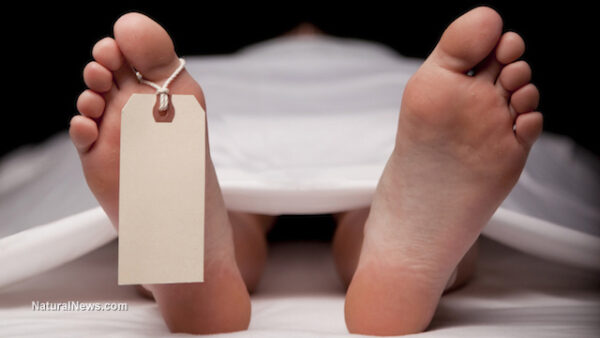 Kristin Reilly died with a gunshot wound in her head last year.

But Colorado officials said the actual cause of her death was COVID-19.

Likewise her husband, Lucais Reilly, after allegedly shooting his wife in the head, turned the gun on himself and committed suicide.

He also died of COVID, the bureaucracy in the far-left state determined.

The details are from a new report from investigative reporter Sharyl Attkisson, who noted the explanation from coroner Brenda Bock in Grand County, where those two deaths happened.

“I had a homicide-suicide the end of November [2020], and the very next day it showed up on the state website as COVID deaths,” Bock said. “And they were gunshot wounds. And I questioned that immediately because I had not even signed off the death certificates yet, and the state was already reporting them as COVID deaths.”

Bock explained that nowhere in the death certificates is COVID mentioned.

“So we have a homicide, suicide, nothing to do with COVID.

That case, however, had nothing on the two later Grand County “deaths” that “popped up on the state’s COVID count,” Attkisson explained.

That’s because those people “were actually still alive.”

The county commissioners asked the state to correct its reporting and eventually, some adjustment was made, but James Caruso, chief medical examiner in Denver, said the same issue was found statewide.

He told Attkisson, “I think early on, the people signing the death certificates probably were doing it accurately. But at some level – maybe the state level, maybe the federal level – there’s a possibility that they were cross-refrencing COVID tests. And that people who tested positive for COVID were listed as a COVID-related death, regardless of their true cause of death.”

He said he warned the state Department of Public Safety that there were, in fact, significant differences between dying “of” COVID or “with” COVID.

At issue is the death toll in the United States being blamed on the virus that likely escaped from a Chinese research facility where scientists work on how to make them more dangerous.

Some 640,000 deaths in the United States have been blamed on COVID since it arrived early in 2020. Some charge the death toll is much higher, some lower.

But it has been blatantly political, with legacy media organizations blaming President Trump for the first 300,000 or 400,000 deaths that happened during his presidency.

But they’ve been conspicuously silent on about the same number of deaths under Biden’s presidency.

Bock told Attkisson she discussed the errors in the state’s system with Gov. Jared Polis.

“He told me he didn’t believe it was right, but he wasn’t going to have them remove it [the homicide and suicide victims] from the count because all the other states were doing it that way so we were going to also.”

Polis refused to be interviewed by Attkisson, but a spokesman said the state website added a note explaining some deaths “occurred when the individual had COVID-19.”

Under Polis’ tenure, the state of Colorado has reported just under 14,000 “COVID” deaths, with about half of those dying “with” COVID.

Attkisson reported, “The obvious implications are huge. If such a significant number of Colorado’s ‘COVID deaths’ weren’t directly caused by COVID, or even related at all in some cases, and if that bears out in other states, it means the national totals we’ve heard since the start of the pandemic could be largely misleading.”

Dr. Deborah Birx, who is on the White House Coronavirus Task Force, said the process is simple.

“If someone dies with COVID-19, we are counting that as a COVID-19 death,” she has said.

That leads in Colorado to COVID deaths in traffic accidents and nursing home deaths, “even though the attending physicians said they weren’t related to coronavirus,” Attkisson reported.

In Nashville, Hal Short died of cancer after testing negative for COVID, but his wife still saw his death described as being caused by COVID, Attkisson reported.

Bock explained to Attkisson, “I believe Covid is real. And I believe people do get very sick from it. And I do believe a small number do die from that. I do not believe a homicide-suicide belongs in that number.”