The Foundation for Individual Rights in Education (FIRE), a nonprofit organization that fights for free speech and due process on college campuses, has sent a mobile billboard truck to circle around Emerson College’s campus to congratulate the institution for being elected “one of the 10 worst colleges for freedom of expression.”

FIRE released its annual list of “the worst campus censors over the last year” Feb. 2. Emerson earned its spot for punishing students for criticizing the Chinese government. 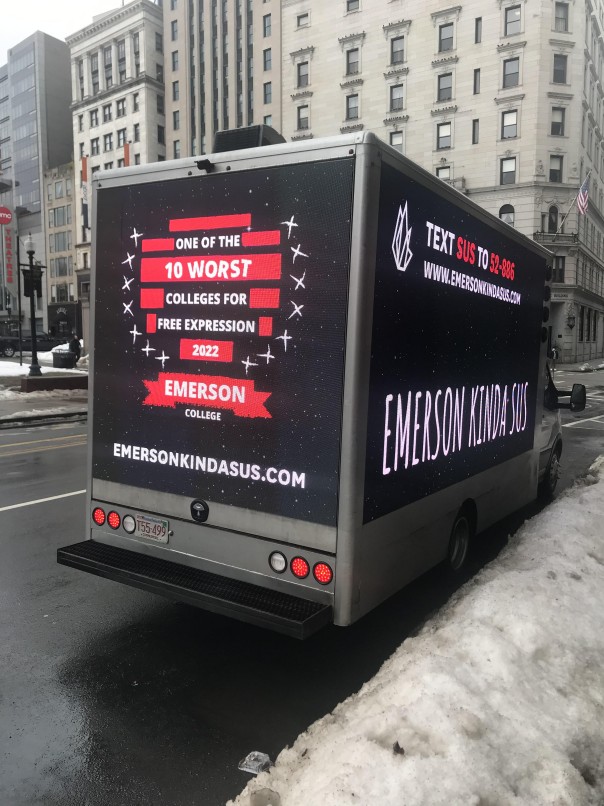 Emerson College punished Turning Point USA, the right-of-center student organization where I serve as chapter president, for distributing stickers critical of the Chinese Communist Party last fall. The sticker had the phrase “China Kinda Sus” – “sus” being short for “suspicious” – along with the symbol of the CCP, which should make it obvious that it was referring to the tyrannical government of China.

William Gilligan, Emerson College’s interim president, sent an email to students on Sept. 30 calling the stickers “anti-Asian bigotry” and promising an investigation into the matter. Turning Point USA was suspended from campus under allegations of “bias-related behavior” and prohibited from hosting any meetings or events pending the resolution of the investigation.

Aside from congratulating Emerson for the achievement, the mobile billboard truck also directs people to the website EmersonKindaSus.com, where viewers can hear the full story.

On Oct. 5, FIRE reached out to Emerson College to remind school officials that “freedom of expression entails the right to criticize not only our own governments but those of foreign nations, even when that criticism is offensive.”

The school’s Community Standards Department conducted an investigation and concluded that the “China Kinda Sus” stickers did not intend to target anyone other than the Chinese government, but then proceed to punish the organization regardless for allegedly creating “a hostile, intimidating or offensive working, living or learning environment.”

The organization was prohibited from handing out the stickers and hit with a formal warning, which could potentially lead to harsher sanctions if the group is found responsible for a subsequent violation. The organization unsuccessfully appealed the decision.

The college justified its suppression of free speech on the basis that the anti-CCP stickers contributed to “anti-Asian discrimination that has developed over the past few years particularly in the wake of the Covid pandemic.” It’s an absurd justification for censorship, one you might expect from the tyrannical government that the “China Kinda Sus” stickers intended to criticize, but not from an American college.

While Emerson College ruled that anti-CCP stickers somehow “create a hostile environment” for Asian students, the only Asian student who actually faced any hostility because of them was Turning Point USA’s vice president, KJ Lynum, who dropped out of college last semester due to the bullying and threats she had been receiving from college administrators, professors and other students. The only person who created a “hostile environment” for Asian students was an “anti-Asian bigot” named William Gilligan.

“I was born in Singapore, so to be called ‘anti-Asian’ was very strange,” said Lynum.

Committed to Freedom of Expression (?)

Emerson College makes laudable commitments to freedom of expression. Its policies emphasize “the high importance of the First Amendment” and urge that “freedom of speech is not only a right but a community responsibility.” Emerson’s failure to live up to its own promises sets a very dangerous precedent. Now all students and faculty will suspect that their rights mean nothing to the college.

“Why is the college whose motto is ‘Expression Necessary to Evolution’ silencing their students?” FIRE said on EmersonKindaSus.com. “Emerson’s decision to punish the group despite the facts shows the school’s utter disregard for its own free speech promises.”

“Emerson, in taking action against its TPUSA chapter, broke its promises of freedom of expression,” Steinbaugh said. “The display itself is intended to draw attention to the fact that Emerson made this decision knowingly. They were reminded of their free speech promises and decided to abandon them. That requires a response.”

FIRE is not a conservative organization. The organization fights for freedom of speech regardless of viewpoint. Recently, FIRE defended 1619 Project founder Nikole Hannah-Jones, a Stanford law student who sent a satirical email inviting people to a fake Federalist Society event named “Originalist Case for Inciting Insurrection” scheduled for Jan. 6, and University of Kentucky female students who mocked a pro-life demonstration by saying “no uterus, no opinion.”

“We’ve supported chapters of TPUSA and we’ve also supported people who got in trouble for flipping off members of TPUSA,” Steinbaugh said. “To us, it’s not about what is said, it’s about the right to say it.”

The list claims Emerson earned its spot on the list for “bravely [censoring] its own students so China’s government wouldn’t have to.”

Ahead of the 2022 Winter Olympic Games in Beijing, Chinese officials told Olympic athletes that they could face “punishment” for speaking up against the CCP’s human rights violations. A Dutch reporter was dragged away by Chinese agents as he was reporting live from the Beijing Olympics.

Congratulations to Emerson College and William Gilligan for this great achievement of being one of the 10 greatest censors in American higher education. Xi Jinping is very proud of you.

Sam Neves is a former leftist and a correspondent for Campus Reform. He is a marketing major at Emerson College. After graduation, Sam plans to attend law school and continue his mission to fight for people who don’t have a voice.