The head of the Customs and Border Protection (CBP) agency revealed that the construction of the U.S.-Mexico border wall has remained a high priority during the pandemic, and the barrier is going up faster than before.

President Donald Trump has long said that building the wall to curb illegal immigration into the United States will be a cornerstone of his administration, drawing much controversy and praise. Trump and other top White House officials said they aim to complete 450 miles of border wall by the end of 2020, but courts and Congress have both limited funding.

“This pandemic has not slowed the construction of the border wall system. In fact, we’re increasing the pace of construction,” Acting CBP Commissioner Mark Morgan told Fox News on Thursday. “COVID-19 should be a wake-up call for all Americans that border security is national security. Preventing and slowing down the introduction of a deadly virus into the U.S. from outside our borders is exactly why border security matters, and why the wall matters.”

So far, 182 miles of the wall has been built, according to Morgan. Much of that construction was in places where a barrier had already existed, although the old structure could easily be bypassed by those looking to get into the country.

“Border security is national security and the border wall system is a priority in protecting the American people. We’ve been consistent about our need for a wall, and we are full steam ahead on its construction,” he told the news outlet.

Morgan added in the interview that it doesn’t take only a wall to secure the border. 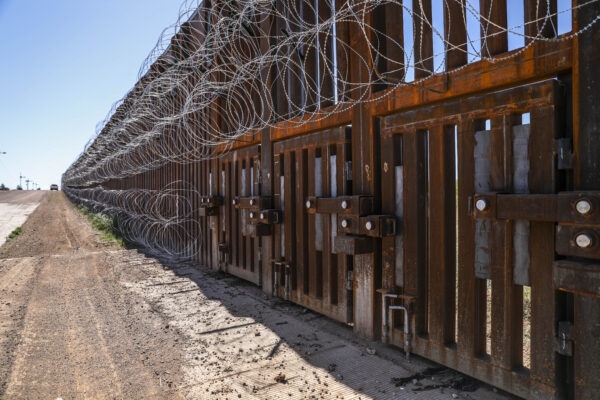 The flood gates sit within the U.S.-Mexico border fence west of Naco, Arizona, on May 8, 2019. The gates are left open during the rainy season of July 1 through Oct. 1 each year. (Charlotte Cuthbertson/The Epoch Times)

“Keep in mind that a comprehensive border wall system is not just a physical structure, but it also includes more roads for Border Patrol enforcement, and ever-evolving technology like cameras and sensors—equipment that is vital for confronting the unique and diverse threats we face, including pandemics,” Morgan said.

Last month, Democrats in Congress called on the White House to stop border wall construction, arguing that construction workers who are building near the border could become spreaders of the CCP (Chinese Communist Party) virus.

They also said that funds used to build the wall could be “invested in health care, small businesses and fighting the spread of COVID-19,” according to a letter obtained by Politico.

Morgan, however, said Thursday that the wall’s construction progress will not be interrupted, arguing that the wall will curb the spread of the virus.

“The border wall system is and will remain a top priority. It is an integral tool [that] improves CBP’s operational capacity with every mile of steel put into the ground to effectively impede and deny who and what is coming through our borders that may cause harm to our nation’s citizens, including infectious diseases like COVID-19,” Morgan said.

Border Patrol agents have also been forced to deal with “infectious disease threats in the past and it is undeniably a health security and national security matter,” adding that the border wall system has helped “stem the spread” of the virus.

His remarks come as the number of cases of COVID-19 in Mexico continues to rise, according to the country’s monitoring agency. So far, more than 40,000 cases and 4,200 deaths have been reported.