Another company has released Betsy Ross flag-era sneakers after Nike recalled its flag-themed kicks when former NFL quarterback Colin Kaepernick said the design was reminiscent of the slave era.

The company Out of Line released the “Boss Like Ross” sneaker Tuesday, just after Nike recalled a shoe with Betsy Ross’s design of the American flag on the heel. Kaepernick, who started a protest in 2016 where athletes took a knee during the national anthem to protest police brutality and racism, reportedly told Nike that the Betsy Ross flag was offensive and reminiscent of slavery. (RELATED: Dan Lipinski Stands Against Nike After It Pulls Patriotic Sneakers)

“She [Betsy] did it and thats my point to Nike,” Out of Line founder Carly Reed told the Daily Caller News Foundation. “Their [motto] is just do it, but Betsy did it. She did it all on her own. In a time where it wasn’t easy, as well.”

The “Boss Like Ross” shoes aren’t “intended to be a political statement,” according to Reed. Rather, she wants the sneakers to help change people’s perspective and see things in a more positive light.

“These shoes aren’t about knocking Nike or Kaepernick,” Reed told the DCNF. “It was a great idea by Nike, and I respect anyone who stands up for what they believe in. I believe in women. Women that are getting ‘Out of Line’ and paving their own path, just like Betsy Ross.”

“…They were made to change people’s perspective,” Reed continued. “A perspective that is built around hate and is now erasing a key figure in American history. You can be patriotic and support equality. That is the foundation of America.” 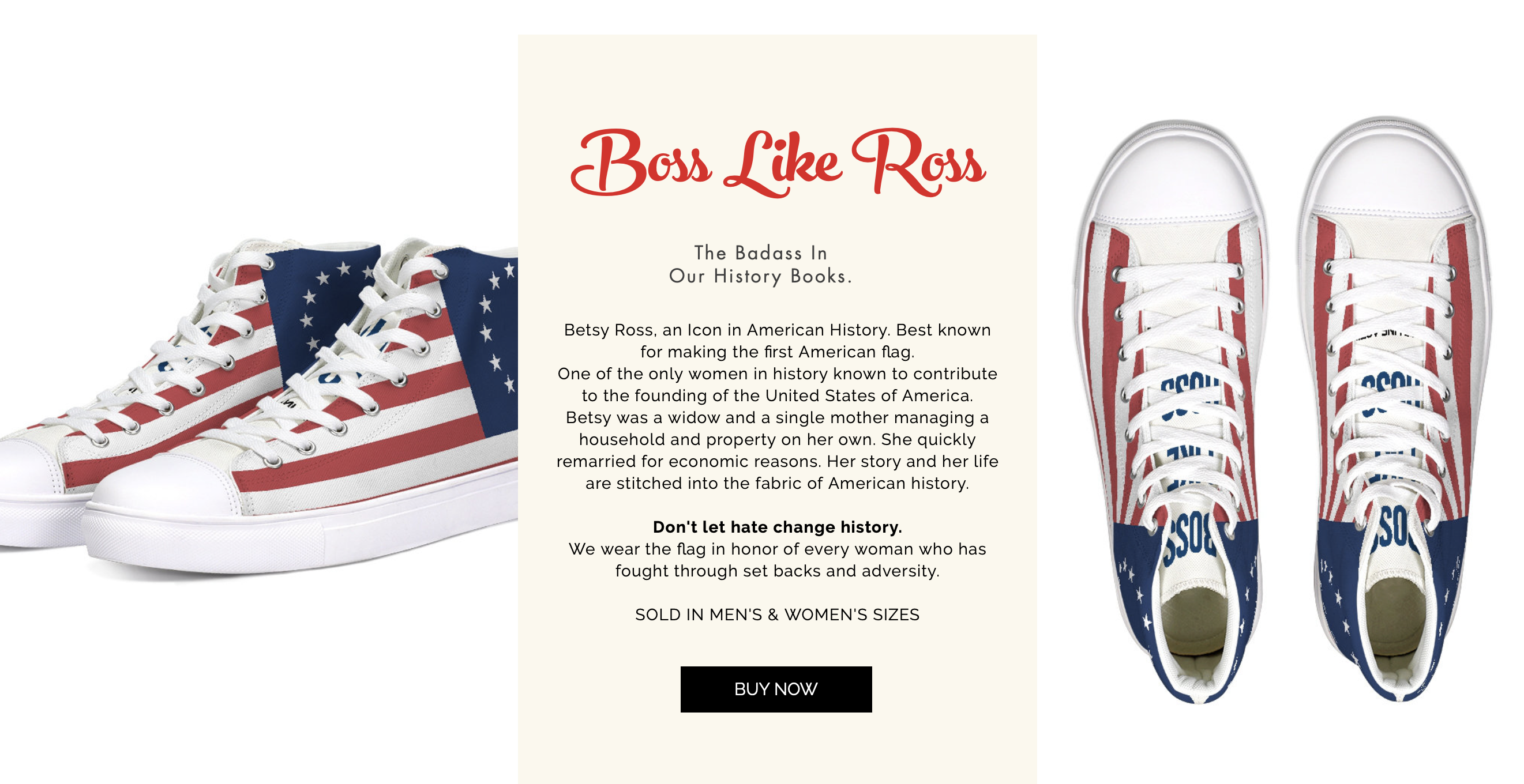 “Boss Like Ross” sneakers feature Betsy Ross’s original American flag design and are being sold by Out of Line. (Screenshot/Out of Line)

The “Boss Like Ross” shoe includes a description of why Ross is “The Badass In Our History Books.” Ross was a widow and single mother managing a household, and is an “Icon in American History,” according to Out of Line.

“Her story and her life are stitched into the fabric of American history,” the description reads. “Don’t let hate change history. We wear the flag in honor of every woman who has fought through set backs and adversity.”

Reed, 24, started Out of Line when she was 22-years-old after graduating as a student-athlete from the University of North Carolina. She hopes that the “Boss Like Ross” sneakers will put the focus back on Betsy Ross and show people that this flag can be viewed in a positive way.

“Colin Kapernick’s name is everywhere,” Reed told the DCNF. “As much as I respect him and everything, this isn’t really about him. You can take something and see it however you want, and I’m choosing to see this flag in a positive way.”

The flag, designed by Betsy Ross, has 13 stars in a circle with 13 red and white stripes to represent the original colonies.

“These shoes were important to me,” Reed said. “I’m looking at it from a different lens than Nike is and trying to put a positive spin on it. Why aren’t we taking this flag back and making it ours and making it a positive image? We can change the way people look at this flag.”