LOS ANGELES—The Los Angeles Unified School District is pushing hard for its Buddhist-based Mindfulness program as a way for students “to reduce stress and tension, and promote physical, emotional, and spiritual relaxation.”

An article called “Mindfulness for Educators: A Trauma-Informed approach to supporting ourselves and our students” posted by the LAUSD Student Health and Human Services division states that “scientists have discovered the benefits of mindfulness techniques can lower blood pressure, reduce chronic pain, alleviate gastrointestinal difficulties, and improve sleep.”

The article goes on to list 10 Breaths (taken from Ten Breaths to Happiness by Parallax Press, Berkeley, CA 2013) practice by Glen Schneider which “is a simple way to use conscious, rhythmic breathing to help us connect with ourselves and our life and live more fully” as we “encourage youth to do the 10 Breaths practice every day…guided by a supportive adult.”

The LAUSD website also has a post taken from The Atlantic (August, 2015) describing “When Mindfulness Meets the Classroom” quoting Jon Kabat-Zinn, the biologist who first coined the term ‘mindfulness’ in the ‘70s and also founded the Center for mindfulness at UMass Medical School.

However, this article states that “practicing Buddhists and others who believe strongly in the spiritual roots of mindfulness are concerned that the meditation techniques are being poorly adopted without a proper understanding of the principles behind them.”

It is these Buddhist principles that the American Center for Law and Justice is fighting from such curriculums as Inner Explorer (used by LAUSD), MindUp, Dialectic Behavior Therapy and Mindful Schools, the California-based nonprofit (founded in 2010) that has “spearheaded the nation’s mindfulness-in-education movement which complements ‘the social-and-emotional learning’ movement.

“‘Buddhist thoughts and beliefs’ permeate these programs despite how much Mindfulness-Based Stress Reduction (MBSR) has “attempted to hide the Buddhist practices by ‘secularizing’ them.”  The Atlantic article states that “at times all the roles blur—teachers, therapists, social workers.”

According to Christina Stierhoff, (ACLJ, March 27 posting), “Some Buddhists are troubled by the deception surrounding the origin of these programs because dishonesty is contrary to Buddhist ethics.  The Dalai Lama’s translator  Thupten Jinpa Langri, states that mindfulness is ‘the essence of Buddhism, therefore, it’s a Buddhist practice’ that cannot be separated from its religion.

“For months, the ACLHJ has worked to defend the rights of students in pubic schools across the country who are being subjected to classroom-led mindfulness and meditation sessions—a core religious practice of Buddhism and other eastern religions,” states a Sept. 19 posting by Abigail Southerland (ACLJ website).

“As the mindfulness revolution continues to sweep our nation, students are not the only ones whose rights are being infringed.  Teachers and other public employees, alike, are being forced to attend mindfulness and meditation training and/or are under significant pressure to participate in such practices despite their state religious objections.”

Many LAUSD schools are requiring Mindfulness as a daily activity and extend the amount of time (to 10 minutes) given to the practice during state testing in Spring.

“We (ACLJ) have received inquiries from public employees who want to know whether it is within their rights to opt out of, or refuse to participate in mindfulness and meditation training and practices.  Forcing a teacher to participate and be trained in the mindfulness curriculums, when it is against his or her religious beliefs, violates federal law.

“Proponents of mindfulness, who have everything to gain from pushing their programs into the public sector, continue to maintain that mindfulness is purely secular.  Such assertions are made despite many proponents’ admission that clearly Buddhist principles are embedded in the mindfulness programs (such as the observance of all thoughts and feelings without judgment; the belief that life is cyclical and humans are inherently good; and the idea that we are magnificent and all happiness can be achieved through self-discovery and self-reliance.

“Indeed, mindfulness proponents have admitted that mindfulness is a ‘Buddhist Trojan Horse’ and ‘Stealth Buddhism.”  Mindfulness has been dubbed as the ‘new American religion.’”

According to the American Center for Law and Justice the law prohibiting religious discrimination in the workplace has been codified under Title VII of the Civil Rights Act of 1964.  In order for an employee to be protected under Title VII, they must show that:

According to Christina Stierhoff (ACLJ post on Nov. 1), “some of our clients have been told that school mindfulness programs can mesh with Christianity, or any religion, but this is simply false.  Christianity and Buddhism have opposing worldviews which influence how they both practice meditation.”

“Whereas Zen meditation promotes the idea ‘that we are connected to the cosmos in a holistic way and that meditation actuates that connectedness,’  Christians believe that men and women are image bearers of God and individuals with souls that can be redeemed through Jesus.

“Buddhists also believe that people need to escape suffering via mindfulness and that each person needs to find their own path for achieving enlightenment.  In contrast, Christians believe that suffering brings us closer to God and that Christ is the only way to receive salvation.

“In sharp contrast to Buddhist mindfulness, the purpose of Christian meditation is to understand what the Bible says and turn away form evil by filling the mind with God’s truth.  Furthermore, Christian meditation focuses on growing your relationship with God and others, as well as growing in holiness and gaining the peace of Christ.

“Christians approach meditation by focusing on God’s laws, God Himself, or heavenly things in general, rather than focusing on breathing and our own magnificence like Buddhists.  Instead of attempting to alter the mind or reach a different state of consciousness, Christians engage in singing and prayer and use observations of the natural world to ponder spiritual realities.

Editor’s Note:  An American Center for Law and Justice petition to stop forcing Buddhist Meditation on Kids in School has 85,610 signature.  To sign go to:

LAUSD Student Health and Human Services director Joel Cisneros can be called at (213) 241-3841. 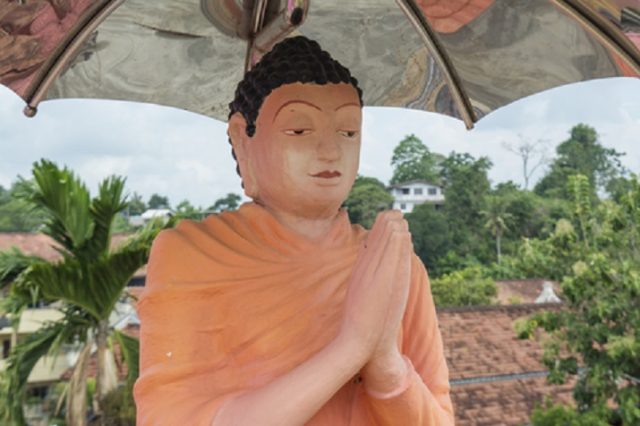 hey great way to be mindfull about all of these things

So they can push for Buddhism yet push Christian beliefs out??