Busted for Illegal cultivation of Pot

Detectives from the Ventura County Sheriff’s Office Narcotics Street Team received information Robert Hill was involved in the illegal cultivation of marijuana. Detectives conducted an investigation and obtained a search warrant for Hill’s person, his vehicles and two residences located in Ventura County.

On May 28, 2021, Detectives contacted Hill and detained him pursuant to the search warrant. A search of Hill’s residences was conducted in the 5900 Block of Chestnut Place in the City of Camarillo and the 100 Block of North Fir Street in the City of Ventura. During the search, Detectives located two separate illegal marijuana cultivation operations which Hill was responsible for. In total, Detectives seized 80 marijuana plants, approximately 26 pounds of dried marijuana, steroids, 52 suboxone strips, ecstasy pills, psylocibin mushrooms, several hundred rounds of ammunition, two handguns, a short-barreled assault rifle and several thousand dollars in suspected drug proceeds.

Based on the investigation, Hill was arrested for various narcotics and weapons related violations. Hill was booked into the Ventura County Pre-Trial Detention Facility without incident.

Unregulated and illegal marijuana grow operations are dangerous to the end users and the environment. Often, banned pesticides and fertilizers are used to maximize plant growth and THC content. These pesticides and fertilizers are poisonous and can lead to health problems for humans or wild animals and contaminate the ground. The Sheriff’s Office routinely works with other local and state government agencies during these investigations to ensure that the property is cleaned up and hazards are mitigated.

Residents should not enter grow sites due to a variety of risks including possibly armed grower site operators. Information can be reported to Ventura County Crime Stoppers or the Sheriff’s Narcotics Office at 805-383-8700. 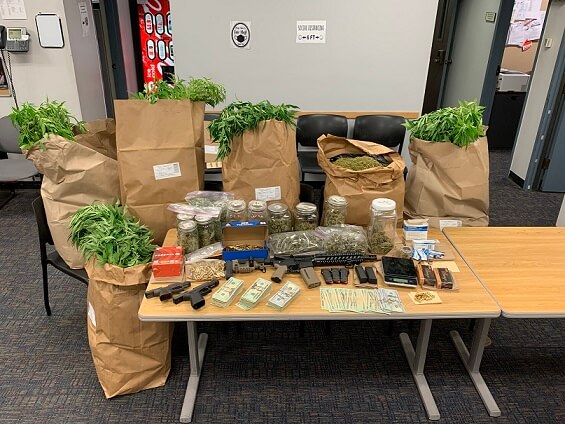