California: 5% growth in total housing units over past decade

The state of the U.S. housing market has been one of the dominant economic stories since the start of the COVID-19 pandemic. The market saw unprecedented price growth over the last two years, and rapidly rising housing costs have been one of the major contributing factors in the historic run of inflation experienced in the U.S. economy over the last year. Now, with interest rates rising and low- and middle-income households increasingly priced out of the market, a slowdown in the housing market could portend a recession later this year or in 2023.

Record low interest rates, strong savings rates and wage growth, and shifting consumer preferences for housing were among the conditions that spurred high demand for residential real estate over the last two years. But the increase in demand only exacerbated larger challenges with housing supply that predated the pandemic. According to a 2021 report from federal mortgage backer Freddie Mac, the U.S. is short nearly 4 million housing units based on the country’s population and housing needs. 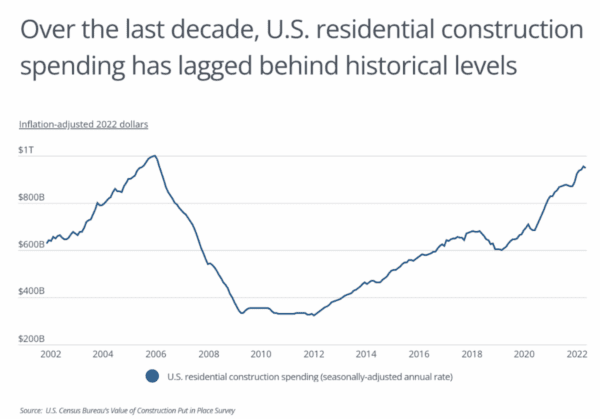 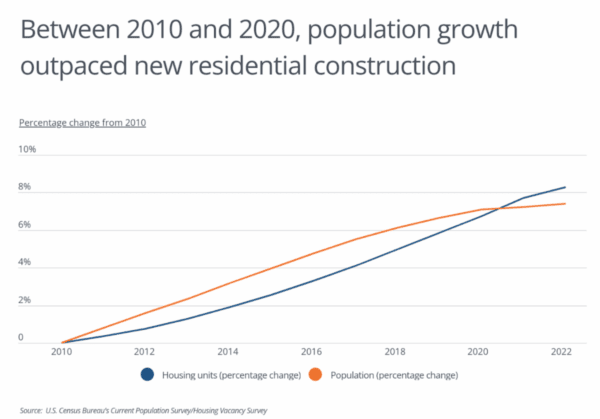 And during this period of slow growth in housing, the U.S. continued to grow in population. From 2010 to 2020, the U.S. added residents at a faster rate than it added housing units, leaving a larger number of people to compete for a limited amount of housing stock. But in 2021 and 2022, the percent change in housing units since 2010 has topped the growth in population, which could bring some relief to the market’s recent supply challenges in the near future. 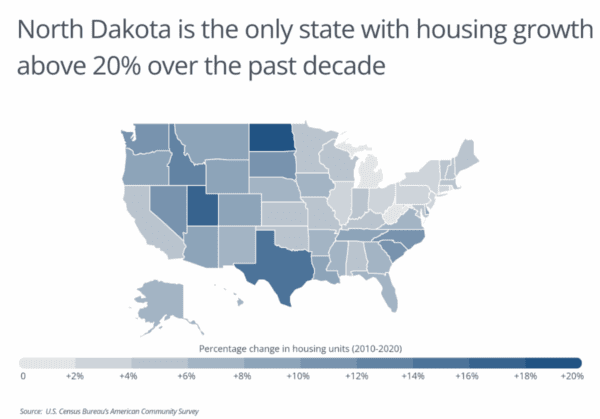 But despite recent encouraging signs in housing investment, much of the country must catch up to meet the overall need for housing. From 2010 to 2020, 20 states added population at a faster rate than they added housing, a fact that was true even among most of the states that added housing the fastest. Of the top 10 states for housing growth over the last decade, only North Dakota, South Dakota, and Delaware added housing faster than they added residents.At the metro level, a number of fast-growing cities are rapidly adding housing stock to meet growing demand. Booming metros like Nashville, Austin, and Charlotte are among the U.S.’s top cities for housing growth over the last decade as they contend with an influx of new residents.

The analysis found that California experienced a 4.9% increase in new housing units during the study period, compared to the national increase of 6.5%. Here is a summary of the data for California:

For more information, a detailed methodology, and complete results, you can find the original report on Stessa’s website:https://www.stessa.com/blog/cities-largest-growth-in-housing