Folks in a small California town are not loving the light display on the giant coastal Redwood Christmas Tree in the center of town, with some saying it looks like a “condom.”

It all started in Tulare, a town in the Central Valley, where residents took to their social media accounts calling the decorations, among other things, “janky,” “tacky,” and “embarrassing,” according to the Visalia Times Delta in a piece published Thursday. Some even said the display resembled a “whale net” with other’s saying it looked more like a “condom” than a Christmas tree.

The Christmas tree display is definitely getting lots of attention, but probably not the kind the city wants. Several pictures have surfaced on social media. Check them out! (RELATED: Celebrate Anna Kendrick’s Birthday With These Unforgettable Looks) 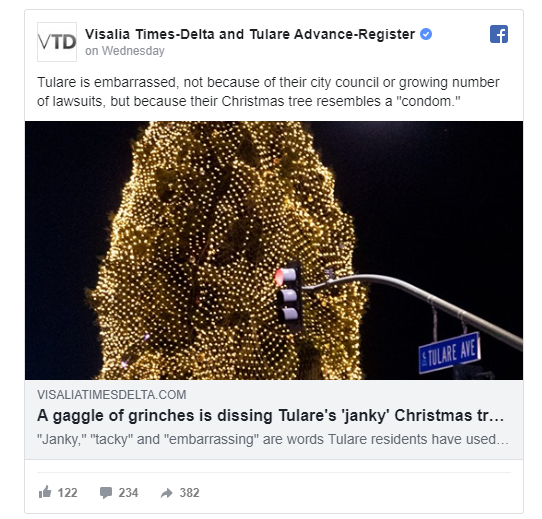 This is Tulare Christmas tree , when I live there it was nothing like this..what happened? Everyone is talking about it😔. pic.twitter.com/ZNA173I0qO

Ayoooo LMFAO. What’s going on in Tulare? Who went to the Christmas tree lighting? Who let this happen? pic.twitter.com/fknwNaxMZY

Others have come to the defense of the tree. (RELATED: Longtime Mall Santa ‘Replaced’ After Wearing Hat Supporting Trump)

“Does this tree look perfect? No it does not,” Kerry Nimitz wrote on Facebook responding to the backlash. “While I did not work on the tree myself, I thank the guys who gave up their time and were away from their families to try and do something nice for Tulare.”

“We could’ve done better,” he added, while explaining that the lights were chosen as a cost-effective solution after residents complaints that the tree the year before “didn’t have enough lights.”

If you can’t do it right don’t do it at all!

Didn’t a famous lawyer say, “I don’t care what you say about me, just spell my name right”?

While Tulare may not be thrilled with the kind of P.R. they are getting, I’ll bet a lot of folks who never heard of Tulare have looked it up on Wikipedia or some other on-line reference.