California Has 2nd Most EV Charging Stations Per Vehicle

Encouraging the adoption of electric vehicles is a high priority for many policymakers and environmentalists concerned with how to limit carbon emissions. President Joe Biden in August signed an executive order setting ambitious new targets for the sale of hybrid and electric vehicles, and Biden’s American Jobs Plan proposal included a $174 billion investment in electric vehicle production and adoption along with charging infrastructure.

Consumer demand for EVs has already been trending upward as the technology behind electric vehicles has improved. The total stock of electric vehicles worldwide hit 10 million in 2020, a 43% increase over the prior year. And while much of the auto market took a hit during the pandemic, demand for EV was more resilient than for other vehicle types.

Most of this growth in the industry has happened very recently. While electric vehicles were a competitor to the internal combustion engine when automobiles were first manufactured in the late 1800s and early 1900s, they fell out of vogue and were uncommon on the market until the last few decades. The 1990s saw the introduction of some new hybrid and plug-in electric vehicle models from major manufacturers like Toyota and GM. After Tesla emerged in the mid-2000s, offering longer-range, luxury models that proved popular with drivers, more major manufacturers began to offer new EV models. Over just a decade, the number of EV models on the market rose from only one in 2009 to 72 in 2019, according to data from the U.S. Department of Energy. 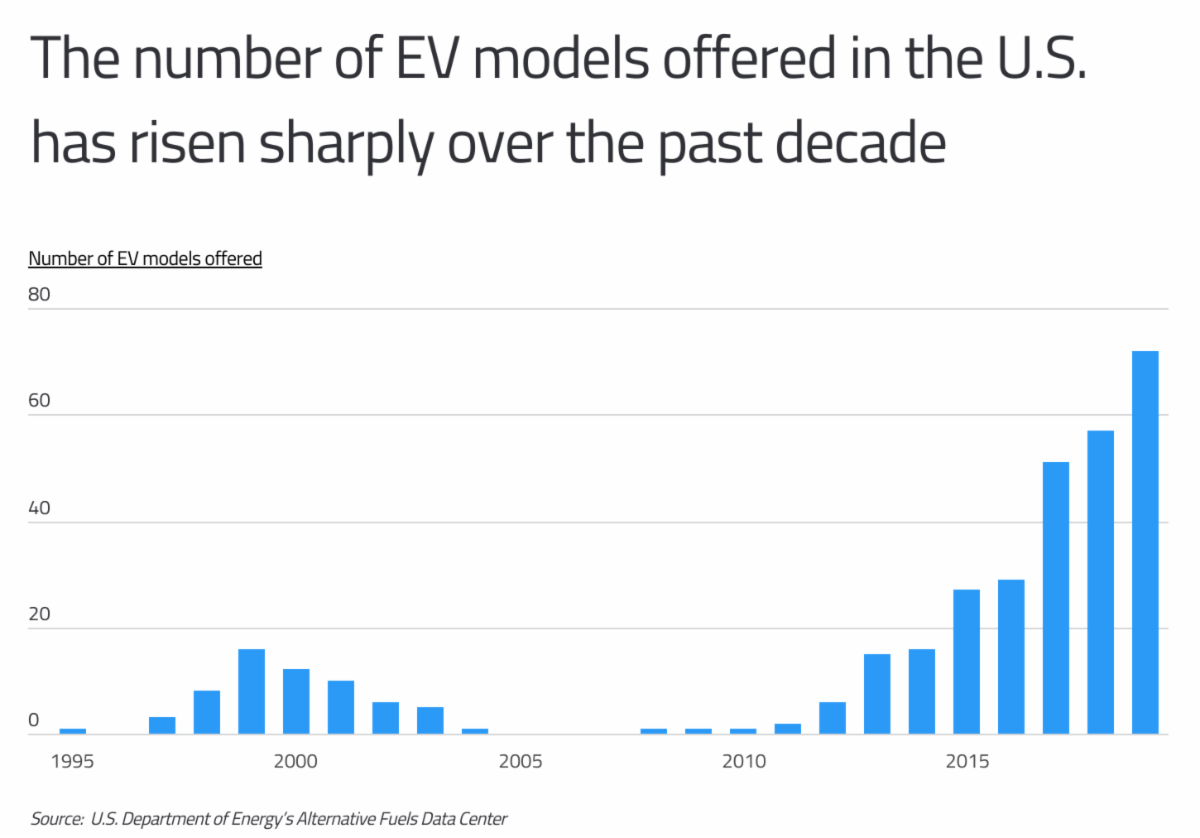 Improvements in battery life and charging technology have been a major force in speeding the growth of electric vehicles. As recently as a few years ago, some of the top all-electric vehicle models had a range of less than 100 miles, and the battery charging infrastructure in the U.S. was limited. These factors made electric vehicles less viable for longer trips and limited their uptake with consumers. In more recent years, however, research and investment from the U.S. Department of Energy, startups like Tesla, and traditional auto giants like General Motors have given batteries a longer range and made them easier to charge with more charging stations and improved charging times.

Charging infrastructure remains a barrier in many locations, however. Chargers break down into three categories: Level 1 chargers, which use a 120-volt household outlet and add between two and five miles of range per hour; Level 2 chargers, which replenish at an average rate of about 10 to 20 miles of range per hour; and Level 3 chargers (also known as DC Fast Charging), which use direct current and higher voltage to recharge EVs at a rate of up to four miles per minute (240 miles per hour). Currently, Level 2 chargers represent the bulk of publicly available charging stations, with more than 80% of the total, while Level 3 chargers represent only around 18% of the public EV chargers. Expanding the supply of Level 3 chargers nationwide would make charging more convenient for more consumers. 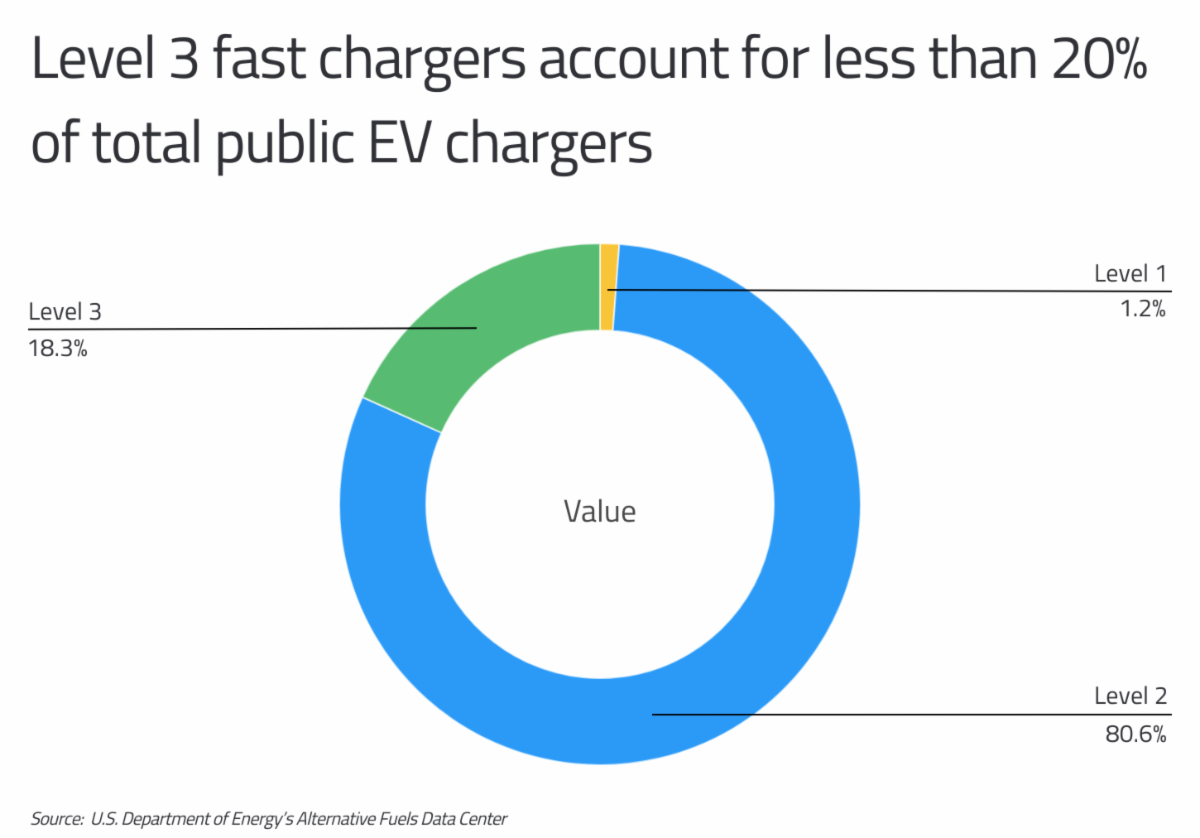 Because of the uneven distribution of charging technology, some areas are more convenient than others to have an electric vehicle, and California tops the list. In addition to leading the nation in electric vehicle sales and market share, California also has the nation’s strongest charging infrastructure, accounting for roughly 30% of all U.S. electric vehicle charging stations. California’s dominance in EVs is unsurprising given that market leader Tesla is based in the state and the state government has supported EV adoption, including a recent executive order that mandates all new cars and passenger trucks sold in California be zero-emission vehicles by 2035. 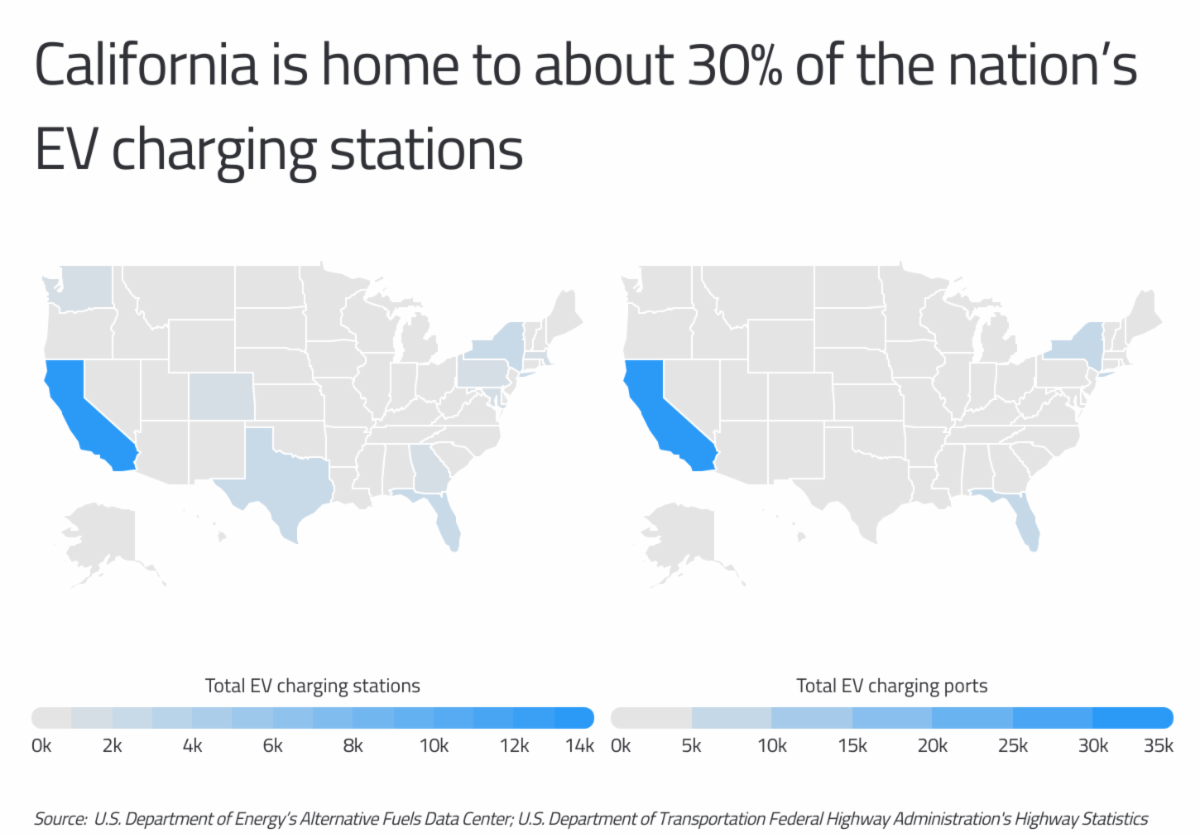 But on a per-vehicle basis, one state tops California in the number of EV charging stations: Vermont. The Green Mountain State is one of the smallest states in population and area, so its more than 300 electric charging stations are more highly concentrated than in many other larger and more populous states.

The data used in this analysis is from the U.S. Department of Energy and the U.S. Department of Transportation. To determine the states with the most electric vehicle charging stations, researchers at Commodity.com calculated the total electric vehicle charging stations per 100k registered vehicles for each state. In the event of a tie, the state with more charging ports per 100k registered vehicles was ranked higher.

For more information, a detailed methodology, and complete results, you can find the original report on Commodity.com’s website: https://commodity.com/blog/ev-charging-stations/