For many Americans, the federal government’s packages to stimulate the economy during the COVID-19 pandemic are notable for the direct relief they have offered to individual households, like stimulus checks and expanded unemployment benefits. But these bills have also brought unprecedented levels of federal investment into state and local governments.

One of the major features of the $1.9 trillion American Rescue Plan, passed in March of this year, was a $350 billion fund for states, territories, cities, counties, and tribal governments across the nation to supplement their own revenues. The package also included large pots of funding for areas like health, education, infrastructure, and others that are funded through state and local dollars. The American Rescue Plan followed the $2.2 trillion CARES Act from March 2020 and other pandemic relief packages that offered aid for similar purposes.

The aid provided to state and local governments in the COVID-19 stimulus bills was intended to ward off cutbacks to public services at a time when many observers feared that tax revenues would collapse as a result of the pandemic’s economic fallout. But while COVID-19 created additional urgency for federal support to states, the federal government has long played an important role in supporting state budgets. 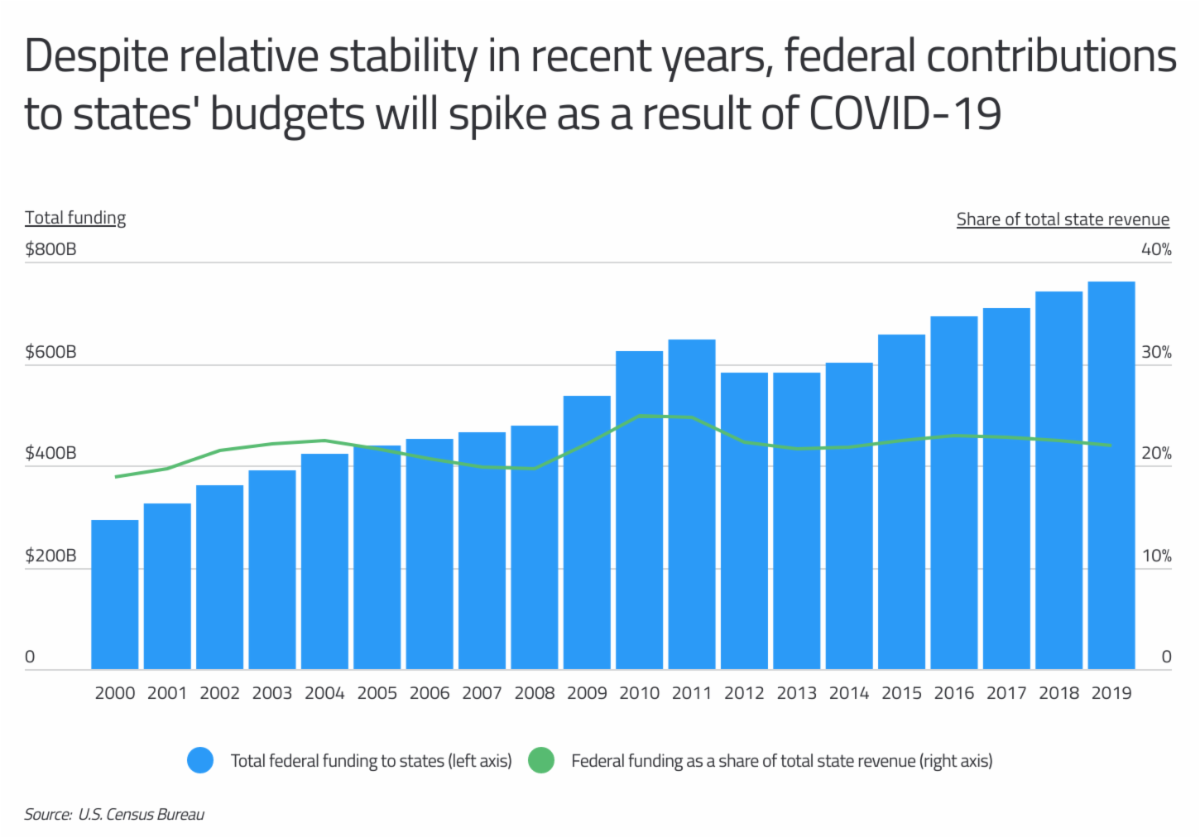 For most of the last two decades, federal funding has represented more than 20% of all state and local government revenue in the U.S., according to data from the U.S. Census Bureau. In nominal dollars, federal investment in the states is more than 2.5 times what it was at the start of the millennium, rising from $292 billion in 2000 to $762 billion in 2019. And as in the Great Recession, when federal investment increased dramatically both in dollars and as a share of state revenues due to the $787 billion stimulus plan under Obama, these same figures are likely to spike again when the pandemic stimulus packages are taken into account for 2020 and 2021.

Open-ended grants to states like the $350 billion fund in the American Rescue Plan are rare, and instead, federal dollars flowing to the states typically fund particular programs, like Medicaid or income assistance, or to grants that can only fund certain priorities, like transportation, education, or economic development. These dollars are usually meant to supplement state funds, particularly in states with fewer economic resources (and as a result, lower tax revenues) or larger groups of people who qualify for public assistance programs. 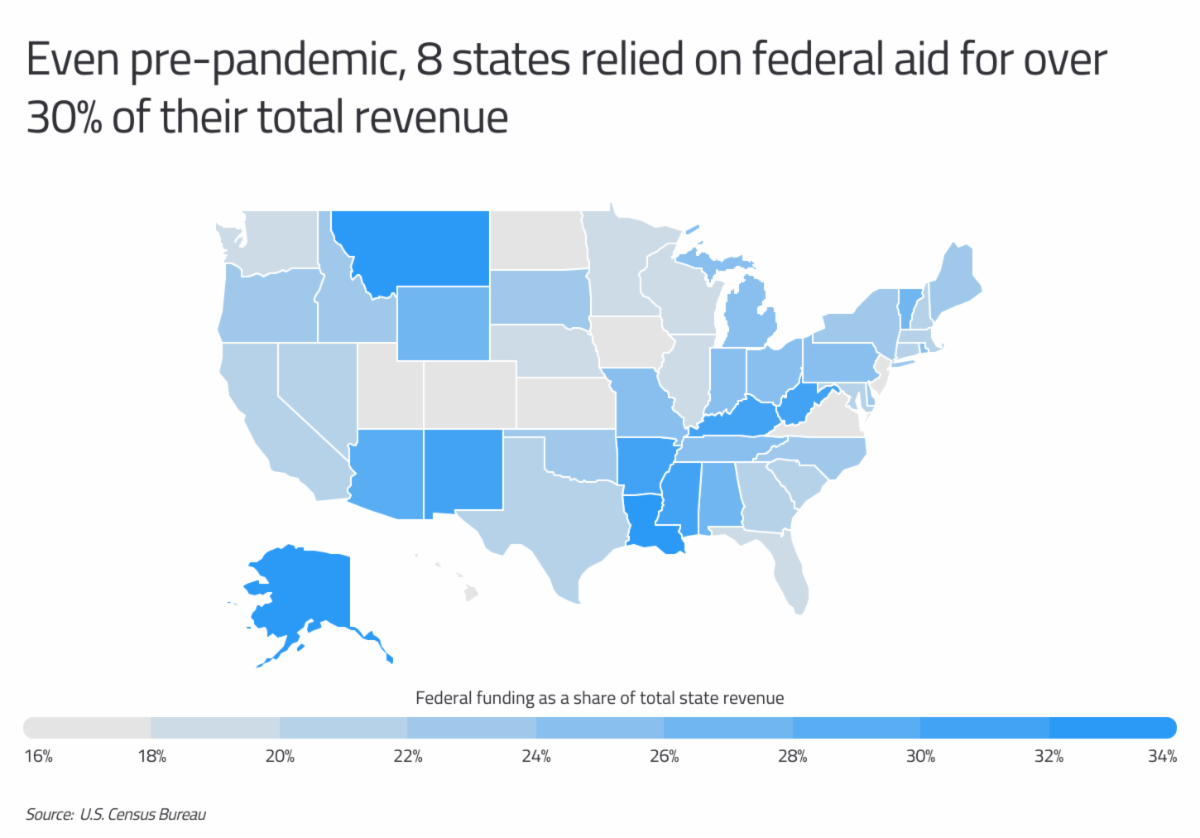 Because federal funding is structured in this way, some states are more heavily dependent on federal dollars than others. Pre-pandemic, eight states took in more than 30% of their revenues from federal dollars. Southern states like Louisiana, Kentucky, and Mississippi, which have some of the largest numbers of people living in poverty and qualifying for various federal aid programs, are among the most dependent on federal funding. Some rural states with small populations, like Montana and Alaska, have a limited tax base that makes federal support more important to their budgets. And along those lines, another important factor in reliance on federal aid is a state’s political leanings: more conservative states tend to have lower taxes and levels of public spending, which means they may fund a greater proportion of their budgets with federal money.

To determine the states most dependent on federal aid, researchers at Commodity.com calculated federal funding as a share of total state and local government revenue using the most recent data available from the U.S. Census Bureau’s 2019 Annual Survey of State and Local Government Finances. In the event of a tie, the state with more federal funding per person was ranked higher.

The analysis found that in California, 21.2% of total annual state revenue comes from federal funding. Out of all states, California is 20th least dependent on federal aid. Here is a summary of the data for California:

For more information, a detailed methodology, and complete results, you can find the original report on Commodity.com’s website: https://commodity.com/blog/federal-aid-states/