The COVID-19 pandemic has placed many stresses on low- and middle-income families, and one of the most noteworthy is housing affordability.

Supply chain breakdowns have slowed new housing construction, the market for homebuyers is one of the most competitive in memory, and rents nationwide have increased by 13.8% since January 2021. Even as these trends continue to worsen, federal COVID-19 emergency relief measures have expired, including income supports like expanded unemployment benefits and housing policies like mortgage forbearance and the federal eviction moratorium.

While the pandemic has exacerbated housing issues, the affordable housing crisis is not a new problem. According to the National Low Income Housing Coalition, the U.S. has a shortage of nearly 7 million affordable homes, while 70% of low-income families are severely cost-burdened by housing, which means that they spend more than half of their income on rent.

Housing and community development is a relatively small spending category for most state and local budgets, but spending in this area has consistently grown at a faster rate than spending overall. Inflation-adjusted expenditures for housing and community development are up nearly 300% since 1977, even after accounting for an uptick in spending during the early 2000s and an eventual post-Great Recession reduction beginning in 2011. Total spending has only increased by 190% during the same period.

One factor that is likely to contribute to continued growth in the next few years is federal COVID-19 relief dollars targeted toward housing and community development. The Coronavirus Aid, Relief, and Economic Security (CARES) Act from March 2020, the Coronavirus Response and Relief Supplemental Appropriations Act from December 2020, and the American Rescue Plan Act from March 2021 all distributed funds to states and localities to help ensure people would be able to maintain access to housing during the pandemic and ensuing recession. This means that future data will show higher expenditures for housing and community development in 2020 and 2021. And with aggressive proposals to support low and middle-income families being a key part of the Biden Administration’s agenda, states could continue to see increased federal investment in this area into the future. 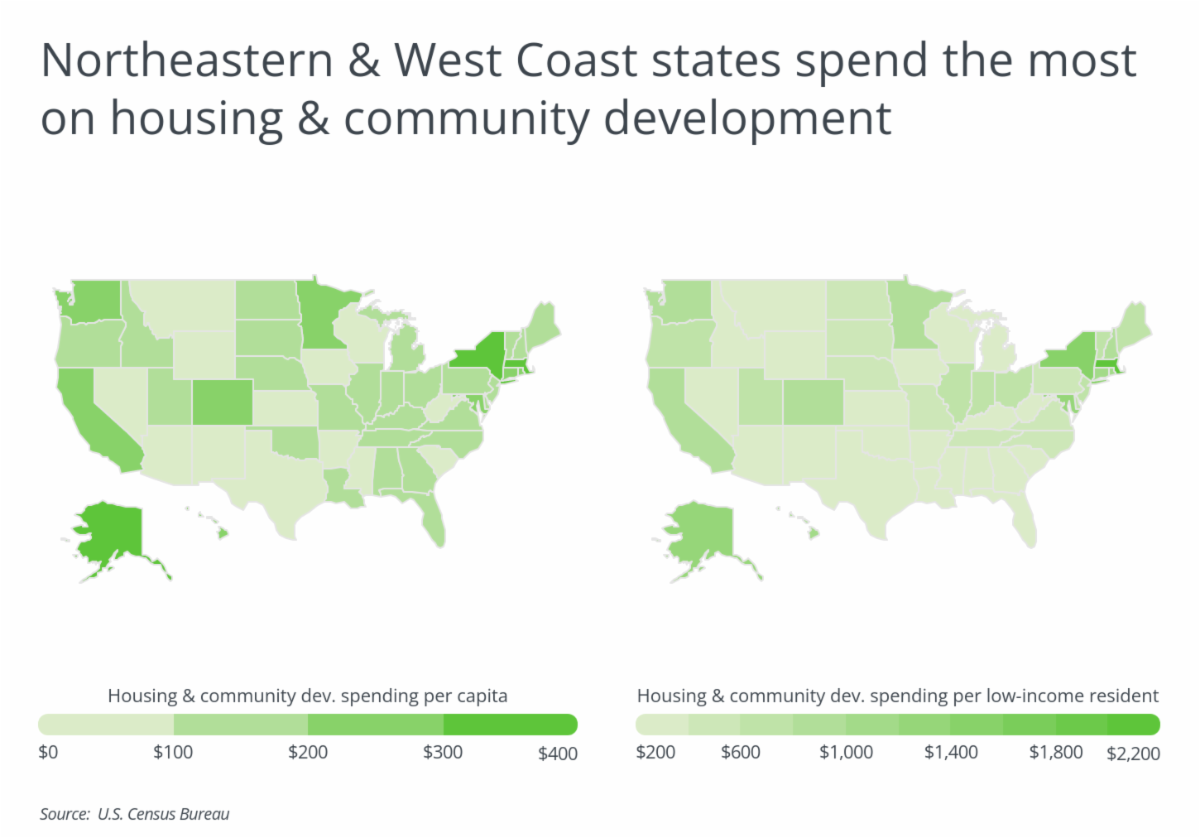 For more information, a detailed methodology, and complete results, you can find the original report on HireAHelper’s website: https://www.hireahelper.com/lifestyle/states-spending-the-most-on-affordable-housing/