California Is The 2nd Worst-Paying State For Agricultural Workers

Agriculture has been and remains one of the most important industries for the U.S. economy. In addition to directly providing food for the population in the form of produce and livestock, the broader agricultural sector—which includes farming, fishing, and forestry—provides raw materials that form the foundation of other industries like food service, construction, and textile manufacturing. Further, the U.S. is the world’s leading exporter of food and other agricultural products, which contributes to its global economic and political influence.

While agriculture’s role in the U.S. economy remains significant, the industry’s future in the U.S. faces many challenges. Global climate change has produced warmer temperatures and more frequent severe weather events like droughts and fires, threatening an increasing number of crops, livestock, and forests. Agricultural exports have been negatively impacted by recent trade disputes with other countries, and imports on agricultural equipment have become more expensive. And on top of these more recent challenges, agriculture has been undergoing a long-term decline as a share of the economy: farms alone represented more than 3% of GDP in the early 1960s but only account for less than 1% of U.S. GDP today.

Another indicator of agriculture’s shifting role in the economy is its employment numbers. Since the end of World War II, the total number of workers in agriculture and related industries has been on a steady decline over time. In the late 1950s, the U.S. economy had more than 8 million workers supporting agriculture. That figure had been cut in half within two decades, and today, agricultural-related employment hovers around 2.3 million, according to data from the Bureau of Labor Statistics. 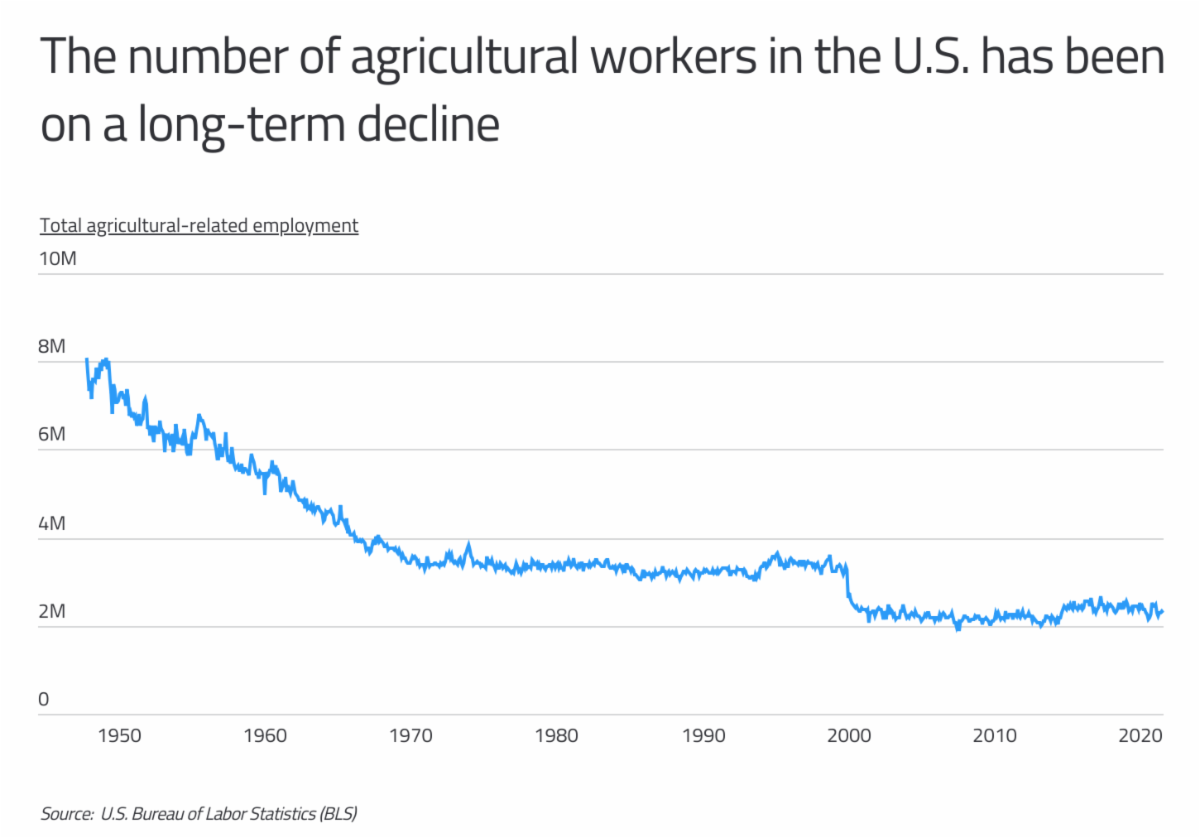 One of the major reasons for this decline is agricultural and mechanical innovations that have reduced the need for manual labor. Simultaneously, other sectors of the economy have grown, offering new and more appealing opportunities in different fields and professions. Working conditions for agricultural workers are also some of the most difficult and hazardous of any profession, and these workers face some of the lowest wages of any profession in the U.S. According to BLS data, the median pay for farming, fishing, and forestry occupations is less than $30,000 per year, or about 30% below the median of $41,950 across all occupations.

However, certain states offer far better pay than others, especially after adjusting for cost-of-living differences. Despite above-average living costs, Alaska stands out as the best-paying state for these workers, where the typical agricultural worker earns an adjusted wage of more than $43,000 annually. Outside of Alaska, states in the Central U.S. offer the most competitive wages. At the other end of the spectrum, the list of lowest-paying states includes Florida, California, and New Jersey, where workers earn an adjusted wage of approximately $25,000 or less. 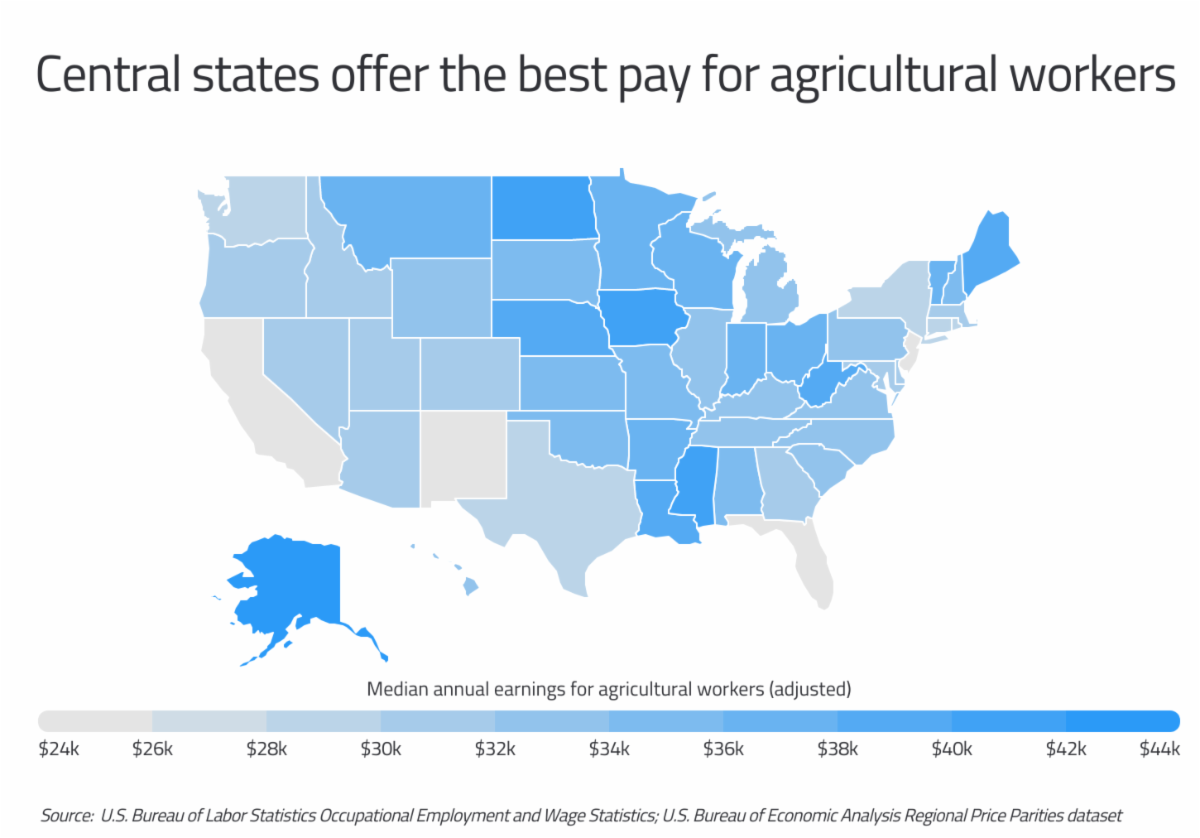 At the metro level, the Central U.S. is also well-represented on the list of best-paying U.S. locations for agricultural workers. Among large metropolitan areas, these include Indianapolis, Oklahoma City, Columbus, and St. Louis.

To find the best-paying locations for agricultural workers, researchers at Commodity.com analyzed data from the U.S. Bureau of Labor Statistics and the U.S. Bureau of Economic Analysis. Researchers calculated the median annual earnings for farming, fishing, and forestry occupations, which were adjusted for cost-of-living differences.

The analysis found that in California, agricultural workers—which in this report include farming, fishing, and forestry occupations—earn a median, cost-of-living-adjusted $25,026 per year, below the nationwide median of $29,670. Out of all U.S. states, California is the 2nd worst-paying for agricultural workers. Here is a summary of the data for California:

For more information, a detailed methodology, and complete results, you can find the original report on Commodity.com’s website: https://commodity.com/blog/agricultural-wages/