A patient in California died from the new coronavirus, health officials said on Wednesday, marking the first death from the virus in the United States outside the state of Washington.

The patient was described as an elderly adult with underlying health conditions. The patient tested positive on Tuesday. Officials believe the patient was exposed to the virus while traveling from Feb. 11 to Feb. 21 on a Princess Cruise Lines ship that left from San Francisco to Mexico.

Before dying, the patient was isolated at Kaiser Permanente Roseville in Placer County in Northern California.

“We extend our deepest condolences to the loved ones of this patient. While we have expected more cases, this death is an unfortunate milestone in our efforts to fight this disease, and one that we never wanted to see,” Placer County Health Officer Dr. Aimee Sisson said in a statement.

“While most cases of COVID-19 exhibit mild or moderate symptoms, this tragic death underscores the urgent need for us to take extra steps to protect residents who are particularly vulnerable to developing more serious illness, including elderly persons and those with underlying health conditions.”

The patient may have exposed 10 health care workers at Kaiser Permanente as well as five emergency responders, the county health department said. The 15 people are now being quarantined and monitored.

ther passengers on the cruise ship, the Grand Princess, may have been exposed and health officials are working with the Centers for Disease Control and Prevention (CDC) to identify and contact them.

According to Secretary of Health and Human Services Alex Azar, only a small percentage of patients require hospitalization, with a percentage of those cases requiring intensive care.

There were 80 confirmed cases of the coronavirus in the United States as of Wednesday morning, according to the CDC. Those cases don’t include the 49 patients who were either evacuated from the Diamond Princess cruise ship in Japan or Wuhan, China, the epicenter of the new virus.

The death toll from the virus rose to 11 with the death of the California patient. Washington state announced its 10th death earlier Wednesday. A number of cases and deaths there have been linked to a nursing home in Kirkland, a suburb just outside Seattle.

Princess Cruise Lines told passengers late March 3 that the CDC, a federal health agency, notified the company that they were probing “a small cluster” of cases of COVID-19, the disease the virus causes, connected to the previous Grand Princess voyage that sailed from San Francisco to Mexico before returning to the California city.

“For those guests who sailed with us on our previous voyage and may have been exposed, in an abundance of caution, the CDC requires you to remain in your stateroom until you have been contacted and cleared by our medical staff,” said Dr. Grant Tarling, the chief medical officer on board, in a letter to passengers and crew members.

A similar notification was emailed to people who sailed on the same voyage the patient who died was on.

The CDC is actively collecting information on the situation and Princess Cruise Lines said it shared essential travel and health data with the agency to help with the process.

The cruise company canceled a scheduled call to Ensenada, Baja California, Mexico, on March 5. The Grand Princess was sailing directly to San Francisco and was scheduled to dock on March 5. The CDC and the company were discussing what actions were needed upon arrival. 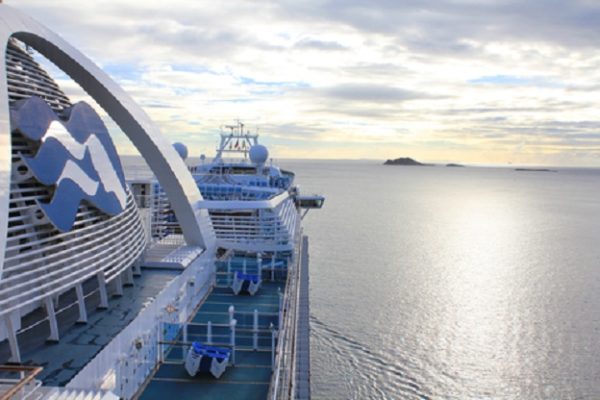 Because this person recently visited mexico, where health care is poor, is it unreasonable to suspect every person crossing our southern border as a potential source of COVID-19?

Another reason for THE WALL.