In the ongoing efforts to combat global climate change, one of the most promising trends has been a growing shift away from carbon-emitting vehicles. Transportation produces 29% of greenhouse gas emissions in the U.S., according to the EPA, but hybrid and electric vehicles are growing in popularity and potentially poised to reduce that figure.

Part of this shift has come with encouragement from policymakers. Recognizing the role that fuel emissions play in contributing to the greenhouse gas effect and climate change, policymakers at all levels have been encouraging a transition toward lower- or zero-emission vehicles. Hybrid and electric vehicle owners are frequently eligible for government incentives like tax credits. States like California are planning to phase out new carbon-emitting vehicles from the market altogether by 2035. More recently, the Biden Administration and Congress have been making efforts to expand the national network of electric vehicle charging stations among other climate-related infrastructure projects.

Simultaneously, the market for hybrid and electric cars has never been larger. In October, electric vehicle market leader Tesla became one of only a handful of companies ever to reach a $1 trillion market capitalization, following a surge in sales and the announcement of a $4 billion partnership with Hertz to provide 100,000 rental vehicles. Meanwhile, entrenched auto industry manufacturers like GM, Toyota, BMW, and many others are racing to catch up to Tesla, offering an increasingly large variety of high-performing vehicles that have greater fuel economy and lower or no emissions.

And over the last few months, some consumers have been looking to the electric vehicle market for another reason: the rising price of gasoline. 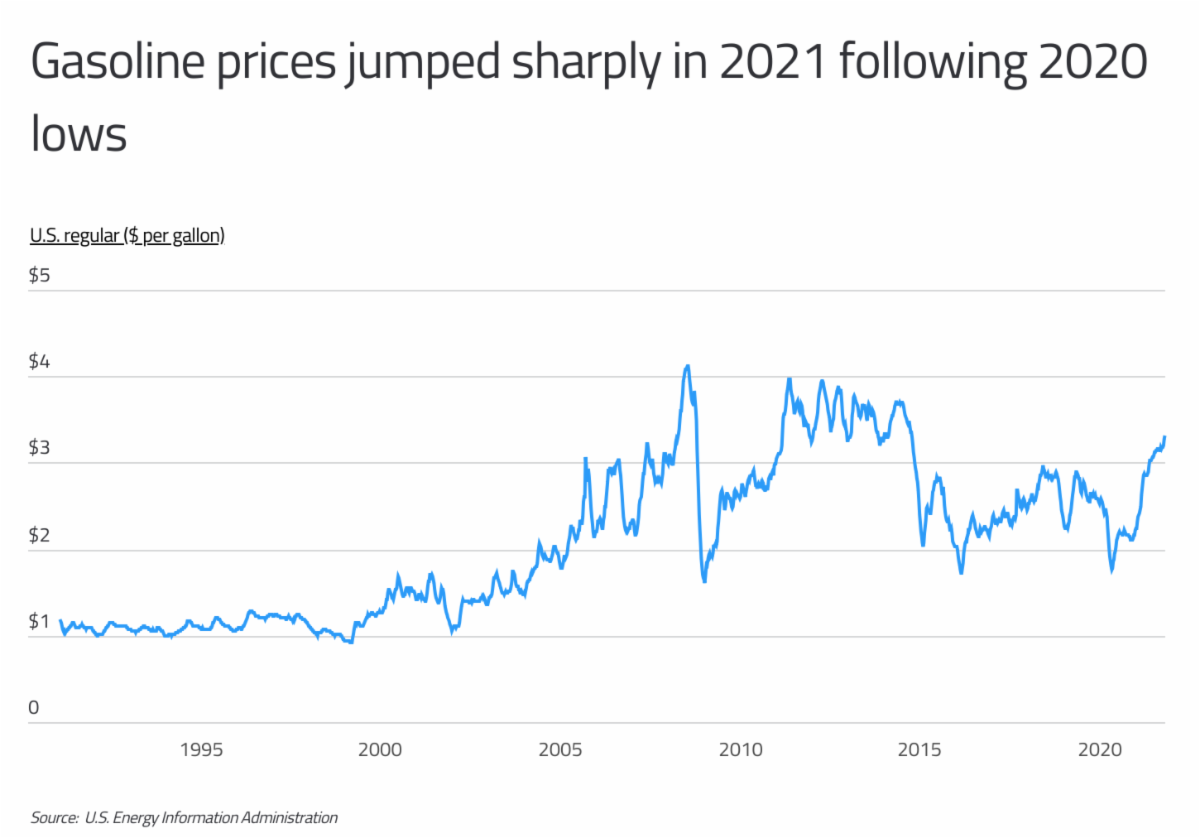 Gasoline prices have been fairly volatile over the last two decades, and the trajectory of gas prices during the COVID-19 pandemic provides one example. At the beginning of 2020, the average cost of a gallon of gas was $2.58. By the end of April, after the pandemic had taken hold and with lockdown orders still in effect in many jurisdictions, gasoline dipped to $1.77 per gallon. After staying under $2.25 for the rest of 2020, gas prices have dramatically increased this year, rising to $3.32 per gallon as of October 2021.

Even with elevated gas prices, however, consumption is likely to remain high until more hybrids and electric vehicles are on the road. Studies have found that demand for gas is mostly inelastic, meaning that people tend to purchase the same amount of gas regardless of the price. However, there does appear to be some correlation between the costs of gasoline in a state and the amount of miles drivers travel on the road. 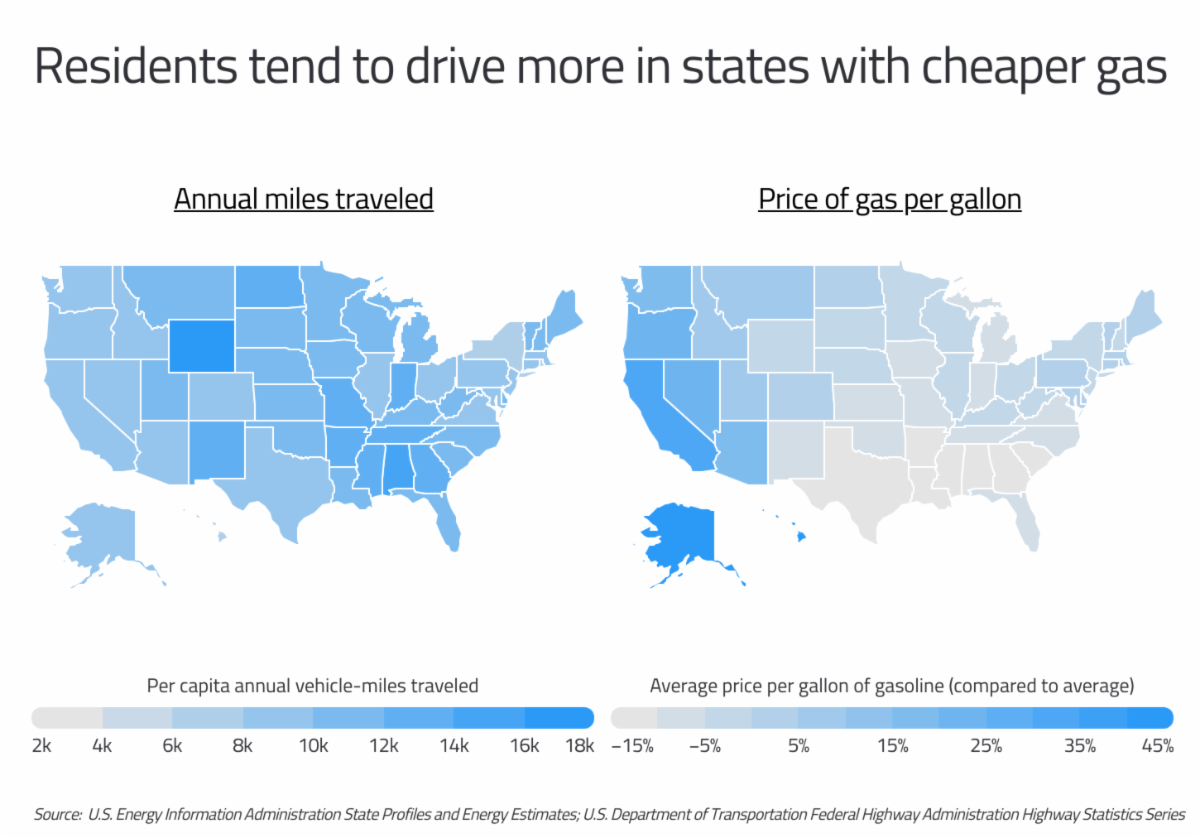 The states with the least expensive gasoline relative to the national average are primarily found in the South. Reasons for this include these states’ proximity to major petroleum sources or refineries in Texas and the Gulf Coast region, which lowers distribution costs, and lower gas taxes. Many of these states, like Mississippi, Alabama, and South Carolina, are also among the leaders in per capita vehicle miles traveled annually. In contrast, states in the West and Northeast have much higher costs of gasoline, and their drivers spend less time on the road. For instance, California has the third-highest gas prices of any state in the U.S. and ranks 42nd in vehicle-miles traveled per person.

When it comes to gasoline consumption, vehicle-miles traveled is also a major indicator. Rural states, mostly in the South, Midwest, and Mountain West, rank highly on both gasoline consumption and miles traveled because of their lower density and lack of other transportation alternatives. To determine the states consuming the most gasoline, researchers at Commodity.com calculated per capita annual gasoline consumption in gallons using data from the U.S. Energy Information Administration and the U.S. Department of Transportation. In the event of a tie, the state with the higher per capita annual gasoline expenditures was ranked higher.

For more information, a detailed methodology, and complete results, you can find the original report on Commodity.com’s website: https://commodity.com/blog/state-gasoline-consumption/