California Residents Have the 20th Most Auto Loan Debt

Perhaps no part of daily life changed as much by the COVID-19 pandemic as mobility—how often residents leave their homes and where they go. With stay-at-home orders in effect for large parts of last year, Americans upended their daily routines and, where possible, began working from home, increasing their reliance on delivery services, and avoiding public spaces, including public transportation.

Amid these changes, it wasn’t immediately clear how consumer spending and borrowing would be impacted, especially for cars and trucks. On the one hand, people weren’t traveling for pleasure or commuting to and from work; on the other, individuals that previously relied on public transportation or rideshare increasingly sought to purchase their own vehicles.

Despite these changes, total auto loan debt continued to grow at the same pace in 2020 as in 2019, according to data from the Federal Reserve Bank of New York. In fact, auto loan debt hit a new record high of $1.37 trillion last year and now accounts for close to 10% of total household debt.

Fortunately for borrowers, auto lenders were generally as accommodating as credit card and mortgage lenders when granting pandemic forbearances, so the rate of delinquent auto loans, like delinquencies across other loan types, decreased in 2020 after rising for the past half decade. 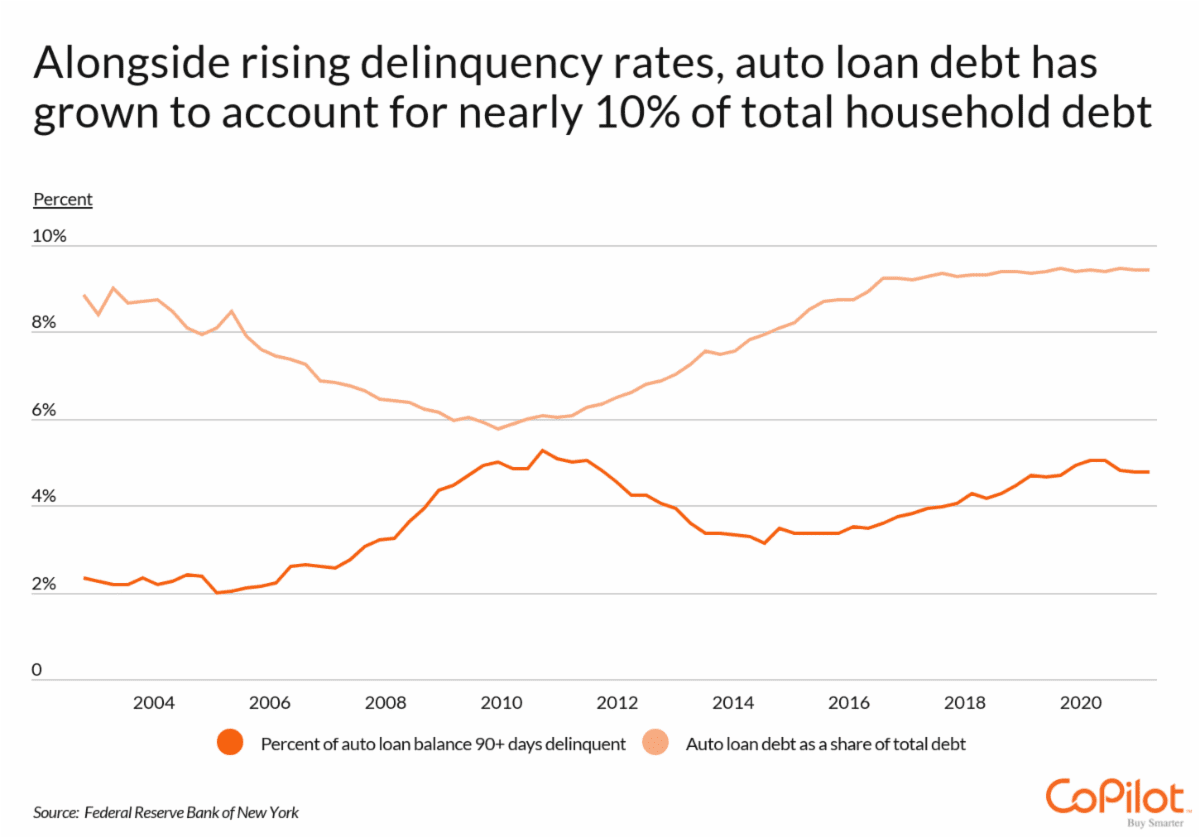 One of the leading reasons for the years-long ascent of auto loan debt and delinquencies has been the steady rise of subprime lending beginning around 2010. Borrowers with the worst credit scores (less than 620) more than doubled the value of new loan originations between 2010 and 2015 to a level that remained relatively stable in the years preceding the pandemic. 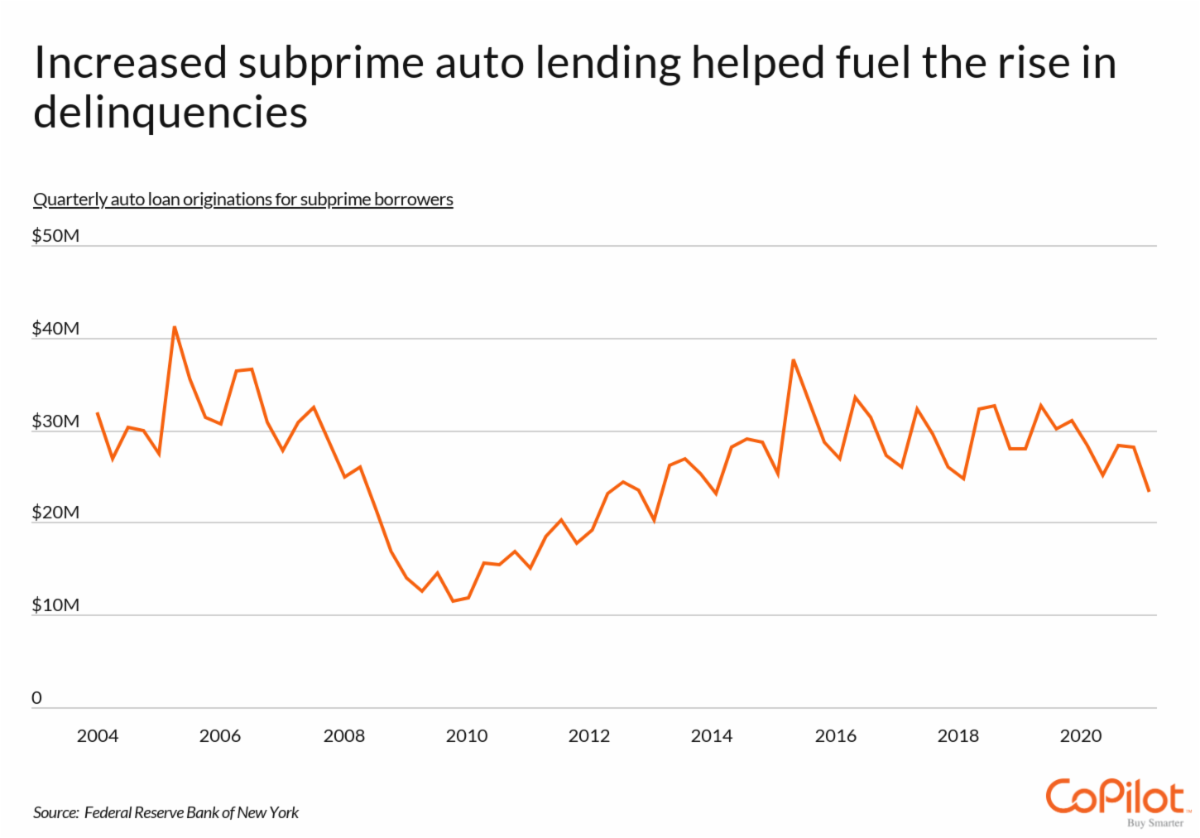 Since the start of the pandemic, however, new dynamics have emerged. Subprime borrowers may still be struggling to make their car payments, but they’re not taking out new loans at the same levels. According to data from the New York Fed and Experian, new subprime loan originations dropped quickly in 2020, while borrowers with high credit scores—and also young borrowers—made up the difference. Generation Z consumers grew their auto debt by 12% while Millennials accumulated 6% more vehicle loan debt in 2020 than 2019.

Another factor that changed dramatically in the midst of the pandemic was used car prices. The Consumer Price Index for used vehicles had been steadily declining since the end of 2013 until July 2020, when it began to skyrocket. In just over a year, used car prices increased by 45%, including record spikes of 10% and 10.5% month-over-month in April and June 2021. 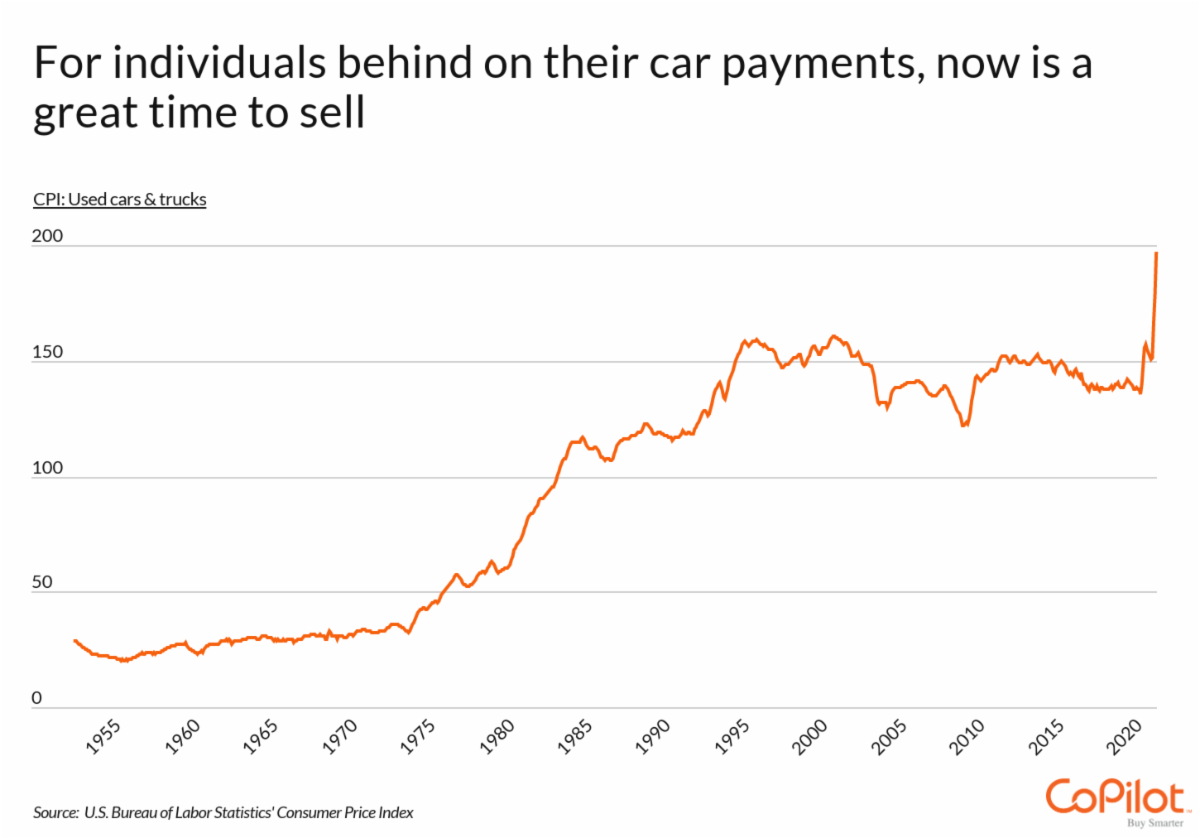 For borrowers struggling with their auto loan debt or lease payment, there likely hasn’t been a better time to sell a vehicle and cash in on the high used car prices. The average used car was worth about $5,000 more in July than in the spring, according to the CarGurus Index. The one catch for potential sellers? Record low inventory of both new and used vehicles means that finding a replacement won’t be easy.

To find out where borrowers are having the hardest time paying their auto loans, researchers at CoPilot analyzed data from the New York Fed and Experian, then ranked states by the percentage of auto loans that were at least 90 days delinquent at the end of 2020. Researchers also reported the percentage of total household debt accounted for by auto loans, total auto loans per capita, and the average credit score in each state.

The analysis found that the overall auto loan delinquency rate in California is 4.80%, compared to 4.76% at the national level. Out of all states, California has the 20th most auto loan debt. Here is a summary of the data for California:

For more information, a detailed methodology, and complete results, you can find the original report on CoPilot’s website: https://www.copilotsearch.com/posts/states-with-the-most-auto-loan-debt/