California Spends The 4th Most On Welfare

In its first year, the Biden Administration has embarked on an aggressive domestic agenda intended to offer a variety of economic support to lower and middle class Americans. The American Rescue Plan, passed in March, included direct payments to U.S. households, new investments into safety net programs like food stamps and unemployment, and increases to the Earned Income Tax Credit and Child Tax Credit. The Biden Administration followed this just a few weeks later with two proposals, the American Jobs Plan and American Families Plan, which would dramatically scale up federal spending on a variety of programs for infrastructure, job creation, education, child care, health, food assistance, and tax relief. Biden’s agenda has prioritized a strong role for the federal government in offering financial support to needy Americans and creating pathways to the middle class.

This agenda would represent a new chapter for the U.S. welfare state, building beyond the New Deal programs introduced in the 1930s and the Great Society programs enacted in the 1960s. These earlier programs created a wide-ranging role for the government in protecting disadvantaged citizens from economic harms. Today, public welfare encompasses a variety of government programs whose benefits are contingent on need, such as Medicaid, Temporary Assistance for Needy Families (TANF), and Supplemental Security Income (SSI).

Because these programs are typically based on demographic and economic factors, they have grown with shifts in the population and economy over time. According to the Census Bureau, in the last 20 years alone, state and local welfare spending has more than tripled in nominal dollars, rising from $233 billion nationally in 2000 to $743 billion in 2019. As a share of total spending, welfare spending has risen from 13.4% of state and local budgets at the start of the millennium to 18.8% in 2019. But even on a per capita basis, spending is up nearly 180% over that span. 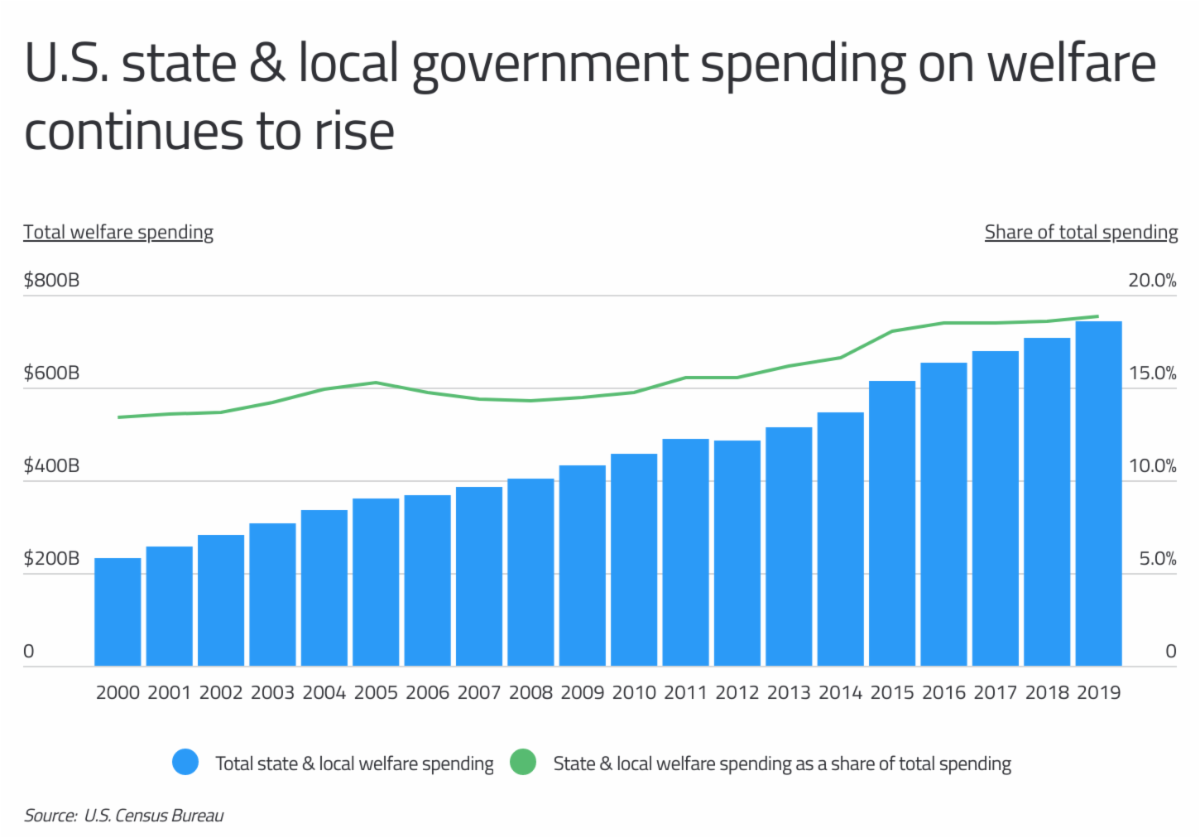 And in comparison to other budget items, public welfare is now the single largest category of expenditure in state and local budgets. Welfare spending totals $743 billion, narrowly topping elementary and secondary education spending ($717 billion) and running far ahead of other categories like higher education, highways, and protective services. 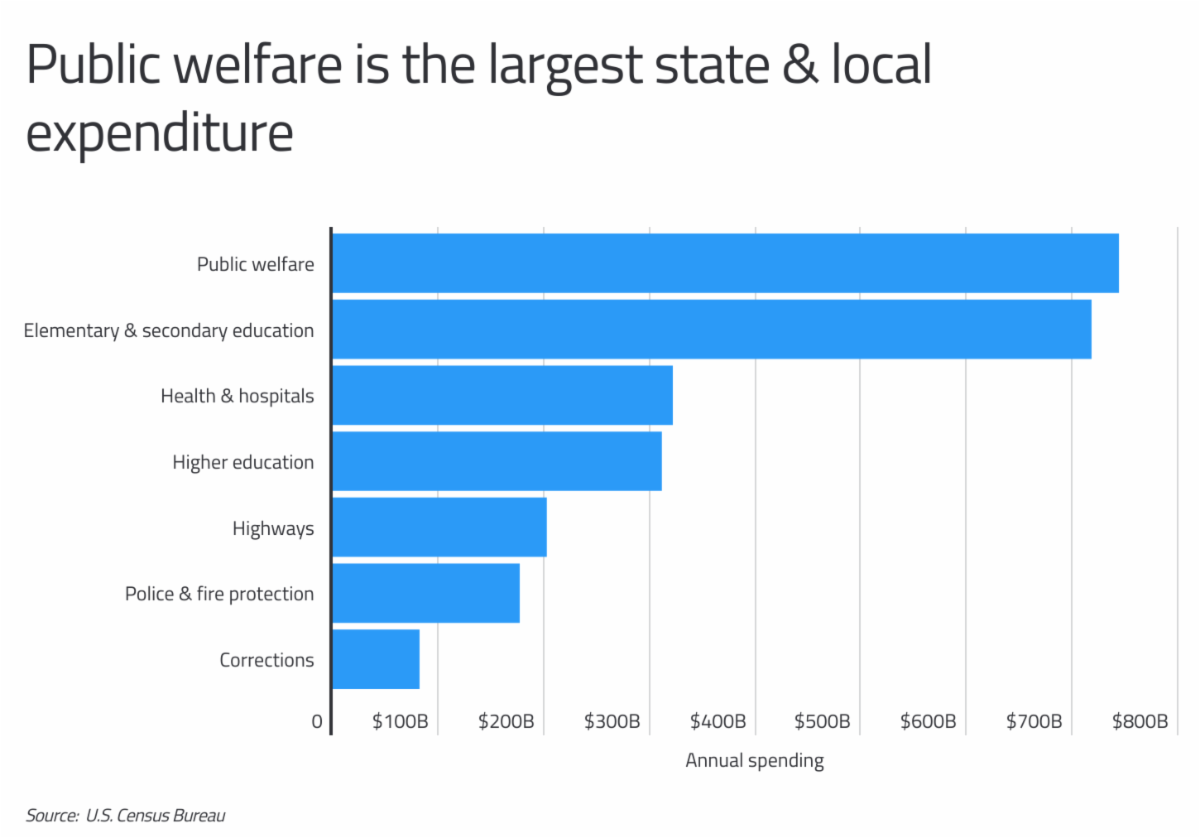 While the role of state and local government in welfare spending has grown everywhere, some states invest more than others in welfare programs. There are a variety of reasons why this is the case. For one, states with more liberal politics may choose to invest a greater amount in social safety net programs, which is why many coastal states have greater per capita welfare spending, led by New York at $4,094. Another source of disparities between states is their underlying population or economic characteristics. For instance, states like Arkansas, West Virginia, and Kentucky all spend more than a quarter of their budgets on welfare spending, which is likely due to the fact that they have greater populations of low-income residents who are eligible for state-administered federal assistance programs like TANF or Medicaid. 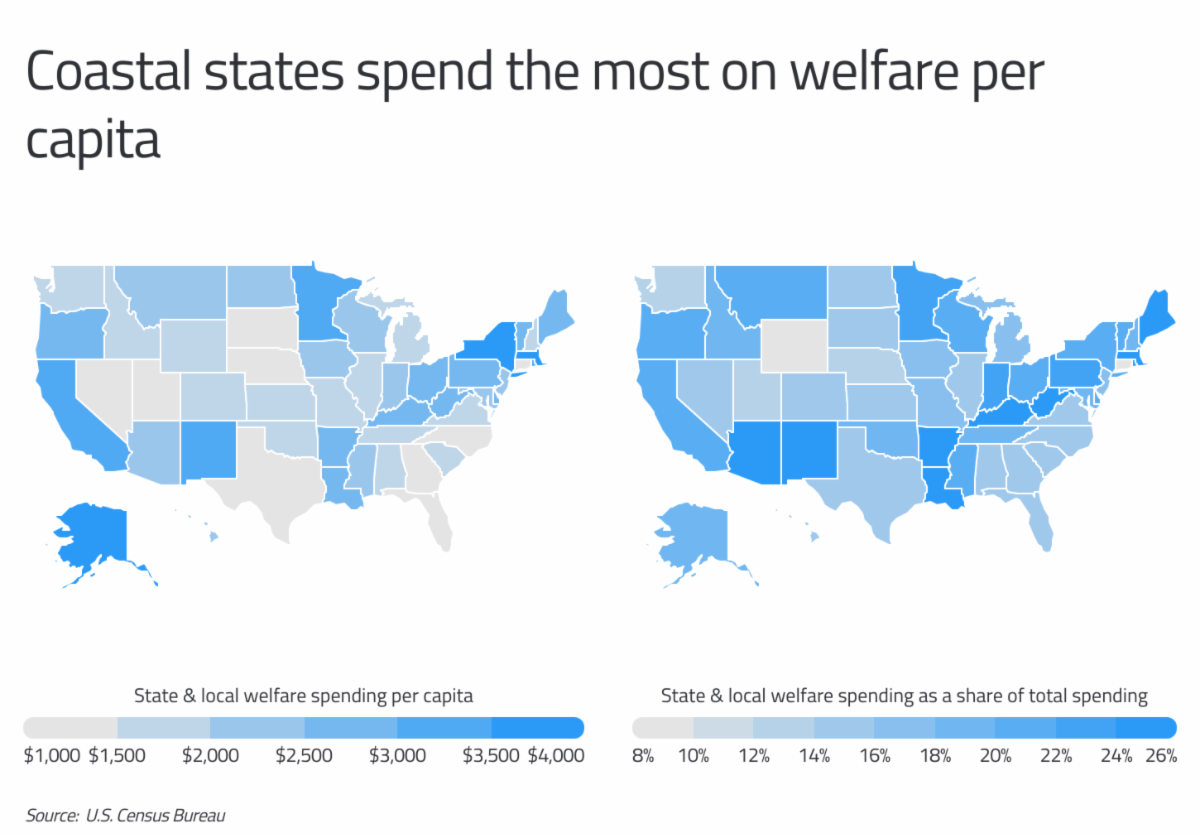 For more information, a detailed methodology, and complete results, you can find the original report on Commodity.com’s website: https://commodity.com/blog/us-states-welfare/