Today, the California State Auditor reported an uptick in applications by eligible individuals interested in serving on the next 14-member Citizens Redistricting Commission. To date, more than 13,735 applications have been submitted. The Commission is tasked with redrawing Congressional, State Senate, State Assembly, and State Board of Equalization districts.

“We’ve been closely monitoring applications since the initial application period opened on June 10th, and we have seen a steady stream of applications submitted,” said Elaine M. Howle, California State Auditor. “But over the last several days we received an uptick in applications, including a one-day period in which we received more than 1,000 applications. This leads me to believe many more Californians who are learning more about redistricting  and are developing an interest in the opportunity may now want to take advantage of the chance to draw California’s Congressional and State Legislative district lines. That is why I am extending the application period which will now close on Monday, August 19th at 5:00 p.m.”

Applicants must submit an application online at shapecaliforniasfuture.auditor.ca.gov. The application takes just minutes to complete.

“My office has been analyzing the number and flow of applications since we began accepting applications. It is clear to me that for the last week, we have seen a significant increase and with every passing day, we are getting a broader application pool that is more and more representative of California’s diversity. I’m thrilled that so many civically-involved Californians are interested in being part of shaping California’s future and want to keep the process open until August 19th at 5:00 p.m. to make sure that everyone who is interested has the opportunity to apply,” said Howle.

For more information about application data, eligibility requirements, or to apply to be a member of the 2020 Citizens Redistricting Commission, please visit shapecaliforniasfuture.auditor.ca.gov or call (833) 421-7550. You can also follow us on Facebook and Twitter at @ShapeCAFuture.

About the 2020 Citizens Redistricting Commission

Every ten years, after the federal government publishes updated census information, California must redraw the boundaries of its Congressional, State Senate, State Assembly, and State Board of Equalization districts. In 2008, California voters passed the Voters FIRST Act authorizing the creation of an independent Commission comprised of 14 members. The 2020 Commission will include five Democrats, five Republicans, and four who are either registered without, or “independent” of, any political party (decline-to-state or no party preference) or with another party. The Commission is responsible for drawing the lines of each district. The initial application period for new Commission members began on June 10, 2019, and will now run through August 19, 2019 at 5:00 p.m. 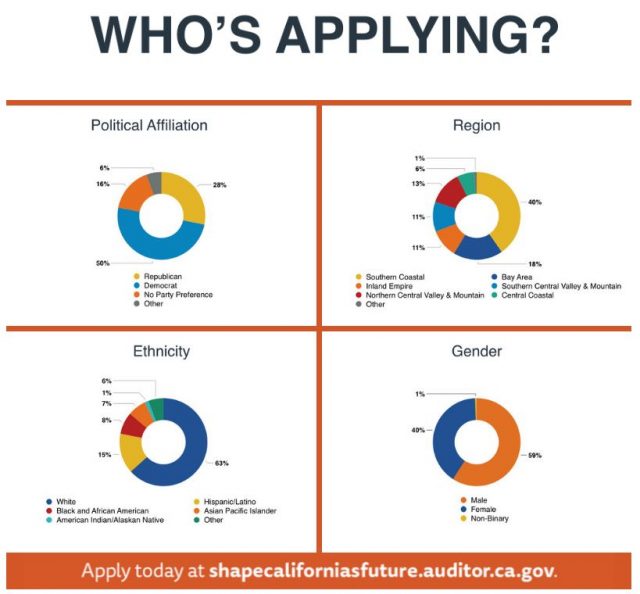