According to a report produced by Public Policy Institute of California (PPIC), surface water trading accelerated during the 1987-1992 drought, but trades were flat during the 2000’s. Because farms have more water rights, they are the primary source of sales. Buyers include other farms, cities and wildlife refuges. The water purchased has historically been surface water.

The Fox Canyon Groundwater Trading System was the first trading system of a SGMA/GSA/GSP managed sub-basin. Here is a federal press release about its launch.

This slide below from the California Water Commission (CWC) explains the SGMA relationships to water trading. 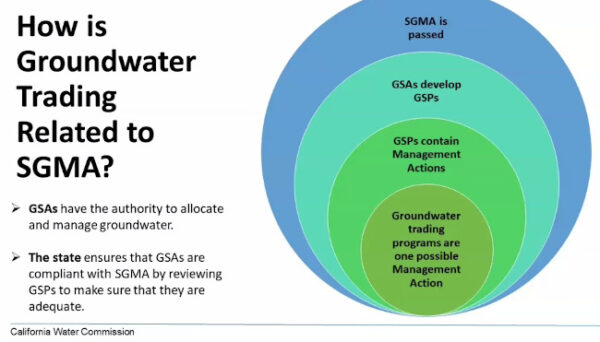 Sarah Heard from The Nature Conservancy spoke in the recent CWC water trading workshops and explained her four-year involvement with the Fox Canyon water trading project. She said that GSPs should provide water for nature and that buying water should not be essential for nature’s survival. Environmental stakeholders may not be landowners, but they are stakeholders. This UCANR article is essential to understanding the components of the process.

The two-day workshops held by the California Water Commission focused on vulnerable water users or Disadvantaged Communities (DAC). The speakers and agenda are in the preceding link. Videos will be posted.

Dave Runsten, representing the Community Alliance of Family Farmers (CAFF), stated that many land owners want to sell leased rice farmland into “more valuable” uses. Some areas have only groundwater for all water uses, because there is no surface water. As groundwater is sold or traded, what becomes of these family farmers? 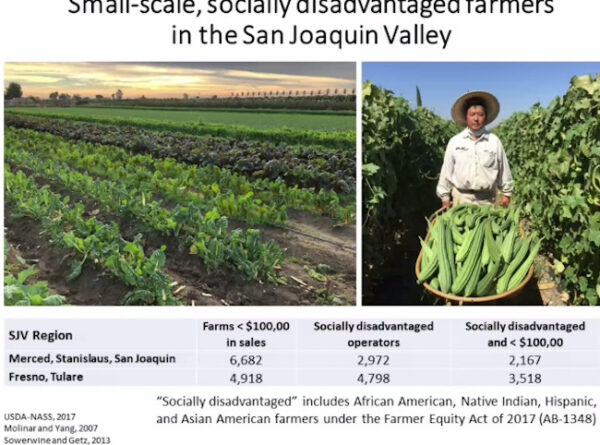 Breakout sessions discussed issues such as local control versus state oversight, where according to Laura Jensen of the CWC, users are split on this topic. Another topic was anonymous trading versus transparent regulations. Sarah Heard said that anonymous trading protects growers of different sizes. Aaron Fukuda of Tulare county where there are 441 acres in overdraft near Tulare, said trading should be rule based and he pointed out that SGMA has created “haves and have nots”, those with surface water and those without. Kimberly Gallaher said that people prefer trading with known entities rather than an anonymous entity. It was noted that the Fox Canyon system is double blind with a neutral 3rd party oversight. Most felt that the best role of the State was financial and framework, but that geographical issues defined the details.

Joe Yun, Executive Officer of the California Water Commission (CWC), reported that of 46 GSPs 19 plan on groundwater trading. He said there is an open source water trading/accounting platform under development. Participation in trading is voluntary, he said. The goal is a White Paper on Groundwater Trading to be publicly available in January 2022. 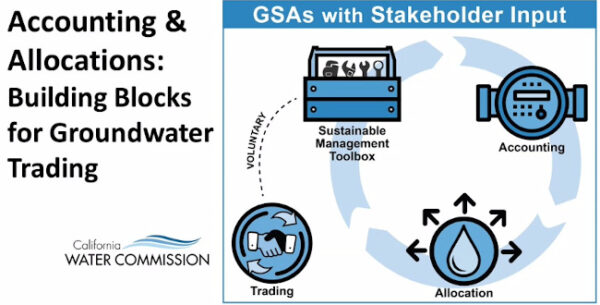 Topics brought up in this segment included:

•Protection of vulnerable users (Environmental Defense Fund)
•Is groundwater transfer trading a commodity or a security? Is it subject to Security or Commodity laws?
•How to maintain the Groundwater Dependent Ecosystems (GDE)? Reference: groundwaterresourcehub.org
•One large buyer can influence entire market.
•80% of Hmong farmers are leased land holders and need protection
•Is trading for sub-basins only?
•Growers typically reduce acreage rather than sell water
•Surveys show that there is lack of trust in the GSAs to protect drinking water. There are 12,000 dry wells planned and known in the San Joaquin Valley. See maps gspdrywells.com
•Water is a right, regardless of ability to pay and should not be sold according to the Leadership Council

•How do we protect surface water? How do the California Surface Water rights rules apply?
•SGMA has no language for protection of vulnerable communities. It was not in the legislation
•SGMA has no language for groundwater trading.
•Water arbitrage occurs regularly. This happens when someone sells fresh surface water and pumps degraded groundwater.
•GSAs are controlled by Settlement Contractors
•How does the buyer of traded water know the purchased water is ag-ready, particularly in light of the California stated goal to recharge all groundwater with treated wastewater?

During the two days, 129 people signed in to the Zoom sessions. The organizer, Lisa Beuller, posted surveys about some of these issues. The final results will be on the CWC website: https://cwc.ca.gov/Programs-and-Topics Click Groundwater Trading on the menu.

To read about the author click sherylhamlin dot com