California’s 2021 wildfire season has not been the state’s largest, or its most deadly. In 2020, more than 4.2 million California acres were ravaged by wildfire. Unmatched human devastation occurred in 2018, as 100 lives were lost in the Butte County town of Paradise and elsewhere.

As of November 8, the California Department of Forestry and Fire Protection reported 8,367 wildfires had burned nearly 3.1 million acres in the state in 2021, a figure that includes fire incidents on U.S. Forest Service land. Three lives were reported lost in these wildfires.

The numbers themselves do not set any records, but changing wildfire conditions have continued to create alarming new “firsts.” 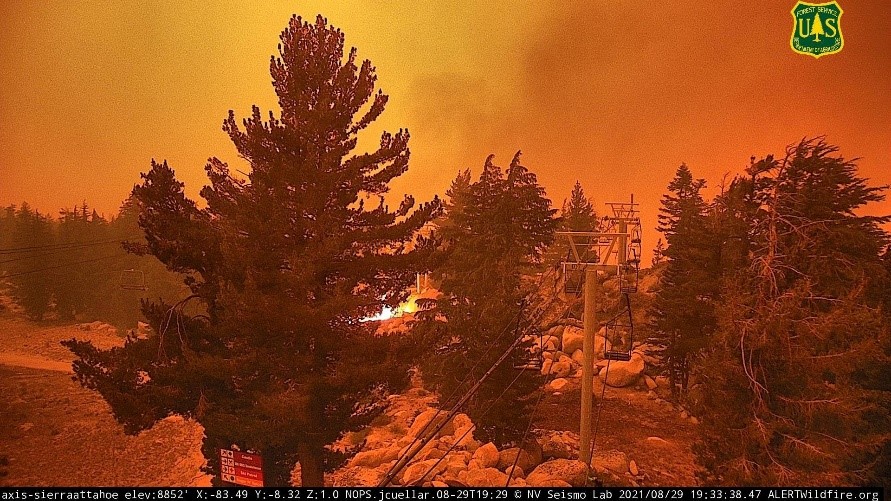 It was a long-held belief several factors in the upper Sierra provided a natural barrier that would prevent wildfires from crossing into the Lake Tahoe region. At high elevation, trees and vegetation that provide fuel to fires are sparse, and the residual moisture left behind by the snowpack leaves cooler, damper conditions. If all else failed, the iconic granite of Echo Summit was seen as the ultimate last line of defense for South Lake Tahoe.

In April, when California’s snowpack is usually at its deepest, the Department of Water Resources reported it was at just 59 percent of average. As Scientific American explains, a lackluster winter was followed by the hottest California summer in 127 years of recorded history, setting the stage for what was once thought impossible.

In August, California’s two largest fires of 2021 – the Dixie Fire and the Caldor Fire – both crossed the Sierra Nevada’s “wall of granite” in the span of a few weeks. The entire city of South Lake Tahoe had to be evacuated, creating a ghost town on what, in “normal” years, would have been a bustling Labor Day weekend. Firefighters fought valiantly and stopped the fire’s march into town. However, hotels, restaurants, and other local businesses faced economic disappointment from shuttering during the final weeks of summer.

West of Echo Summit, fire tore through Sierra-at-Tahoe ski resort in Twin Bridges, sparing the main buildings but causing damage to trees and ski lifts. The resort has announced it does not expect to re-open in 2021.

It is notoriously difficult to quantify the full cost of wildfires. For example, a report from the U.S. Census Bureau says the damage total for California’s deadly 2018 fire season was “at least” $267 million, but that only includes insured property damage and fire suppression costs.

In 2020, a research team put the total economic cost of California’s 2018 wildfire season at $148.5 billion. That amount includes capital losses, health costs, and indirect losses, with nearly a third of indirect losses occurring outside of California. Out-of-state indirect costs are attributed in large part to disruptions to the supply chain, as well as lost productivity due to poor air quality in regions hundreds of miles from an actual fire.

At the local level, some costs related to business and hotel closures in a tourist-dependent community like South Lake Tahoe are more easily measured. South Lake Tahoe reported almost $40.9 million in tax revenue to the State Controller’s Office in 2020, and $44.8 million in tax revenue in 2019, the last full year before the pandemic. Even in a year affected by COVID-19 restrictions, South Lake Tahoe anticipated $40.5 million in General Fund revenues in its Fiscal Year 2020-21 budget, with 31 percent of those GF revenues from transient occupancy (hotel) taxes, and another 13 percent from sales taxes. Many visits were cancelled due to heavy smoke even before evacuations were ordered.

Just across the border in Nevada, South Lake Tahoe gaming revenues were down 69 percent in September 2021 from September 2019, highlighting the magnitude of the economic losses.

According to Scientific American, for every degree Celsius of warming, the air can absorb 7 percent more water, exacerbating dry fire conditions that already have extended the average California fire season by 75 days. Focused action on climate and forest management both are critical to curbing that trend.

In April, the Legislature passed a $536 million early action package to invest in forest health and fire prevention ahead of wildfire season. The FY 2021-22 California Budget Act includes another $988 million for wildfire and forest resiliency projects.

In September, Governor Gavin Newsom signed into law a package of natural resources bills that will invest an additional $15 billion over three years into climate resiliency, including a $1.5 billion wildfire and forest resiliency package.