Big tests ahead for new Legislature

David Howells, Senior Equipment Mechanic, officially retired and was honored by the City Council with a Retirement Tile. He and his wife Denise came to accept his Tile. David has worked for the city since 1988 when, as Mayor Craven said, ”The City had no money, and the trucks didn’t have radios” Mr. Howells also contributed by volunteering with families and children in the Boy Scouts as a Leader in Troop 225. May many healthy years follow David Howells’ retirement.

In an interestingly similar subject matter on an Agenda Item, Asst. City Manager presented a proposal to Amend Policy 1.04, Scheduling City Council Meeting Agenda Items. Page 133 of the Agenda Packet explains the proposal in its’ entirety, but the short version is to replace the current system by which a Councilmember can have an item placed on the Agenda for a public meeting with only the agreement of one additional Councilmember, to an increase of two additional Councilmembers. This is intended to “reduce the overhead attributable to the generation of the Staff Report and research required of the city staff when an item is placed on the Agenda for discussion” per the Assistant City Manager. As correctly pointed out by Councilmember Santangelo, enacting the new proposal would make it very difficult for a minority (less than three) opinion to be heard by the Council, as there would be a requirement for majority consent just to get an item on the Agenda. The proposal was sent back to subcommittee for further review.

The Brown Act is related to the Consent Calendar item that was accepted without exception, and the Policy 1.04 in that they both are addressing issues of public disclosure of the public business of the people, which is what local government is all about.

A Tiered Payment Schedule for RATP was the next item up for review by the City Council. As a result of the pandemic, the contract agreement between Roadrunner Shuttle and the City needed renegotiation, to accommodate the payment for services that was currently under a “vehicle revenue hour” agreement. Previous amendments to the agreement due to the pandemic are expiring, and it is time to establish a performance based agreement once again. The tiered payment scale was calculated by the city from the actual records from the past two pre-pandemic years to develop an average ridership activity per month, that could then be tied to a payment scale that reflects the gradual return to normal ridership in the future. During the questioning by Council, 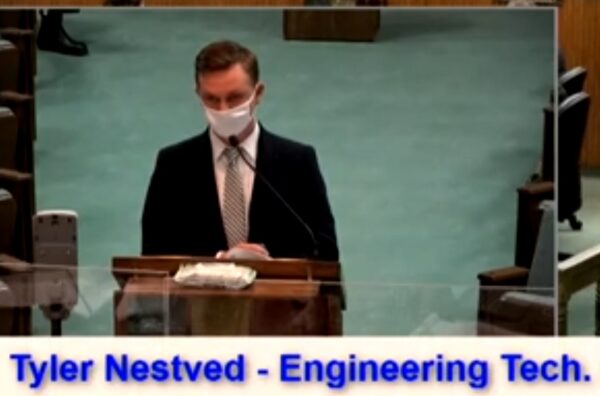 Engineer Tech II Tyler Nestved had to point out that the increased fare schedule, and its effect on ridership has not been factored into the calculations as of yet, as there is no data to support the new fare schedule.

The Council approved the Tiered Payment Schedule by a vote of 3 Ayes. Mayor Craven and Councilmember Kildee were recused due to business interests within 500 feet of a trolley stop.

The Council anticipated some public comments on this matter, but there were none in the chamber at the time. Those who wanted to comment did so in the General Comments time, which occurred AFTER this discussion was already complete.

City Council heard a briefing on the proposed ban of  “Expanded polystyrene” or “EPS” from George Winkler,  Senior Management Analyst. Generally used to make cups, bowls, plates, trays, clamshell containers, meat trays, ice chests, shipping boxes, and packing peanuts. “Expanded polystyrene food container” means any disposable food container, ice chest, or cooler made of expanded polystyrene that is not wholly encapsulated or encased by a more durable material. There will be an exemption granted for businesses in Camarillo which use these storage devices and have already purchased them for their business, however the exemption is for one year, with no extensions, from the date of the ban. It is assumed that because this new ordinance will not go into effect until January 2022, that most businesses will have already depleted their stock of the soon to be banned material, and will already be using materials that are not banned before any hardship exemption will expire in January 2023. The motion to enact the ban carried unanimously.

Betsy Artuso came again to express her concern about the increase in cost of the monthly bus pass. CAT bus pass increased from $25 to $80. General public increased from $55 to $120.   55 to 65 year olds were raised from $25 to $120. Ms. Artuso expressed that the city chose the remarkably higher bid (650,000 higher) due to familiarity with RATP, their ADA compliance record, and to satisfy a time constraint to execute a contract. There has not been time yet to research the accuracy of Ms. Artuso’s claims. Richard Figueroa Barrajas spoke on the increased bus pass pricing as well, as he has at two past City Council meetings. 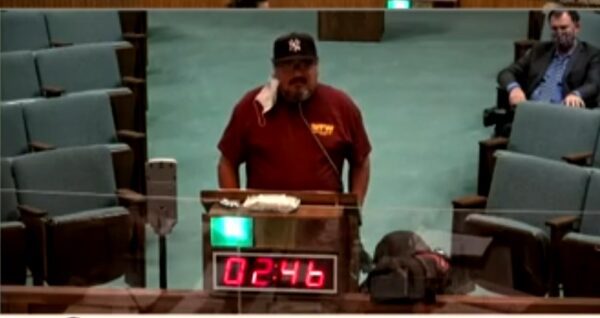 He is a regular bus rider, and can now longer afford a monthly pass. His Dog Park outings for his service dog are now infrequent. As a retired military member who suffers from PTSD, the freedom of movement the bus pass afforded no longer exists, and negatively affects his mental health. He asked for a fare review, as only two drivers knew of any information regarding a fare increase in the time frame in which the city states notices were posted. No riders that Mr. Barrajas knows were aware of the increase.

Homeless resident Timothy McGeary commented on the lack of progress in finding solutions for the homeless population in Camarillo. 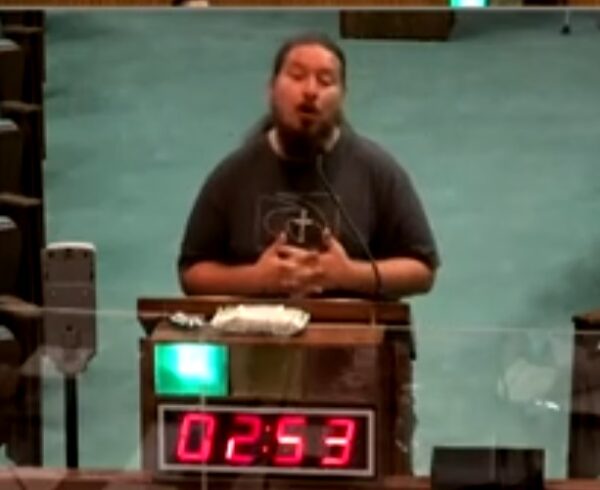 He is a father of 5, and living in a vehicle near Pancho Road. He stated that bulldozers took property on the same day they arrived with no notice, but it wasn’t clear if he was referring to a situation at Pancho Road or concerning a homeless encampment elsewhere. Mr. McGeary stated to the City Council that he had contact with Camarillo Police Chief Deputy Sheriff Tennessen as well as Captain Matthews. The Chief put him in touch with the County. He stated that a parking lot solution has been floated, yet there has been no progress toward that action. He is still hopeful for a solution, and will contact the District 5 Camarillo Councilmember in the near future. His comment starts at the 2:41 mark of the YouTube and is very compelling.

Spencer Richie also spoke for her second time on the increase in the cost of a bus pass. She also believes, as does Ms. Artuso, the approval of RATP as the vendor for bus service was also due to familiarity and expedience, and believes the City can be more thrifty with regards to landscaping and scheduled tree replacements and find some way to help those with the hardship of the bus pass fare increase.

Two noteworthy comments by Councilmembers at the end of the public meeting were Councilmember Kildee, who noted the 4th of July fireworks event went off as planned with essentially no issues. The city personnel responsible should be acknowledged for their success. Councilmember Mulchay commented that the July 8th Airport Committee meeting was uneventful, without stating that over 50 citizens either called in, or left emails expressing concern over airport expansion. One person stated that he represented a homeowner association that polled their entire property and every member of the 500 adults living there were against airport expansion.

Why I support Tim Sprinkles For Camarillo City Council District 5

Big tests ahead for new Legislature