Can Unity Occur Without Election Validation?

Half of the country still questions the integrity of the election after seeing and hearing of countless irregularities. As a comparison, if you saw someone hit another car and that caused damage, your single affidavit confirming what you saw is enough evidence in a court of law to confirm to a judge that a crime took place. 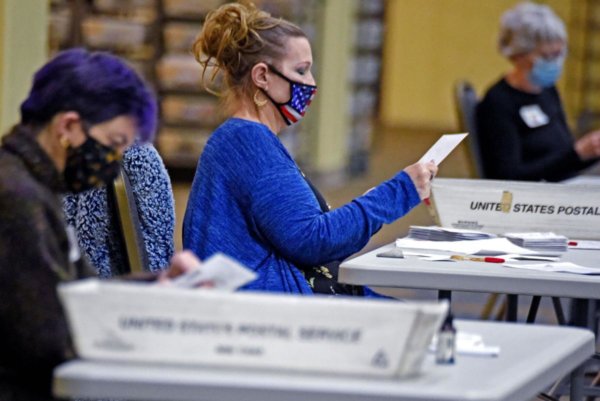 If you witnessed someone stealing from a cash drawer, or groping a woman, your single testimony (and affidavit under penalty of perjury) would be sufficient for a case to go to trial and a court where evidence is presented.

How can one side argue that dead people voted, have proof of that, and the court system deny examining that information? Or did it never get to the courts properly to render the proper decision? Is that the fault of the lawyers, a corrupt system, or a lack of courage to stand for right vs wrong?

How can one side argue, and show video proof, that suitcases of ballots were hidden, then retrieved after hours, to be processed, but that is not enough for the other side to agree and say, “something was definitely not right there”?

How can one side argue and prove that there are 1 million voters, but 1.2 million votes were received? Shouldn’t the other side say, “something is definitely wrong there”?

What happened to honesty, respect, and due diligence to fair treatment of others and our judicial system?  While court cases were submitted, research indicates that the majority, if not all, were denied due to technicalities.

How would you like to be on the opposite end of a lawsuit and your one or two witnesses, and their signed affidavits, are not sufficient to support your case and you lose without going to trial?

For the sake of our country, let’s get the legal system working and get to the bottom of these questions so we can move forward as One Nation and support a president, regardless of party affiliation.

No russian influence this time! Amazing! Was strange when the electoral numbers stopped being counted on live tv.

Take fraud accusation and follow up on the facts. Example Georgia out of state voters. https://www.politifact.com/factchecks/2021/jan/04/donald-trump/no-evidence-4925-voters-out-state-voted-georgia-pr/
Look up the Las Vegas fraud votes

Politifact? LOL. Don’t you have anything to do but troll this page with leftwing propaganda? Get a life.

In Trumps time as president he has told more lies than truths. He has done it so consistently that it for those who chose to believe him unquestioningly a distorted reality has been established. However, the facts and the truth remain unaltered and at odds with his idiotic rhetoric.

Chew on this sequence of events:

1. Communists/democrats, along with hostile foreign nations, commit election fraud at a level never before seen in the 2020 U.S. Presidential election.

2. Patriots, including a very small number of politicians, rise up and stand against this theft of the Republican form of government and the election itself.

3. Republican leaders denounce all attempts to have facts heard in a formal judicial setting. Democrats, of course, concur.

4. Patriots, enraged by the hostile revolution against America and our government rise up, and are continually met with condescending comments from republican leaders, especially Mitch McConnell, Kevin McCarthy, Mitt Romney, George W. Bush, and others.

5. Millions of Patriots arrive in Washington, D.C. on January 5th for a large rally on January 6th as Congress meets in Joint Session to count Electors.

6. Elements of the communist group Antifa arrive in D.C. and initiate violence at the Capitol. Well known Antifa operatives literally enter the House Chambers and are identified by the media as “Trump supporters.”

7. An unarmed 14-year female Air Force veteran named Ashli Babbit is shot and killed inside the U.S. Capitol by Capitol Police and dies.

8. Vice President Pence flees the Capitol via motorcade while Members of Congress depart via the underground tunnels in the Capitol.

10. Republican leaders publicly condemn the violence of the “Trump supporters.”

11. Ready-to-go protesters are on the evening news (1/6/21) with pre-printed banners which read “Stop the GOP Coup” – almost like there was a plan.

12. Democrats and republicans accuse Mr. Trump and Patriots of a “coup” and then lecture Americans on the leaders’ desire to “follow the Constitution” and “follow the process.”

The irony of your mononym is staggering. Have you considered going by Disgruntled Fantasist?

That’s not an argument, Erika.

Those are clearly the views of a Disgruntled Fantasist.

That’s not an argument, Jamie.

I suggest you get happy and get real. Even one of those would be a start if you can’t manage both at once.

Did you actually click on the link to the background info? Here it is again:

It’s not even pro-Republican Party, Susan!

The point is your “patriots”, aren’t. They are puppets of Trump’s ego that have been taken for a ride, nothing more. It is, as Donald would say, SAD. But much more so than any time he used that word.

Well written article with a lot of common sense questions most of us ask ourselves every day. In a courtroom a sworn affidavit is usually ALL that is necessary to convict when there are witnesses to crimes. Regarding the election lawsuits, no information was ever even reviewed due to reported procedural or technical issues. These are just other examples how the liberal media are able to push under the rug what most Americans wanted to hear – the truth. Why bother to vote if the election can be stolen – even in America. I agree the legal system needs to be overhauled as soon as possible in order to move forward together.

Fortunately the election wasn’t stolen. They gave it good try but democracy is strong.
Even in America.