A Florida man who breached the Senate floor on Jan. 6 while carrying a Trump flag was the first Capitol rioter sentenced with a felony offense.

Prosecutors are seeking a minimum 18-month sentence for Paul Allard Hodgkins. In a July 14 court filing, they alleged that he, “like each rioter, contributed to the collective threat to democracy” as they forced lawmakers, reporters, staff and Vice President Mike Pence into hiding as they convened to certify President Joe Biden’s victory.

He was sentenced to eight months in prison.

Video footage described in the report shows Hodgkins, 38, sporting a Trump T-shirt and flag on the Senate floor. At one point he took a selfie with the self-described shaman, who is also awaiting trial for participating in the riot. 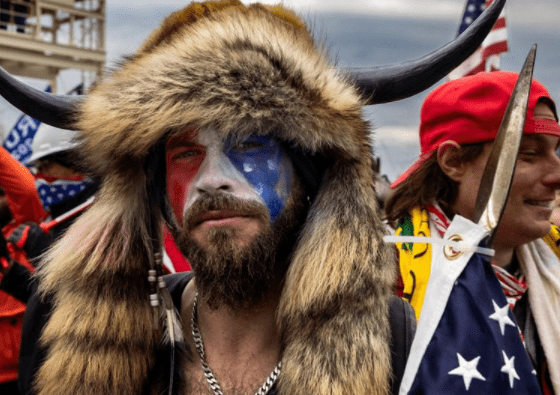 Lawyers for Hodgkins had argued that the court of public opinion was enough punishment to avoid a prison sentence.

“Whatever punishment this court may provide will pale in comparison to the scarlet letter Mr. Hodgkins will wear for the rest of his life,” his lawyer, Patrick N. Leduc, wrote in a filing on July 12.

That filing likens Hodgkins’ actions to those of Anna Lloyd Morgan, a 49-year-old from Indiana who was the first of hundreds to be sentenced. She pleaded guilty to misdemeanor disorderly conduct in June and was given three years of probation.

Though Hodgkins was never accused of assaulting anyone or damaging property, prosecutors noted that when he boarded a bus from Tampa, Florida, to D.C. he had rope, protective goggles and latex gloves, and said that demonstrated that he was prepared for violence.

Prosecutors also said, however, that Hodgkins deserved leniency for immediately coming forward and pleading guilty to his obstruction charge, which carries a maximum sentence of two decades. But they noted that “time and time again, rather than turn around and retreat, he pressed forward.”

“When a mob is prepared to attack the Capitol to prevent elected officials from both parties from performing their constitutional and statutory duty, democracy is in trouble,” Federal District Judge Randolph Moss said Monday. “The damage that they caused that day is way beyond the delays that day. It is a damage that will persist in this country for decades.”

Leduc argued in his filing that Hodgkins was “a man who for just one hour on one day lost his bearings” and “made a fateful decision to follow the crowd.” It also noted former President Abraham Lincoln’s attempt to reconcile immediately after the Civil War.

“The court has a chance to emulate Lincoln,” Leduc wrote.