Our Constitution, even though it’s not perfect, has done more to promote freedom, independence, justice and prosperity than any other political document in history.
.

Our Founders risked everything to establish the United States. They worked long and hard to write the charter of the nation which became the only one at the time focused on creating a society focused on guaranteeing the rights of Citizens and putting them in control of their government. Even after they approved it in 1787, Congress still didn’t think they got it right, so they added 10 amendments in 1791, now known as the Bill of Rights. Since then, it has been amended 17 more times.

Of course, as we know, implementing it hasn’t been easy. Justice hasn’t always prevailed, but things have improved as we’ve tried to follow it. It is our roadmap to a Constitutional Republic.  Not a rule of men or even of a majority, but rule of law. Not everyone agrees on what the Constitution means or says. Some flat out disagree with it, but name a better one.

We haven’t seen the actual proclamation document the council will be issuing, but here’s a model one used by many cities: 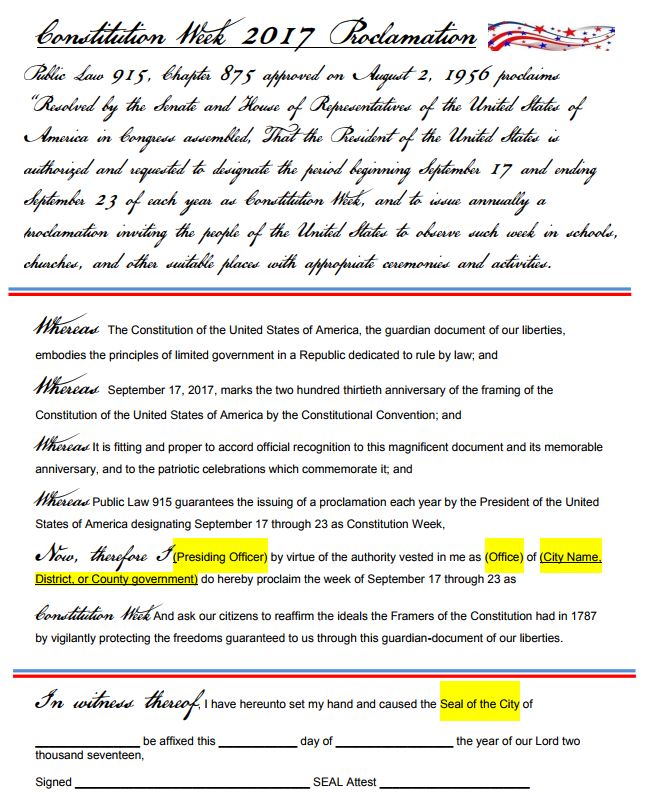 The Bill  of Rights

Read the full text of the Constitution

Very proud to have this Lady as my partner and wife.

Amen- Her city council speech this week was classic.

Thanks Citizens Journal… for honoring our country, our way of life, and our nation’s history and life’s blood!

Americans throughout the United States and millions of others in the world celebrate our United States Declaration of Independence on July 4th. Importantly, additional dates to remember include Constitution Week, celebrated September 17-23 every year since 1956.

In the mid-20th Century Congress tried to remind ALL Americans that while Independence is essential and precedes our nation’s founding, it is the Constitution of the United States that confers to us and our posterity the laws that deliver our liberties make our lifestyles possible… But only if WE THE PEOPLE fulfill our civic duty to govern!

Thanks, Deborah. Fine message. Loved your speech on it at the Oxnard City Council last night. Readers, you can watch video of it in the public comments on items NOT on the agenda section. Yes, that’s right. It wasn’t even on the agenda, even after two requests from me. Constitution week Sept 17-23 is designated by a public law for celebration, but the council chose not to honor it formally, although a couple of members referred to it informally in their comments.