In a casual tone on a feed from his Central Command Post in the Middle East, General Kenneth McKenzie admits the incineration of an Afghan family of 10 was a tragic mistake. Two days after 13 service members including one Navy medic and 12 Marines were killed at the Kabul Airport Abbey Gate, a supposed ISIS-K vehicle was targeted by a Predator drone.

President Biden addressed those responsible for the attack, and the killing of 13 servicemembers, just prior to the drone strike on the innocent Afghan civilians, “We will not forgive. We will not forget. We will hunt you down and make you pay.” The president said that he ordered the Pentagon to “develop operational plans to strike ISIS-K assets, leadership and facilities” in his address to the American public from the White House.

“We will respond with force and precision at our time, at the place we choose and at the moment of our choosing,” Biden said, indicating that the U.S. had leads on the ISIS-K leaders who ordered the attack.

Those leads now appear to simply be murderously wrong. At the time of the drone attack, the same General McKenzie stated there was confirmation of a secondary explosion, which would indicate the ordinance in the vehicle detonated. This was affirmed by the Pentagon with additional information that “two high profile ISIS-K leaders are no longer on the roster” claimed to be confirmation that three ISIS-K planners and facilitators were killed, and another was injured in the strike. 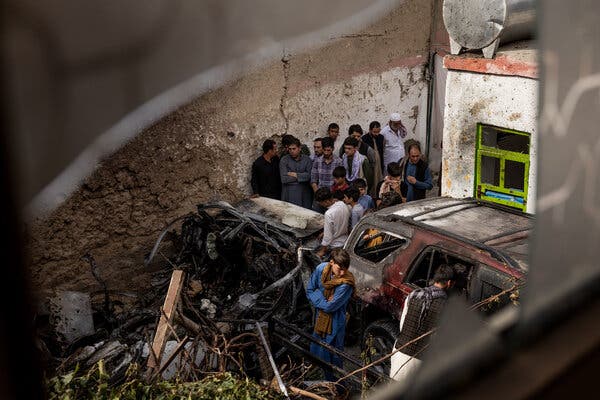 Pictures supplied by “media on the ground” told a different story from the very beginning. One picture portrayed a destroyed vehicle adjacent to a wall, with another vehicle adjacent to the burned out shell also displaying heat damage. The wall behind the supposed terror vehicle had no tell tale signs of a secondary explosion.

A second series of photos which show the shell of an entirely different car on a street, with a close up of what the Pentagon claimed were “evidence of conversion” from a passenger vehicle to a rocket platform. The evidence was what appeared to be small launch tubes for mortar rounds.

As is readily apparent,  there again is no blast radius in these photos as well, or any indication there was a secondary explosion.

The “over the horizon” deterrence strategy is killing civilians with no impact on terror cells, and with today’s admission Central Command presents facts which are dubious at best.  We wait for the final report of the Abbey Gate bombing to see if Central Command will stay with the story a suicide bomber killed 13 American service members and hundreds of Afghan civilians with a bomb vest.

Well, there are scorch marks on the wall but the windows didn’t suffer any damage and windows are usually the first thing to go in an explosion — unless Akmed’s Window Service is johnny-on-the-spot with widows repair in downtown Kabul.
The gray car looks like it was involved in a fire and was hit with a blunt object on the rear. It looks like it was struck with a solid object and caught fire and burned. The pipes in the rear of the car might be rocket tubes. They certainly aren’t mortar tubes as they are open on both ends.
The car might have been hit with a dud rocket but I think even a dud fired from a drone at drone altitudes would punch a hole in the trunk, not merely dent it. That looks more like a rear-ender that wound up being a car fire.
One of the first rules about lying is you have to make the lie fit the evidence. It just blows your credibility to pieces when the evidence totally contradicts your lie.