Share
Facebook
Twitter
Linkedin
ReddIt
Email
Print
Telegram
By Doug Partello
The City Council unanimously voted, at the Jan. 26, 2021 City Council Meeting, to approve the staff recommendation, from Emilio Ramirez, Housing Authority, to use $375,000 in CARES Act money to evict the inhabitants of the Halaco slag pile encampment. There are about thirty-five there now. No date was given.
They are offering very temporary shelter with vouchers. The question of how long those vouchers are for was not answered at the Jan. 26th Council Meeting. Emilio said 30-40 vouchers available. Section 8 housing applications are closed.
This fateful decision has many potential negative ramifications for those folks in the encampment, the community at large, and the surrounding protected habitat.
The question of whether they would be offered vaccinations before was also left unanswered. This also has public health concerns for them, and those they will come in contact with, as they will be scattered to the wind.
Living in this encampment, the folks have formed a community there. They self rule, help each other, and have a sense of autonomy. The options given take away all of this, which makes those offers unpalatable to most. So, they will have all their possessions taken away, their tents, and ramshackles no longer to offer protection from the elements, cast to an uncertain existence elsewhere, and most likely a hostile place, given City folks don’t want them in their parks, and living behind their homes, in bushes.
The slag pile is completely surrounded by protected habitat, owned and managed by The Nature Conservancy, for two endangered birds, and undeveloped habitat that many species have thrived. The nesting grounds for these birds is on City owned Ormond Beach. The presence of the homeless has had a negative impact on the mission of protecting these, and other species, with trash, and traffic through fragile eco-system land. Kat Selm, director of this project, has walked a tightrope to fulfill TNC mission, and find compassion, and recognition of the human condition of the neighboring homeless. She provided a dumpster on McWane Street for trash for several months. The City made this difficult, and she had to stop funding this service for the homeless. She allowed a family to remain illegally encamped on TNC property, a month past what the City wanted them to remain, as there were three children in this family. They were evicted Dec. 1st. They now live a few yards away, in their van, on the street.
When the eviction happens, some will go directly onto TNC property to encamp there, some to the river bottom, some to Oxnard neighborhoods, and others to Ventura, and surrounding cities. Very, very few will accept the very limited offerings of the vouchers, given the conditions and requirements necessary to enter, and the restrictions on their movements once in this very temporary shelter. The protected habitat will be further endangered by this ill conceived plan. The negative impact on the mental and physical stability of the homeless will create further barriers to them getting into programs, and ultimately gaining permanent shelter. The businesses and residents where the homeless will go will also be negatively impacted.
The opinions, and ideas of the homeless were not included in the decision making process. If they are not respected, and included in this process, then the chances of acceptance of the alternatives offered, and buying into trusting the government is virtually non-existent.
The owners of the slag pile are unresponsive, and not the ones insisting on this eviction. The slag pile itself is not a suitable place for human habitation. The health risks are mainly from the aluminum and magnesium dust inhaled and ingested. I spoke at length with the EPA manager of the Super Fund site. He could not give me diagnosis of potential illnesses that could result from contact with the slag pile. He said short term visits have minimal risk. Longer term exposure the risk goes up. I read both EPA reports. I have shared the risks, and findings with the homeless there, and precautions to take. As undesirable as this location is, the City has not offered another location, or option that is equal or better.
My recommendation remains a tiny home village, on City owned property, overseen by a non-profit or faith-based organization. This is cost effective, provides shelter, and stability, some autonomy, and self-governance, and services and programs can be offered to place these folks onto the path of re-entering society, in their own residences, and work. These are my thoughts and concerns on this plan, which is now official, by the City Council vote. I pray for the health and safety of these less fortunate persons. I will continue to address the basic human needs of those less fortunate in our community, rights that are considered human rights of international refugees. 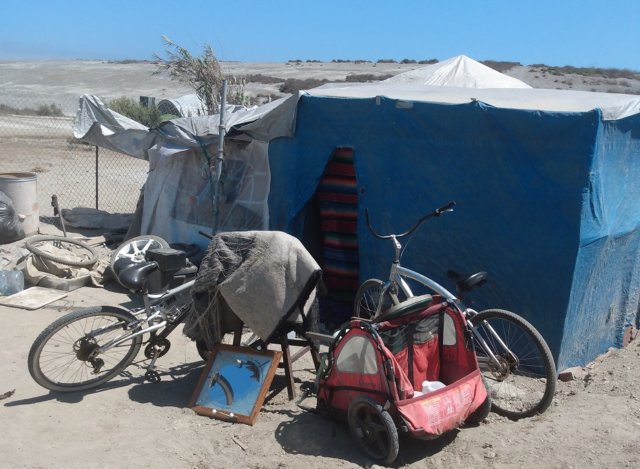 The City should provide shelter and psychological help to all those less fortunate people, the city owns so many buildings that are unoccupied, like the high school building on fifth street, they can let all the homeless people live there and provide them the medical help they need, and train them to get a job so they can be self sufficient.

Excuse me? My sister’s one of those less fortunate individuals, I visit and see no harm doing people. I see survivors with less than what most are blessed with. Jobs, a warm home, support. This pandemic already is affecting everyone and I pay my taxes for the city to raise rent every damn year?
Sounds like a plot to flush out Oxnard residents who have lived here all of their lives, and trying to flush out the people who didn’t meet their own personal”preferences”. They are trying to make this beautiful city that we knew into a destination for the wealthy (above all social classes), to move on in and make the city colonized.

West Side Storytellers
Reply to  Kat

Hey Kat, we are working on a documentary that involves Halaco and the community there. Would you be able to get in touch with us?

Several of us in our community have repeatedly offered theses type of remedies and more, but to no avail. The marginalized are usually considered non essential by many “City officials” They have touted progress on many fronts, but only do what is absolutely necessary. A homeless advocate needs to be on ALL city councils to advance more viable remedies. When people of need are separated from society’s, crime rises, calls for service rise, and so on. Until laws are changed, not to punish, but to make clear that this behavior will ni longer be tolerated. Until this happens, not much will change…

Oxnard local
Why not use the money to prepare another site that would be more long term. I met many of the people in the camp when they used to be camped on the beach near Port Hueneme.They are not near the nesting sites now.They are on the other side of the pools.Many of them have mental disorders and need help not evicting.It is a scandal that people who should be in sheltered group homes are being shifted around all over the place

Great article, and thank you for your compassion on this issue.

The ideal situation for the 1500 or so V.C. homeless that are sleeping outside is a compound, a “FEMA camp”- style collection of buildings where an individual can progress from building to building and finally be offered housing when it becomes available.

All of that, including the final housing solution, will only be accomplished through the private sector. The fact that none of us are ever consulted on any of these decisions only further makes that point.

Thank you again, and the above solution will be developed throughout this year, in the hopes that by next winter, we will have at least some shelter for all.

This ongoing cruel and horrific situation has to end, and will.

Why does it cost so much to remove them? They need to have a place for them and not scatter them all over the neighborhoods. Oxnard has enough problems.

This is insane moving people evicting them during a pandemic ! The birds that live there are more important then human beings ? The hundreds of thousands dollars that have been approved to remove them and give them vouchers that won’t last long , Im sorry this women that is in charge of the endanger birds needs to get her head out of the clouds think of the people ! They don’t choose to live there there are limited options ! Take the money build tiny homes these are people that need help ,also take it down waste the money and these homeless people will just come back ! City of Oxnard city of ventura help
The people !