Coming to America: Cambodia, The Next Generation

Introduction: Last week, we published an interview with Vanchat Toch, father of this week’s subject, Mony Toch.  This week, we will explore the generational impact the Khmer Rouge has had on families. I have known Olivia Roeun (now Toch) and Mony Toch, Vanchhat’s son, for over 16 years. They operate a small business in my area. These are hardworking Americans who I have known to work 364 days a year for many years, frequently putting in 12–16-hour days to provide a better life for their family. Just as his dad did escaping Cambodia for his family years earlier. I recall when they decided to extend the one day off on Jan 1 to three days so they could get some rest and share time with their children. I have always been taken by their work ethic compared to many Americans born here. That work ethic very much reminded me of my mother. I shared that information in letters with family and friends. Mony was the young child taken from his family at 5 years of age to work in Communist Chinese labor camps. On their escape to the Thai refugee camps, Mony was barefoot. They stayed in the Camps for 3 years and 8 months. Olivia is younger and her story is different yet her mom experienced many similar atrocities and fears. These are their stories.

Mony Toch is the third child of Vanchhat in Installment 1

Roos: Mony please tell me about your life in Cambodia, your escape with your dad and coming to America.

“I was born in Cambodia in 1970. When I was 5 years old, I was taken from my parents along with my brothers and sisters to work in rice paddies to provide money for the Communists. I stayed in a Camp located at near the fields did not see our parents. We ate wet rice with some long leafy vegetable that grew in the rice paddies every day. We drank dirty water.

“My Dad was in the Cambodian military and he knew what was happening. His brother had already been disappeared. We kids didn’t know exactly but we knew things had changed and it was very wrong. My dad split the family up as people were being kidnapped and killed. All families did this so if someone was captured at least part of the family would hopefully survive.

We left the camp and walked through the jungle all night. We started first thing is the morning when it was still dark. We had to move in and off trail when we thought someone is coming. We would walk in the tracks of others before us to avoids the mine fields that had been placed by the Cambodian Communists and the Vietnamese Communists. I had no shoes. I walked all there barefoot. It was dry season so rains were not the problem, dried broken grass and stones were. Your feet get toug.”

I asked Mony if they carried any supplies: a back pack, jacket for rain or anything.

“No, we carried only what we had on our backs. I had on a T-shirt and cut off pants. We had no jackets and no such thing as rain gear for us. We carried a rice pot for cooking rice and a small rolled up rattan rug for sleeping. I had no shoes. I was given slippers at the Thai camp but thy wore out fast, then I was back to bare foot. Walking on bamboo cuts your feet up, but they toughen up.

“It was summer season when we left. It was very hot. There was no water and I remember being very thirsty. We had to travel at dawn and dusk not only because of the Communists but because of the heat.

“The UN had dug some wells and these were used to get water. When we got to the border camps along Cambodia/Thai border we saw many others. There was UN, Cambodian and Thai troops girding the border and the camps The Red Cross and UN brought in rice and dried fish from Thailand so we got some protein. WHO was there also. I remember that big WHO logo. USAID was there also but many of us assumed all was Americans. We didn’t know other European nations were there as well. They war all while so we dodn’t know. Photographers were mainly European, again we did not know who was helping us. All looked the same.

“I was given those slippers I told you about. We were given some clothes from Thailand. I was barefoot the entire time I was at the refugee camp. When leaving after 3 years and 8 months, I as given a pair of black shoes from China. When you showed me those pictures from Tuel Slung prison the hair on my arms stood up. I remember seeing those pictures and hearing about the museum. The Cambodia government wanted to shut it down but the people wouldn’t let them.

“From the refugee camp at the border, we were transported to Chong Khao Phlu and then to Chanthaburi and stayed there for 4-5 months. At these locations the Thai and other countries had built temporary houses for the refugees. Wells were dig by UN and often water trucks came in the pumped water to containers stored on the roofs. I remember the WHO logo on the water trucks also. There was a school where the kids could play games. From Chanthaburi we went to Bangkok and then were flown to the San Francisco in US. From San Francisco we were flown to LA where our sponsor was located in San Dimas. Our sponsor was my sisters in laws who had emigrated to the US prior to the war in 1972 or 73. My brother-in-law had come on a visa to train with the US Marines, Ur Ram. He was from a relatively rich family and could afford to be sent to US though military trained to go back to Cambodia and train their troops. He never went back to Cambodia and worked for NASA for many years.”

I asked Mony how he met his wife.

“Our mothers knew of each other and met in Pomona, California. They set us up on a blind data. It was not an arranged marriage. We had moved from San Dimas due to high cost of living there to Pomona which was less expensive to live.

“When I first arrived in US I did all sorts of odd jobs, from Nordstrom packaging department in Ontario to a medical assistant in Rosemead. I also worked security for a while.  I was in Fresno for 8 years and got into the baking business with my uncle in 1990 to 1991. It is good to develop a business in the U.S. Not true in Cambodia. 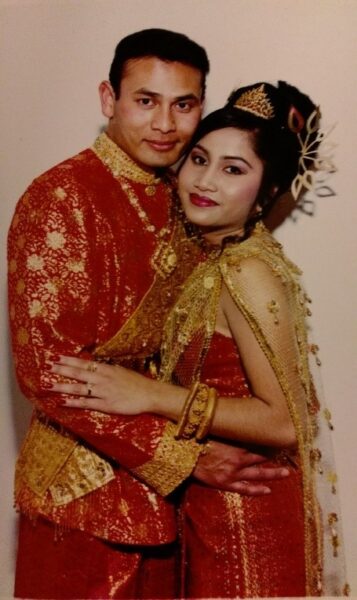 “I met my friend Emmeraud ‘Simon’ Sok at one of the refugee camps at the Thai border. We played as kids do. Simon had been through a lot and he was the type of kid who could stand up for himself. His wife Pavi, though from Cambodia they met in the States. Simon found Pavi on the streets living a starvation life in Los Angeles, California.

“Years later Mony and Simon met again in the US. Mony and his wife Oliva ended up purchasing Simon’s bakery.

“I was born at the border of Thailand and Cambodia. My Mom was Yeng Nhep. My Mom would not use my dad’s name Roeun back then as he had been executed and she was afraid what would happen to her. My Mom told me my dad was taken, blindfolded and executed. She was always in fear for her family so she kept no pictures or family records that could identify her with her husband. I was only 3 months old when my dad was killed.”

Do you know who killed him?

“The Khmer Rouge killed my dad. They were killing everybody. My Mom did not get to see him after he was taken away. They were separated and my mom went to Thai border as did many. After my dad was killed, two of my sisters died also primarily from illness and starvation. My oldest sister got married through an arranged marriage by the Pol Pot regime. That is common practice even today. These regimes decide who you will marry and how many children you can have.

“We were just there. I do not recall a lot. Just what my mom told me. I was born in the camp. Don’t know where or which camp. My brother is older by 13 years and we were all separated by age, not families. Everyone ran to the borders just trying to stay alive. The Vietnamese were also fighting the Khmer Rouge.

“My second sister, brother and Mom are in separate camps from each other. My oldest sisters my mom knows are already dead. Another older sister is already married off by the Khmer Rouge. They do this all the time for control. Who you will marry, who you can have a baby with? Mony’s aunt was also married off by the Khmer Rouge. It sickens me to think about. All the control, that is what they want. If you found a potato in the forest and you ate it and were caught, you would be killed for not sharing it.

“I am amazed that people in the US do not realize how blessed they are. People who live in third world countries would trade places with you Americans in a heartbeat. I am forever grateful and feel very blessed to be an American citizen. America is not perfect but America is the best country in the world. Let’s keep America from socialism and communism. My family left Cambodia for this very reason. Please don’t bring socialism and communism to America. Those of you who want to tear down America have not had experiences like mine or my family and you pass judgment and tell others how they should live and what type of world they should want to live in. They sound like the people we escaped from.”

In these two interviews, MonyToch and Olivia Roeun describe their struggles with communist repression in Cambodia that eventually brought them to America. They plead with our complacent citizens to actively avoid socialism and communism and to appreciate our country’s gifts of freedom, resources and opportunity.