Their 1619 Project would eviscerate, denigrate and replace American history with racist lies

Leftists have launched what they hope can be their final assault on America. Their goal is to obliterate everything good that America ever did or aspired to achieve, erase its citizens’ memories, and sow the seeds for future generations to revile and reject everything that is decent and noble in our country.

They intend to fundamentally change America’s historical narrative away from events and circumstances that made our country the world’s beacon of hope for freedom and representative government. They intend to replace well-documented reality with a false narrative of America being the scourge of the world, based on its enslaving and stealing from minorities to enrich and aggrandize white ruling elites.

Their plan is called the “1619 Project,” an alternative history curriculum for American elementary and secondary students. It was announced in July 2019 with a series of front-page stories in the New York Times, and other major newspapers, explaining its content and the need to:

“reframe the country’s history, understanding 1619 as our true founding, and placing the consequences of slavery and the contributions of black Americans at the very center of the story we tell ourselves about who we are.”

The 1619 premise is: “Our democracy’s founding ideals were false when they were written.”  Everything that happened in American history flows from the “original sin” of slavery. Every concept, document and institution that shapes and guides America was actually designed to promote slavery and therefore must be eradicated to atone for centuries of racial oppression.

1619 proponents declare that we must “make amends” for America’s crimes against humanity by eliminating monuments, the Electoral College, the Senate, Supreme Court justices, the Constitution, the Bill of Rights, federalism, capitalism, and all vestiges of white history and culture. Even hard work, objective thinking, the scientific method, self-reliance, being polite and two-parent families are the product of racism and “white dominant culture,” according to a document that has since been removed from the Smithsonian’s National Museum of African American History and Culture.

The 1619 Project is partnering with those who deem the American Flag, Pledge of Allegiance and National Anthem as offensive vestiges of racism, slavery and white privilege.

We could ignore the 1619 Project if it were simply the ravings of a coddled leftist professor in some Ivy League sinecure. But it is not, or at least it is no longer.

The New York Times leads an array of news media, academic, think tank and public officials who see the 1619 Project as the final solution for turning America against itself. Once they indoctrinate the current generation of elementary and secondary school students with (even greater) hatred for America, drowning out and canceling dissenting voices with charges of racism and white privilege, they will have free rein to establish a permanent totalitarian socialist state.

The 1619 Project was embraced by Speaker Nancy Pelosi, when she led members of the Congressional Black Caucus to Ghana during the August Recess. They wanted the 1619 narrative of the first African slaves arriving at Jamestown to upstage commemorations of the first session of an elected government at Jamestown. To succeed, the 1619 Project must ignore mountains of facts, and fabricate mountains of lies.

The centerpiece of the 1619 Project is the false claim that slavery was a uniquely American crime, infecting everything and everybody it touched to the present day.

In reality, the capture and enslavement of defeated foes and “inferior” people is as old as humankind. Slavery was integral to establishing regional dominance for the Egyptian Pharaohs, Muslim Emirs, Roman Emperors and countless other rulers. The Western Hemisphere’s great civilizations of the Mayans, Incas and Aztecs enslaved their subjugated people for labor and ritual sacrifice.

African rulers trading their slaves to Muslims or other Africans, and then to Europeans, was born from improved sailing technologies and the need for cheap, forced labor. The 1619 Project ignores the fact that only 9.7% of the Atlantic slave trade involved England’s North American colonies; 90.3% of African slaves were shipped to South America and the Caribbean.

The 1619 Project ignores that while 12 million West Africans were shipped by Europeans to the Americas, over 17 million East Africans were shipped by Arabs into the Middle East. The 1619 Project ignores the fact that the American colonies began banning slave importation in 1778, during the Revolutionary War, leading to a formal (largely ignored) ban for the entire United States in 1794.

England did not ban slavery in its colonies until 1807. Meanwhile, the Arab slave trade in East Africa was not eradicated until England destroyed the last slave forts in Zanzibar in 1909. Slavery remains active, if officially banned, in much of the Arab world today – as well as in parts of Africa, in the Chinese and Russian penal systems, and in China-run mines in Congo, where 40,000 children labor for $1-2 a day.

The year 1619 is important, not because slaves arrived in the new world, but because for the first time in the Western Hemisphere, a free people elected representatives to govern and be held accountable in subsequent elections. This was the first step to America becoming the most exceptional civic culture in world history. That is the true 1619 lesson that leftists want to expunge.

The Left and New York Times would also have us believe that black Americans are in lockstep with Nikole Hanna-Jones and other authors of the divisive, revisionist 1619 pseudo-history. The claim helps drive their anti-American agenda. But it is false. .

Many African Americans have battled 1619 fabrications and assertions, while black American thought leaders have eviscerated it – including civil rights leader Robert Woodson, who founded the 1776 Project to combat 1619 falsehoods, because he objects to assertions that the “shadow of slavery and Jim Crow” hangs over the destiny of Black Americans. “Nothing is more lethal,” he says, “than to convey to people that they have an exemption from personal responsibility.”

Wall Street Journal editorial board member Jason Riley notes that the NY Times 1619 scheme is also a foundation of “critical race theory,” which insists that problems within the black community are the fault of whites and the responsibility of whites to solve. It is now being taught in colleges, high schools, middle schools and even elementary schools across the USA – and in companies and government agencies via “diversity” and “racial sensitivity” sessions, where “diversity consultants” tell attendees the US is inherently racist and “virtually all white people” contribute to or benefit from racism.

Other vocal black critics of the 1619 Project and its adherents include political commentators Armstrong Williams and Candace Owens. Incredibly, notes columnist Deroy Murdock, the NY Times own family history is “rife with slavery, Confederate boosterism, and enforcement of Jim Crow segregation.”

Sadly and outrageously, all too many academics, Democrats, race hustlers and even some Republicans are vigorously advancing destructive 1619 ideas. Others are too intimidated to speak out against them, out of fear that they will be ridiculed, fired, canceled, harassed online or in restaurants, even beaten or killed.

Americans must do all they can to stop the 1619 Project and stand-up for the greatest nation on earth, before it’s too late. Bob Woodson’s 1776 Project is a good start. Let’s build on it, starting right now.

Scot Faulkner is the former Chief Administrative Officer of the U.S. House of Representatives and author of the bestselling political memoir, “Naked Emperors.” 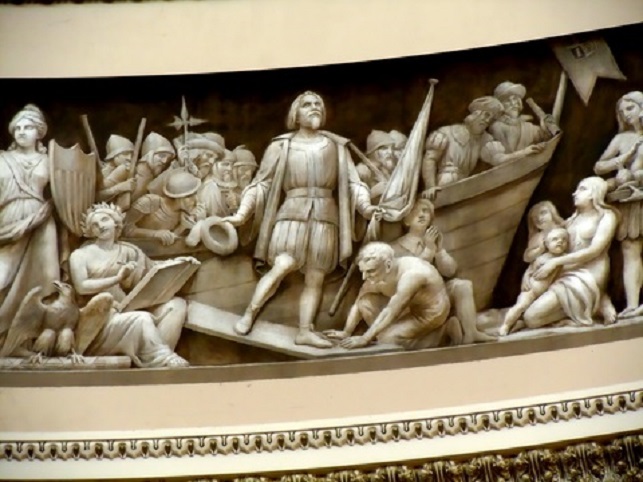 This article represents everything wrong with conservatism. Slavery is wrong, full stop. We all know it was common historically, but what we don’t need is a slavery apologist. Saying “but the Middle East was worse”, or that slavery in the usa wasn’t so bad since less than 10% of slaves globally were imported here, is standing in defense of slavery.

This article is reprehensible.