President Joe Biden’s executive order on Friday, April 9th creating the Presidential Commission on the Supreme Court of the United States is nothing more than an attempt to eliminate the third co-equal branch of government and assume total control/power over the nation and is “payback” for President Donald J. Trump’s appointment of three conservative constitutional justices to the Supreme Court: Neil Gorsuch (April 10, 2017); Brett Kavanaugh (Oct 6, 2018); and Amy Coney Barrett (Oct. 27, 2020).

The 36-member commission is co-chaired by Bob Bauer (who led the Biden campaign’s legal strategy) and Cristina Rodriguez (a Yale Law School professor and former deputy assistant attorney general) with most commissioners serving are professors and not practicing attorneys, or judges. The new commission has the charge to: examine the length of service and turnover of justices on the court, its membership and size (court packing), and the court’s case selection (rules and practices).

The above-mentioned topics are determined by the Constitution or by the Supreme Court itself (case selection) and only the size of the court is guided by action taken by the Legislative Branch. This executive order is as ludicrous as if the Supreme Court created a commission to investigate the Executive Branch concerning terms of office the President could serve and the executive power of the President (which like the U.S. Supreme Court is outlined in the U.S. Constitution).

President Franklin Roosevelt attempted to increase the size of the U.S. Supreme Court to 15 in 1937 when his New Deal proposals were being stopped by the current Supreme Court. His attempts to create a 15-member court were then blocked by members of his own Democrat party as a “bad idea” that would backfire.  However, President Roosevelt did achieve a partial victory when the U.S. Supreme Court began to rule in favor of his New Deal proposals which were being litigated.

It is interesting to note that both Justice Ruth Ginsburg (served from Aug. 5 1993 but died in September, 2020) and Justice Stephen Breyer (has served from August 3, 1994) though appointed by Democrat President Bill Clinton both were strongly against court packing—appointing additional members to the U.S. Supreme Court.  The number of nine justices has been in effect since the Judiciary Act of 1869.  In fact, Justice Breyer (the oldest Supreme Court Justice) has said that “the reputation of the Supreme Court is based on trust” of this institution which will be “undermined” by such action.

Ironically, before becoming President, Senator Joe Biden in 1983 had expressed that he was “not a fan of court packing” and that court packing “was a bone-headed idea and a terrible mistake to make and it put in question the independence of the most significant body in this country—the U.S Supreme Court.” However, during the 2020 campaign the former Vice President said he would not give his opinion on the issue and voters would have to “wait and see” because to do otherwise “would play in the hands of President Trump.”

Now it is obvious that President Joe Biden wants to remove any impediments that the conservative Supreme Court would keep him from moving forward on his socialistic/progressive policies.

It is unlikely that the March 2019 constitutional amendment made by Florida Senator Marco Rubio to limit the U.S. Supreme Court to nine justices will gain the traction necessary to limit the politicalization of the highest court in America.  (Note: To see the March 25, 2019 press release announcing this constitutional amendment go to: https://www.rubio.senate.gov/public/index.cfm/2019/3/rubio-colleagues-introduce-constitutional-amendment-to-keep-scotus-at-nine-justices.)

(Note: To hear more about President Biden’s attempt to change the U.S. Supreme Court go to the April 12 broadcast of the American Center for Law and Justice:https://aclj.org/supreme-court/by-executive-order-biden-creates-court-packing-commission.) 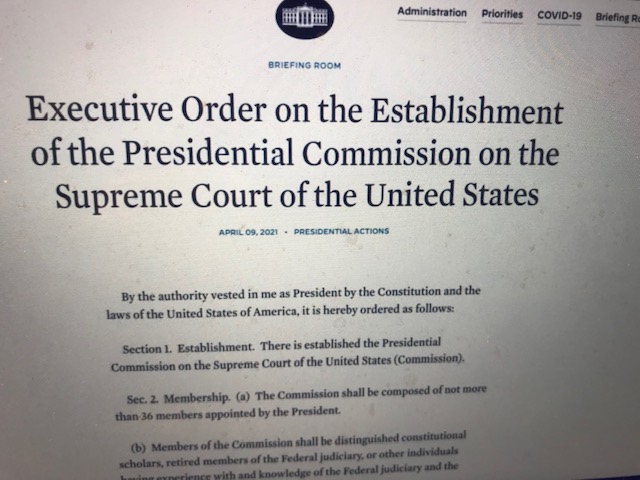