WILMINGTON, DELAWARE—Pro-life activist Randall Terry (Founder of Operation Rescue and the Society for Truth and Justice) and Catholic members of the “Stop Biden Express” went to Bishop W. Francis Malooly’s (the bishop of Joe Biden) house Oct. 2 to proclaim their message.

Confronting Bishop Malooly: “Killing babies! You haven’t rebuked Biden or held him accountable at any level. Public scandal requires a public rebuke. You can have him defeated if you said it was a sin to vote for someone promoting baby killing. They want us to pay for it with our tax money.”

“Our message to Bishop Malooly is very simple, ‘Do your job. Do you job, as a bishop.’ Publicly state that Biden should not be receiving communion because he is in direct opposition to the teaching of the Catholic Church in regarding the murder of babies.

“Then, warn the faithful it is a sin to vote for someone like Biden who has told you that if he is elected; he will kill babies; and he will use your money to pay for it.

“The home of an innocent child is his or her mother’s womb. That home with Biden’s approval; at his direction; with his promise for the rest of us to pay for it, that home of the baby is being violated violently as those children are ripped apart limb from limb.

“Sixty million children are dead and the bishops of this country by at-large (there is a handful of exceptions, thank you God) are in a conspiracy of silence. They are not telling the truth and they know the truth.

“Is it from fear or from the wanting of government money. Is it from the desire to have rich Democrats who are in their dioceses continue to support them financially. I don’t know. It really doesn’t matter.

“Their motivation, whatever is crippling them, whatever has disemboweled them, castrated them. Whatever it is; that is not the issue. The issue is that they need to repent; throw off the shackles and do their duty as shepherds. Protect the sheep and stop protecting and defending wolves.

“If a Shepherd will not protect the sheep from the wolves, he is a hireling and a coward, he is unfit to serve and should resign.”

(Editor’s Note: To see the video go to: https://www.youtube.com/watch?v=DEWp2PZjcuw.)

Terry Randall and the “Stop Biden Express” will stage a protest Oct. 7 at 1:30 p.m.  at the residence (171 Clifton Avenue) of Cardinal Joseph Tobin in Newark, New Jersey because of his Sept. 15 endorsement of Joe Biden during an online Catholic symposium regarding Catholic Voting.

Cardinal Tobin who supports homosexuality and transgenderism said: “I think that a person in good conscience could vote for Mr. Biden. I, frankly in my own way of thinking, have a more difficult time with the other option.” (Editor’s Note: To see what Cardinal Tobin said go to Life Site News Sept. 16 article: https://www.lifesitenews.com/news/pro-lgbt-us-cardinal-catholics-in-good-conscience-can-vote-for-radical-pro-abortion-biden?utm_source=YT.) 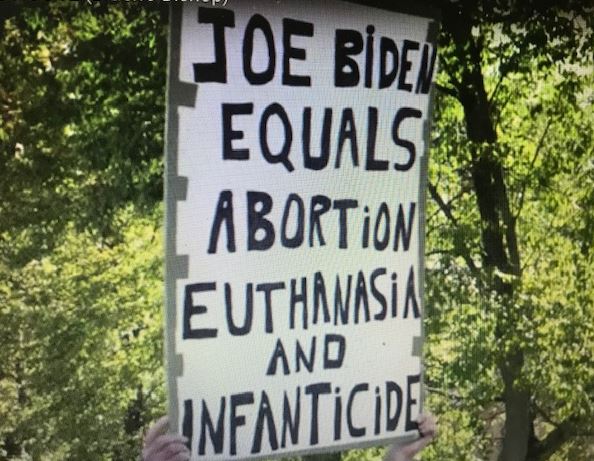