Conejo Players Theatre, the longest-running community theatre in the Conejo Valley, is thrilled to present its 2020 Season – featuring an incredible 9 shows, …there’s something fun for everyone!

Join us for memorable musical adventures as we present: 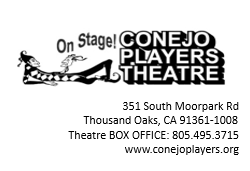 Conejo Players Theatre has been a stalwart arts organization in Thousand Oaks for six memorable decades, and one of the city’s foremost “hidden gems.” It all began in 1958 with a “Let’s start a theatre!” attitude; a meager treasury; and a handful of talented and willing volunteers to build a stage in a barn and put on shows. To this day, CPT is an all-volunteer organization — serving more than 13,000 patrons, from the Conejo Valley and beyond, each season.
Look for more information on other notable CPT events – including our annual awards dinner gala – as the new year dawns. And don’t forget to visit our website, at ConejoPlayers.org, for info on our affordable 2020 Season Ticket packages.

You Can’t Take it With You – Sweet-natured Alice Sycamore falls for banker’s son Tony Kirby, but when she invites her snooty prospective in-laws to dinner to give their blessing to the marriage, Alice’s peculiar extended family — including philosophical grandfather Martin Vanderhof, hapless fledgling ballerina sister Essie, and fireworks enthusiast father, Paul — might be too eccentric for the staid Kirbys.

The Producers – Down and out producer Max Bialystock, who was once the toast of Broadway, trades sexual favors with old ladies for cash contributions. Max’s new accountant, Leo Bloom offhandedly muses that if Max found investors for a new production that turned into a flop, he could legally keep all the extra money. The duo begins to put together the worst play possible, titled “Springtime for Hitler”, with a terrible director and a hippie-freak star. The most Tony Awards ever received by a single production in 2001 with 12 awards, including Best Musical.

Harvey – Elwood P. Dowd insists on including his friend Harvey in all his sister Veta’s social gatherings. Trouble is, Harvey is an imaginary six-and-a-half-foot-tall rabbit.

Bye Bye Birdie –  the year is 1958, and the much-adored rock-and-roll idol — Conrad Birdie — has been drafted into the US army. His songwriter and agent, Albert, and Albert’s secretary and some-time girlfriend, Rosie, hatch a plan for a farewell performance to take place on The Ed Sullivan Show.

The Curious Incident of the Dog in the Night-Time – 15-year-old Christopher has an extraordinary brain. He is determined to solve the mystery of who murdered his neighbor’s dog, Wellington. But his detective work, forbidden by his father, takes him on a thrilling journey that upturns his world. Rated R for language.

9 to 5 – Pushed to the boiling point, three female coworkers concoct a plan to get even with the sexist, egotistical, lying, hypocritical bigot they call their boss. In a hilarious turn of events, Violet, Judy and Doralee live out their wildest fantasy – giving their boss the boot! While Hart remains “otherwise engaged,” the women give their workplace a dream makeover, taking control of the company that had always kept them down. Hey, a girl can scheme, can’t she?