By Debra Tash and Michael Hernandez

The chamber was packed at Simi Valley Council’s contentious July 29th 2019 meeting.  A councilmember’s controversial video brought out supporters as well as opposition.  The discussion was not on the agenda and speakers were held to the public comments section of the meeting.  The opinions expressed by the over fifty people who spoke were nearly evenly divided.  Another seventy five turned in cards but did not openly voice their views on Ms. Luevanos’ video.

An overflowing Simi Valley City Hall Council Chambers (with 70 more watching City Council proceedings in the Simi Valley Library Community Room) had a strong police presence with nine Simi Valley officers (seven officers flanking City Council members and two more in the back of the Council Chambers) along with at least five police officers in front of City Hall after Councilwoman Ruth Luevanos reported receiving death threats for her 3 minutes and 38 second video posted on her City Council member Facebook page July 13 that warned immigrants of the Immigration and Customs Enforcement agents round up of more than 2,100 immigrants nationwide with deportation orders. She said she made the video “to inform people of their rights.” 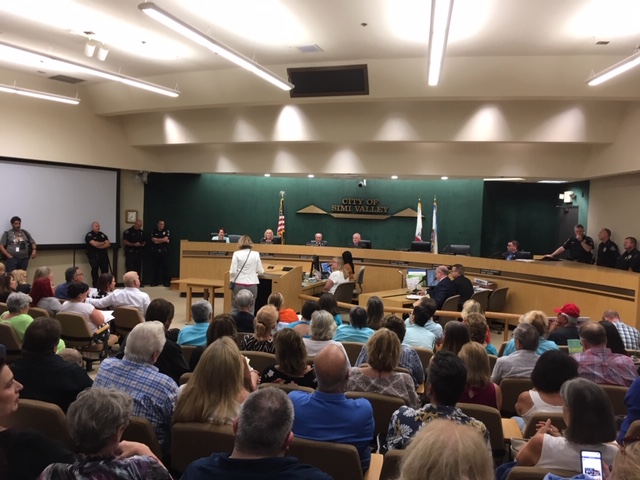 In that July 13th video posted on Ruth Luevanos’ Facebook page the Simi Valley Councilmember also expressed her concern for illegal immigrants held in border detention camps.  With a backdrop of an altered United States flag, with the stars visible and the stripes in the colors of Mexico, Luevanos spoke about “concentration camps” with unsanitary conditions and detainees drinking out of toilets.  She called the ICE raids, which were upcoming at the time of the video’s release, a political stunt to help reelect President Trump.  The video was in English with subtitles in Spanish.  And the post’s caption read: “SB54 California Family Values Act is still the law in California according to the 9th Circuit Court of Appeals.”

On June 26th 2018 the council, which Ms. Luevanos was not a member at the time, voted to uphold it’s April 2018 opposition vote to SB 54.  Ms. Luevanos’ fourteen year old son, Joseph, garnered national media attention when a young activist, Alan Vargas, photographed him talking with an attendee who supported the council’s anti SB54 position.  The derogatory caption on the Twitter post went viral.  SB 54 throws up numerous obstacles to state and local law enforcement cooperation with federal immigration authorities in dealing with illegal aliens.

After the public comments at the July 29th 2019 meeting each councilmember addressed those remaining in the chamber who had toughed out the five and half hours slough.  Ms. Luevanos went first, thanking her supporters and stating that as a law student she had advocated for asylum seekers.  She claimed they were being held, at the time, for over nine years in San Pedro. Councilmember Elaine Litster, who has five children, two of which are adopted and Hispanic, called what Ms. Luevanos had said in the video divisive and a breach of ethics.

Ms. Luevanos holds a law degree from Loyola and has worked as a K to 12 teacher.  She ran for office in 2018 with a slate of Progressive candidates and was the only one to win a seat on the council.

Several residents (some from the progressive activist group Indivisible and other supporters of Councilwoman Ruth Luevanos) showed up to the Simi Valley July 29th City Council meeting to demonstrate their support. 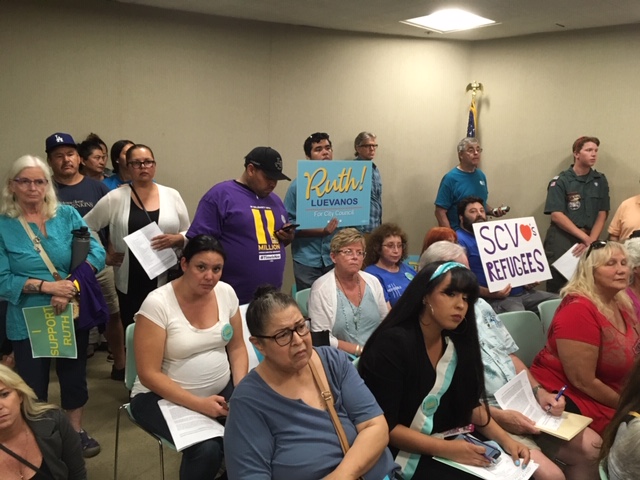 with all the people there to speak out as to a senior housing project ( people want to cry and complain about a developed building a senior living community) those people on that prior agenda item took hrs. I stayed til almost 9PM 3 hrs of people claiming building t a senior community is ‘horrific” was all I could take.
Councilmember Ruth stated in her video that people held at the border are held in ‘concentration camps”. She knows that real concentration camps are what the Jews were put into and exterminated in. She knows and dismiss that human tragedy of the holocaust by lying as to Illegal aliens trying to enter the USA! These people are Communist props; they must be fought and defeated, recall her now! Watch her video, this is what she is!

Meet All The Hands That Feed You