The webinar on January 27, 2021 hosted by the AAPS answered that question based on in-the-field work by their network of doctors worldwide. Here is a link to the overview of their work and some of the participants: Paper Early Ambulatory Treatment

The webinar was entitled Pathophysiologic Basis and Clinical Rationale for Early Ambulatory Treatment of COVID-19 and can be seen at this url: Webinar

It was noted in the greeting by Jeremy Snavely, business manager AAPS in Tucson, that the AMA had dropped temporarily the issuing of CME credits by AAPS for their webinars, which should not be a reflection on the outstanding work of the participating physicians.

Dr. Jane Orient, Executive Director of the AAPS, who has testified in congress, said in her overview that the AMA suffers from medical nihilism. She informed the audience that the event was originally planned to be held at a major medical center and was canceled by an infectious disease doctor. She also noted that she hears doctors say that they cannot get consultation with infectious disease doctors. The information learned over the course of the last few months and presented by the doctors in the field has been gained through patient treatment and studies funded by private groups. Because autopsies are not done anymore, this research has taken longer to uncover, but is no less significant.

The Time for Doctors to Step Up is Now

Keynote speaker, Dr. Peter McCullough opened by saying that if there is any time for doctors to step up, it is now in managing Covid patients. When Covid-19 hit, he turned all of his scholarship and efforts to this viral pandemic, he said. He showed a graph taken today from Worldometer which appeared to indicate that Covid had peaked and hospitalizations peaked on January 14, 2021 at 128,000. 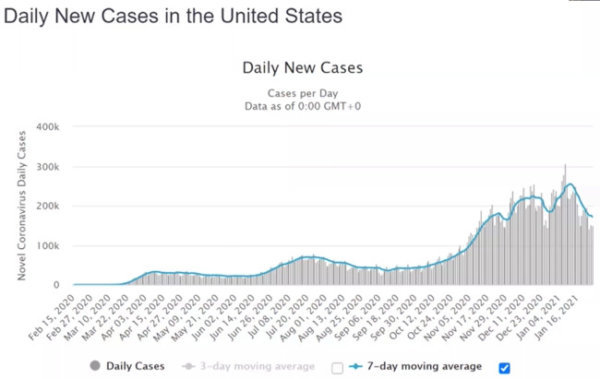 Deaths lag by about four weeks, but may be on the way down due to the institution of early treatment which is what his group has been advocating.

The Disease and Untreated Mortality Rate 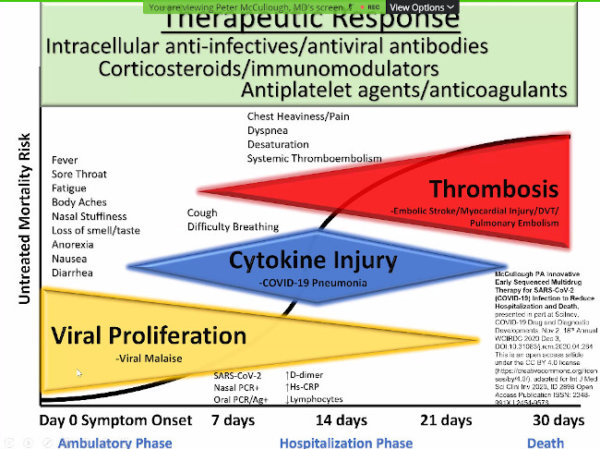 The disease progresses chronologically as the chart shows with symptoms potentially leading to death. Dr. McCullough said that the mortality rate of hospitalized patients was 25%. Operation Warp Speed, he said, concentrated on the development of a vaccine, rather than early treatment. He noted that the PCR testing does not pick up the entire virus, so testing just infers that it is Sars Covid-2. The data does not support asymptomatic screening. The therapeutic response is three-pronged and listed at the top of the above image.

The ideas for outpatient care have been derived from the three-pronged approach listed in the image. With every serious viral infection, it takes more than one drug. There will never be a magic bullet to cure Covid-19. The proper approach, he said, is to put drugs together in combination like Hepatitis-C and HIV. This was part of his testimony to congress. 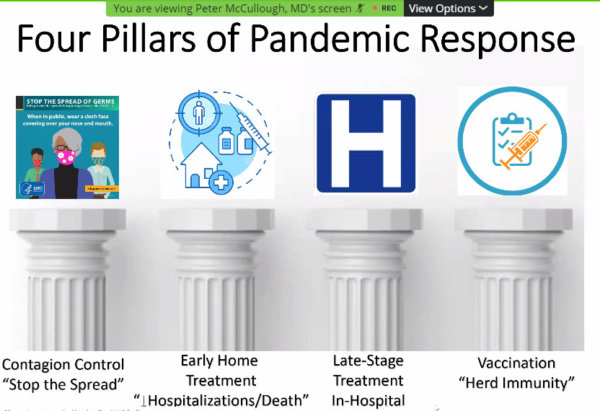 Unable to get his op-eds published, Dr. McCullough took to the Internet. Read this:
Americans Need Home Treatment

About the time of this editorial, the NIH pulled after only 20 patients its only trial of home treatment when it was announced that Covid was amenable to a vaccine. 20,000 person trials for vaccine, why not for early treatment, he asked.

Note this information was finally published in 2021. Read here

Dr. McCullough has used antibody treatment, now sitting on shelves, in the form of a neutralizing cocktail.

HCQ destructs the virus and its ability to travel, thus has shown viral replication reduction of up to 90%. HCQ is used worldwide, he said, but not in US, Canada, Australia, South Africa, UK, Spain and parts of South America, according to a chart he showed. HCQ is also used in conjunction with other drugs. Again, he wrote an op-ed in The Hill on the necessity of HCQ. Read here. Note that AAPS is suing the FDA on its arbitrary restrictions on the use of HCQ. Read here .

Ivermectin may affect the spike protein of the virus. Even small clinical tests showed 71% reduction in mortality, which is highly significant he said. In January 15, 2021, the NIH revised its statement on Ivermectin use from negative to neutral.

Favipiravir, an oral form of Remdesivir, has shown to inhibit the virus. Operation Warp Speed should have studied such treatments, he said. Read article here about Favipiravir.

JAMA (Journal American Medical Association) has published articles about the successful use of corticosteroids including a 30% reduction in mortality rate.

Another drug is Colchicine which has been documented by the Montreal Heart Institute as reducing hospitalization, mechanical ventilation and death.

Anticoagulants plus aspirin have shown a reduction in mortality and death, which is an approach used for fifty years, he said, to treat heart patients.

25 million people have been given positive PCR test results without instructions for treatment.

Imagine, he said, thousands of deaths which would have been prevented with immediate home treatment. 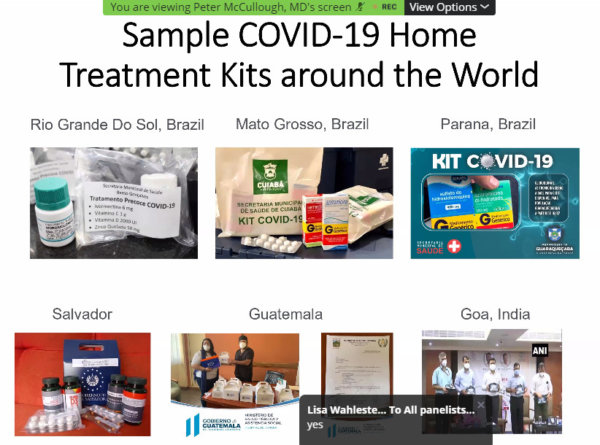 This part of the webinar was particularly insightful hearing from doctors in the field.

State Senator Bob Hall from Texas was on the webinar. He said that the Pharmacy Board in Texas was interfering with the physician-patient relationship and he was introducting legislation to prohibit such interference. After pressure, the board softened its stance, but legislation is still pending.

The entire webinar is backed up on Rumble and can be viewed here.

For information on the author, click sheryl hamlin dot com

And more innovation from Banner Health…

For health leaders in Arizona, infusions of monoclonal antibodies are not just a way of impeding the progression of illness in patients with COVID-19, they are a way of keeping patients out of hospital beds at a time when resources are stretched. The federal government recently set up a monoclonal antibody infusion center at Tucson Medical Center, and Banner Health has established centers in Tucson and Phoenix.
https://www.azcentral.com/story/news/local/arizona-health/2021/01/29/arizona-covid-19-patients-avoiding-hospitalization-monoclonal-antibody-infusions-and-covid-at-home/6630809002/

…Vaccination of persons with known current SARS-CoV-2 infection should be deferred until the person has recovered from the acute illness (if the person had symptoms) and criteria have been met for them to discontinue isolation. This recommendation applies to persons who develop SARS-CoV-2 infection before receiving any vaccine doses as well as those who develop SARS-CoV-2 infection after the first dose but before receipt of the second dose….https://www.cdc.gov/vaccines/covid-19/info-by-product/clinical-considerations.html?CDC_AA_refVal=https%3A%2F%2Fwww.cdc.gov%2Fvaccines%2Fcovid-19%2Finfo-by-product%2Fpfizer%2Fclinical-considerations.html

A major part of the problem lies within testing and how the results are used, or not used. As seen in the graph, Dr. McCullough breaks the disease into three phases. In the first, the virus is replicating (proliferating). It is within this phase when the virus is susceptible to antivirals. On average the replication lasts 5 to 8 days but can extend out past 3 weeks. This phase dove tails into the cytokine storm where the body’s own immune systems are attacking itself and lasts about 3 weeks. This is followed by the third phase when the blood’s constituents and its vessel linings start, around day 7 on to break down. This causes small clots that bind together into bigger clots clogging up the circulatory system and depriving end organs of oxygen causing mass tissue destruction.

If we go back over this, at around a week after infection, the body is starting to need some serious help. Unfortunately, that help may not come until the patient is in some highly dangerous territory. In part, this is the fault of the testing system. It is not unlikely to see test results coming back around two weeks. One then needs an appointment with one’s doctor who may or may not agree with early home treatment. But, treating the waning virus at some point will be giving antivirals to patients with very few to no active viruses and asking if antivirals have any effect against the cytokine storm or thrombosis.

In addition to the above, test results can be manipulated to make things look better. We need earlier test results which may mean a different type of test and we need an accurate appraisal of test results to track the disease. We have neither.