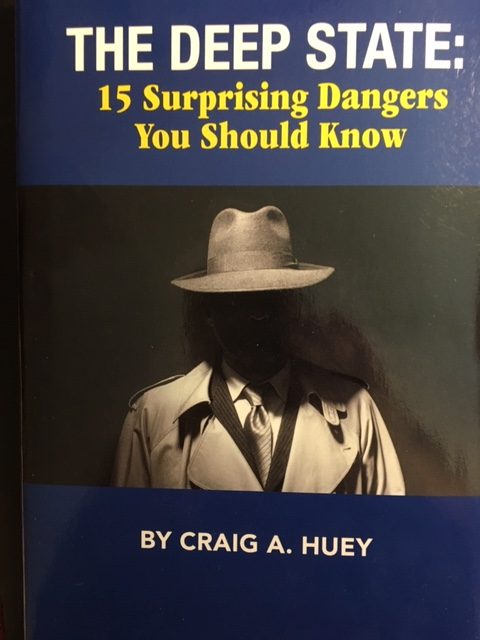 EL MONTE—“We are now at a crisis point in culture and politics,” said marketing expert and business owner Craig Huey at the Victory Elephant Breakfast at Goody’s Restaurant, 11357 Valley Blvd.   “How many were surprised how well they (Democrats) did in 2018?   Huey, author of the “The Deep State: 15 Surprising Dangers You Should Know,” “The Huey Report,” and the “California Voter Guide” said he came to speak on “How the Democrats won in 2018 (and) what Republicans need to do to win in 2020.”

“A crime wave is growing locally, statewide,” said Huey speaking on Saturday (Aug. 3) before the Gilroy, California, El Paso, Texas, and Dayton, Ohio mass shootings. “My wife and I are in trauma because of crime,” said Huey who recounted the story of his son robbed and shot five to six times by three gang members last year.  “Miraculously, he survived.

“President Obama transformed politics like never before,” said Huey, a 2012 candidate for the 66th California State Assembly race.  “Politics use to be about the candidate with the most money winning.  But President Obama changed that.  He fired the political consultants and got the best minds from Microsoft, Apple and high tech companies and then the most powerful marketing machine was created.  Republican consultants are asleep especially about ballot harvesting.  They are doing politics as if it was 15 years ago.

“The formula for winning an election today is:  Money plus data, plus targeted advance marketing, plus organized get out the vote, equals victory.

“Hillary takes all the consultants and all the digital people from President Obama using old fashioned marketing of 2012 and 2016 while Trump fired all the Republican consultants and hired a digital marketing guy from San Antonio, Texas—Brad Parscale—targeting churches and evangelical voters in key states. Hillary spends 1.4 billion and Trump spends 957 million dollars.

“In 2018, Indivisible—(left-wing political activists organized in local small groups)—caused the election tsunami (for Democrats) and got the election won.  In California (billionaire anti-Trump progressive hedge fund manager) Tom Steyer caused the blue tsunami by building a data base that built a movement and mobilized people to vote by building an army of volunteers.

“The Democrats were organized for ballot harvesting especially the next generation get out the voters.  They were able to get voters to sign a pledge that they would vote.   They organized a complete slate of candidates.   They got voters to the polls, giving them rides, and they collected ballots for voters (ballot harvesting).

“Republicans act as if it were 20 years ago.   If we don’t ballot harvest—Democrats will win again.   We lost seven key congressional districts in 2018 because of an army of 1,700 volunteers.  The Democrats got the voter turn-out, used data strategy, registered voters, and did ballot harvesting.  In 27 states (including California) it is legal with restrictions.

“Why aren’t we approaching  Republicans and conservatives who are not voting?  Evangelicals and Catholics who are not voting?   Are we going after these votes?  The socialists are!  They were able to gain six to 10 percent more votes through ballot harvesting.  This can change any election.  Two pastors in Corona should have won city council seats but they lost by ballot harvesting.

“How should we respond?   We are called to tell the truth in love; no matter the cost to ourselves; to sacrifice for freedom; to leave a powerful legacy behind.   If we donate, volunteer, and pray; we can be an instrument of change.”