To understand how utterly foolhardy and dangerous Assembly Bill 292 (AB 292) is, we need to understand that it concerns violent crimes and the apparent need for California legislators to release violent criminals back into society as soon as possible. 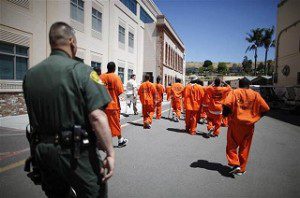 The major advantage of classifying a crime as “violent” rests in the penalties for these most serious criminal actions. Many violent crimes are considered life offenses, where the defendant receives either the death penalty, life without the possibility of parole, or life in prison with the possibility of parole, but only once the defendant has served a specified number of years in prison, depending on the crime he or she has committed. For those offenses where the violent perpetrator is not facing a life sentence, he does face a significantly higher prison sentence than for most other felonies. Additionally, he must serve most of the actual sentence before he can be paroled.

When a defendant is sentenced to prison for most crimes, he or she only really serves half of the original sentence. For example, if a defendant were sentenced to ten years for a non-violent felony, he would only have to serve five actual years before being released from prison.

However, for the violent criminal, that is not the case. Pursuant to Penal Code section 2933.1, the violent defendant must serve 85 percent of his actual sentence. Thus, if a defendant were sentenced to ten years in prison for committing a violent felony, he would not be released from prison until he had served approximately 8.5 years of his sentence. The end result is obvious: an extra 1.5 years where a victim can sleep more safely knowing that the person who harmed him or her will not be able to do so again.

All of this will end if the California Senate passes AB 292. Authored and introduced by District 29 Assemblymember Mark Stone, this bill will eliminate the 85 percent sentencing requirement for all violent felonies, replacing it with the 50 percent requirement currently reserved for all non-violent felonies. Thus, murderers, rapists and child molesters will not only be lumped into the same category as non-violent felons but will be released from prison significantly earlier.

If you go to Assemblymember Mark Stone’s website, you will read how proud he is of this legislation, bragging about his earned reputation as a leader for California’s most vulnerable residents. This must mean that Stone considers violent criminals some of the state’s most vulnerable citizens and worthy of his attention.

How did it all come to this? Why would any politician brag about helping murderers, rapists and child molesters?
Enter Proposition 57, the 2016 legislation mislabeled by California legislators and approved by voters under the misguided belief that this new law was actually making the public safer. In July, I published an article titled “California Leaders Mislead Public, Reduce Penalties for Crimes with Deceptively Named Propositions.” In that article, I discussed how California legislators deceived the public by misnaming this proposition to get it passed by voters. They created a false narrative about how Californians felt about criminal justice reform.

Assemblymember Stone is now citing the authority granted to the California Department of Corrections and Rehabilitation by Proposition 57, as well as his false belief that Californians want these violent offenders released back into the public early, as his reasons for authoring AB 292. It’s working. AB 292 has already sailed through the Assembly. Now it is just waiting for a final vote by the California Senate.

Inhuman crimes
If California citizens had any idea what crime a person needed to commit to be regarded as a violent criminal, they would take stronger notice of these drastic changes to state law. The most horrifying aspect of AB 292 is that California legislators do know what constitutes a violent crime, and yet they are falling over themselves to get these most terrible of criminal offenders back on the street to further victimize people everywhere.

Penal Code section 667.5(c) defines what sort of criminal activity qualifies as a violent felony. The list reads like a horror novel. First and foremost are murder and voluntary manslaughter. People convicted of these crimes have unlawfully taken the life of another human being. Attempted murderers are also considered violent, even though they failed in their efforts to kill. There is no mitigation for the wicked just because they were unsuccessful.

Next is mayhem, which is defined as when one human being unlawfully and maliciously deprives another human being of a body part, or disables, disfigures or renders a body part useless. Have I gotten your attention yet? The list only gets worse.
Also included is a series of violent sexual assault-related offenses against both adults and children that serve to not only harm their victims but likely damage them physically and emotionally for the remainder of their lives. These illicit crimes are defined by Penal Code sections 261, 262, 264, 264.1, 286, 287, 288 and 289.

There are several additional offenses where even though a victim did not die or suffer a horrendous sexual assault, the conduct is so awful that it frightens and offends any person who chooses to live his life peacefully. These acts include any felony where the subject inflicts significant or substantial physical injury on another, or the subject personally uses a firearm during the commission of their crime, as defined by Penal Code section 12022.5, subdivision (a), 12022.53, and 12022.55. Any person who uses or directly employs a weapon of mass destruction against another person or public natural resources, in violation of Penal Code sections 12308, 12309, 12310, and 11418, subdivisions (b) and (c), will also make the list. An arsonist who causes great bodily injury or sets fire to any inhabited structure, as defined by Penal Code section 451, subdivisions (a) and (b), will not escape being defined as a violent criminal under the law.

Finally, although some of the criminal acts may not necessarily result in great bodily injury or death, they are listed as violent felonies because only a violent act committed by the assailant will guarantee their success. These include robbery, residential burglary when the residents are home, kidnapping, carjacking, and assault upon another with the intent to commit mayhem, rape, sodomy, oral copulation or any violation of Penal Code sections 264.1, 288, or 289.

While gang members define themselves by the violent crimes they commit, special consideration is given when they intimidate a potential witness in a criminal case or extort another for the benefit of their criminal street gang, which is why these two crimes make the list.

Lastly, as a sort of catch-all, any felony that is either punished by death or imprisonment in state prison for life round out the list of violent criminal activities. These acts cover mostly murders and particularly violent sexual acts, but they also may include certain acts perpetrated by criminal street gang members that involve some of the crimes listed above as well as certain others when a firearm is discharged during the commission of a particular crime.

California legislators are doing serious, irreparable harm against citizens in the name of criminal justice reform. AB 292 is such a ghastly piece of legislation that no person of conscience would even consider voting for it. Unfortunately, that is not the world we live in right now. Only action by concerned citizens will stop California’s legislators from their continuous efforts to “reform” the criminal justice system to the detriment of their constituents.

If you do not want to see murderers, rapists and child molesters released years earlier into the public to victimize others, contact Ventura County state senators Monique Limon and Henry Stern. Let’s help them understand we are paying attention to their votes — especially on AB 292.

John Barrick has worked as a prosecutor in the Ventura County District Attorney’s Office for more than 16 years and has prosecuted some of the most violent crimes committed in the county. He currently serves in the Major Crimes-Homicide Unit. He is also a 2022 candidate for District Attorney.