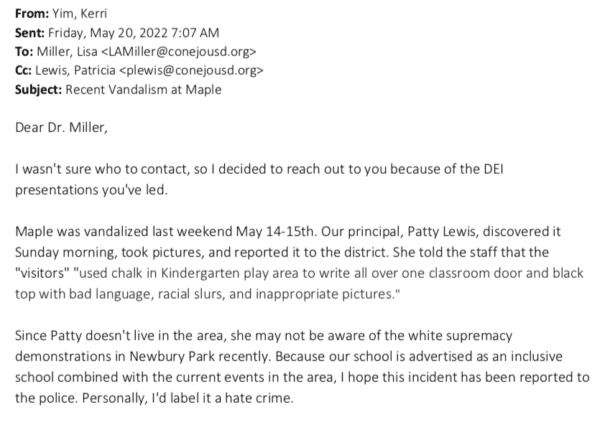 When The Conejo Guardian broke national news about a Newbury Park third-grade public schoolteacher subjecting her students to a pro-gender dysphoria video without informing parents, Mark McLaughlin, superintendent of the Conejo Valley Unified School District (CVUSD), was quick to smear the Guardian after a vandal painted the words “Pervs Wk Here” on the school wall.

But when the Guardian and others demanded more information about the vandalism, the district went silent. Now, emails obtained by a freedom of information act show that Maple Elementary was vandalized with racial slurs and other epithets in a separate incident ten days before the Guardian published its expose — a fact that school district leaders never made public, leading media outlets like CBS Los Angeles and the Acorn to associate The Conejo Guardian with the second instance of vandalism without acknowledging the first.

According to newly revealed emails, Maple Elementary was vandalized with racial slurs and “inappropriate pictures” on May 14-15, a full ten days before The Conejo Guardian broke a story about the introduction of mature sexuality into the third-grade classroom on May 25. Police responded to the May 15 incident, according to the Thousand Oaks Police Department.

On May 20, Maple fifth-grade teacher Kerri Yim emailed Lisa Miller, then-assistant superintendent of student services at the district, with the subject line: “Recent Vandalism at Maple.” The message read: “Dear Dr. Miller, I wasn’t sure who to contact, so I decided to reach out to you because of the DEI presentations you’ve led. Maple was vandalized last weekend May 14-15th. Our principal, Patty Lewis, discovered it Sunday morning, took pictures, and reported it to the district. She told the staff that the ‘visitors’ ‘used chalk in Kindergarten play area to write all over one classroom door and black top with bad language, racial slurs, and inappropriate pictures.’”

Yim continued, “I hope this incident has been reported to the police. Personally, I’d label it a hate crime.”

This email was sent 5 days before the Guardian published its story about Maple Elementary in print and online.

Internally, CVUSD assistant superintendent of instructional services Kenneth Loo forwarded the message to Mark McLaughlin and others on May 23, but none of them contacted Yim at Maple.

Receiving no response, Yim forwarded her own email to CVUSD board member Lauren Gill, the trustee representing Maple, and the local union representative on May 27, asking to know if the May 14-15 vandalism had been reported to the police. On that very day, a second act of vandalism was perpetrated at Maple and, within days, blamed on The Conejo Guardian by McLaughlin, board members and local and national media.

Without disclosing Maple’s history of vandalism, McLaughlin released a statement that read: “As many in our community are aware, on Friday, May 27, 2022, hateful speech was spray painted in giant red letters across the front of Maple Elementary School. This act of vandalism came on the heels of a factless written piece focused on Maple Elementary School (including a photo of the school, along with its school logo printed on the front cover) being dropped on the driveways of homes across Conejo Valley by a local monthly publication. There have been many pieces written in this unreliable source about Conejo Valley USD schools, members of the school board, and district employees that are completely erroneous, mislead readers, spew disinformation, and contain no journalistic or investigative integrity. I will not stay quiet any longer.”

He then continued, “To know this publication released a piece on Thursday, May 26, 2022, and to see the hate on display the following day, raises real concerns about this small group of individuals who do not represent the values and beliefs of our school district.”

Though he was aware of the May 14-15 vandalism, McLaughlin never made it public.

CBS Los Angeles reported on June 2: “A Ventura County elementary school was defaced with graffiti after a local newsletter criticized the school for affirming the gender of a transgender student and now local families and community leaders are fighting back. … Many people believe it was in response to an article that was published the day prior in The Conejo Guardian with the headline ‘Third-grade Teacher Promotes Gender Confusion in Classroom.’”

The Acorn chimed in with a story titled, “Superintendent points graffiti blame at publication,” written by former Acorn reporter Dawn Megli, a favorite of local teachers’ unions. Her article explicitly connected the Guardian to the second act of vandalism at Maple — without mentioning any prior vandalism at the school.

The Acorn’s Megli wrote, “Superintendent Mark McLaughlin responded to the graffiti on Memorial Day with a districtwide email that linked the act to an article published May 26 by the Conejo Guardian. … In his message, McLaughlin strongly criticized the Guardian without naming it, calling it an ‘unreliable source.’”

These internal emails were obtained by a request made on June 7, but the district attempted to delay their release until Nov. 30, after the school board election. Under pressure from The Conejo Guardian and others, they released some emails in late September. Still unanswered is how many other acts of vandalism have occurred at Maple in recent months and years.

So, Conejo Guardian is accused of …. reporting the truth– and then having it spun as something else and blamed for an event by MSM and mini-media (Acorn) which happened before the Guardian told the truth.

It would be humorous if large portions of the public didn’t believe the lies fed them by said media.

McLaughlin is a snake. His policies were endorsed when he was incredibly elevated to superintendent by a then Conservative school board.

Thankful that there are 2 media outlets (Citizens Journal VC and Conejo Guardian) which tell the truth in VC.