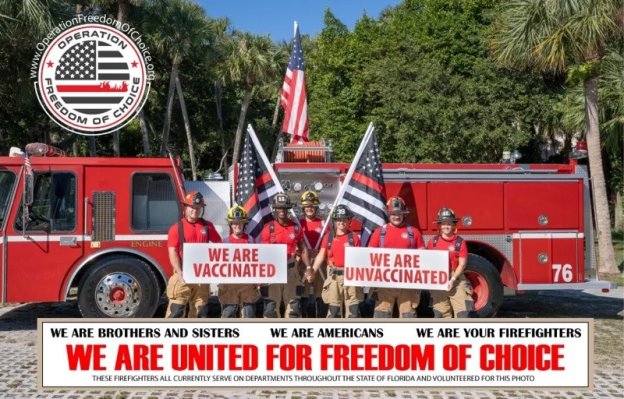 WASHINGTON, DC, January 18, 2022 – Thirteen-year-old Maddie de Garay, who is now bed-ridden immediately following her second vaccine shot during the Pfizer trial, will attend, and speak at the March to Defeat the Mandates.  A new ad out today accuses Pfizer of burying her injury to win FDA approval for the Pfizer vaccine for kids.

Maddie and her mother, Stephanie de Garay will join a growing number of organizations and individuals including 6000 federal workers, firefighters and first responders at the march to Defeat the Mandates this Sunday at Lincoln Memorial.

Feds 4 Medical Freedom, a national grassroots coalition comprised of more than 6,000 federal workers, have officially signed onto the March to Defeat the Mandates.  They, along with hundreds of fire fighters and first responders from Washington, DC and more from across the country, will join thousands of concerned citizens as they peacefully walk from the Washington Monument to the Lincoln Memorial.

In recent months, Americans of all races and political persuasions, vaccinated and unvaccinated, have raised concerns over the discriminatory policies and mandates being implemented nationwide.

FEDS 4 MEDICAL FREEDOM was formed to respond to rigid and inflexible mandates imposed on public servants and government contractors. Thousands of these dedicated public employees have answered the call of duty and served throughout the pandemic, no matter the risk. They believe that the government should not fire workers because of their health conditions or medically informed health care decisions. Now is not the time to abandon well-established laws regarding workplace discrimination, informed consent to use unlicensed vaccines, and individualized assessments by employers.  Members of the Federal community work every day to ensure the nation’s laws are applied fairly to all citizens. Now, they are fighting the government to ensure the law is applied fairly to all federal workers.

The announcement comes just a week after Dr. Robert Malone, among the inventors of the mRNA vaccine technology, announced the March to Defeat the Mandates on Joe Rogan’s podcast, listened to by millions of people.

Operation Freedom of Choice, which originated from the fire service throughout Florida and has since expanded nationally and internationally, has joined forces with hundreds of firefighters fighting the mandates in the Washington, DC Area.  OFC has created a PSA highlighting firefighters from many different Fire Departments and their organization’s unified commitment to freedom of choice.

Organizers have named the effort “An American Homecoming” and stress that those marching are not against the vaccinated.  Many of them are vaccinated, and they are against forced vaccination on Americans.

One of the doctors’ speaking, Dr. Pierre Kory, shared a promo video for the DC march featuring Dr. Peter McCullough and musicians Hi-Res and Jimmy Levy who are performing at the rally: https://twitter.com/PierreKory/status/1474231579878866950.  Additional performers include Grammy-nominated singer/songwriter, Joseph Arthur, and Five Times August.

Frustration continues to build as more Americans face growing censorship and risk losing their jobs and being deplatformed on social media for voicing their personal opinions that run counter to the ever-changing “Washington narrative.”  Many feel that the discrimination, from restaurants to hotels to local businesses, is un-American.

Objective: To End the Covid Mandates

Vaccine Safety, especially amongst children, has been a serious cause for concern for doctors worldwide and is another driving force behind the march.  In fact, more than 16,000 physicians and medical scientists worldwide signed a declaration publicly declaring that healthy children should not be vaccinated for Covid-19.

Europe and Australia, and countries worldwide have already participated in a series of large-scale protests drawing hundreds of thousands as part of the Worldwide Rally for Freedom.  January 23 will be the next Worldwide Rally and US organizers believe it is time for America to step up and join them.

The march will begin at the Washington Monument and end at the Lincoln Memorial, where there will be a program of featured speakers, artists, and musicians.  Organizers believe that ultimately, “Defeat the Mandates – an American Homecoming” will help bring about new federal, state, and local policies to eliminate the blatant discrimination and censorship currently taking place.

Organizers urge all those participating in the march to be respectful to those affected local businesses including dining establishments and hotels forced to operate under DC’s mandate.

Partners for this event include the Global Covid Summit and the Children’s Health Defense Fund, and the goal is to encourage the public to “do not comply.”  Further details will be released as the date gets closer.