CHUCK ROSS INVESTIGATIVE REPORTERNational Security Adviser Jake Sullivan called on the Chinese government to release raw data from the early days of the coronavirus pandemic, saying that the Biden administration has “deep concerns” about the World Health Organization’s investigation in China into the origins of the virus.

“We have deep concerns about the way in which the early findings of the COVID-19 investigation were communicated and questions about the process used to reach them,” Sullivan said in a statement released by the White House.

“It is imperative that this report be independent, with expert findings free from intervention or alteration by the Chinese government.”

Sullivan said that China “must make available its data from the earliest days of the outbreak” in order to “better understand this pandemic and prepare for the next one.”

Sullivan’s remarks come after startling revelations about a WHO team’s visit to China this month to investigate the origins of the virus. 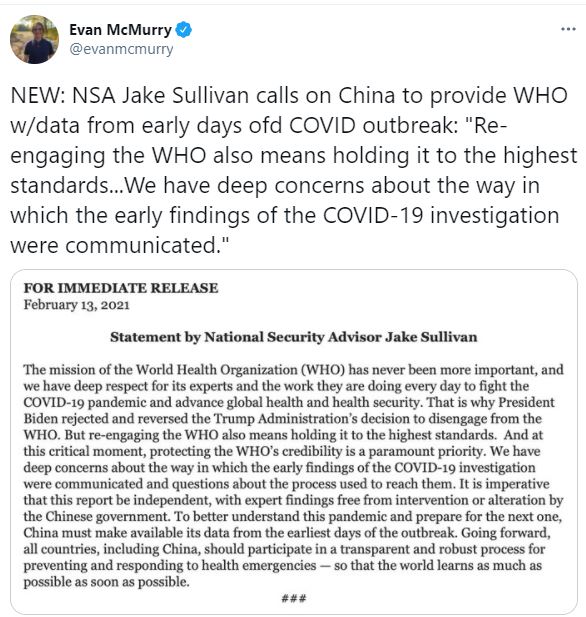 An Australian scientist on the 10-member WHO team told The Wall Street Journal that Chinese authorities withheld raw data from early cases of coronavirus that popped up in Wuhan in 2019.

Chinese officials provided only summaries of the cases, but researchers hoped to analyze the raw data in order to get a better sense of how the virus spread to humans.

WHO officials gave conflicting assessments of the investigation during press conferences this week.

On Tuesday, Dr. Peter Embarek, the leader of the WHO delegation to Wuhan, said that it was “extremely unlikely” that a lab accident caused the first infection in humans.

“A laboratory incident hypothesis is extremely unlikely to explain the introduction of the virus into the human population and therefore is not a hypothesis that would suggest future studies into our future work into understanding the origin of the virus,” Embarek said.

He also said that investigators planned to focus on three theories for how the virus transmitted to humans: through frozen food transported to Wuhan, by jumping from a bat species to humans, or through an animal infected by a bat which then spread to humans.

Tedros Ghebreyesus, WHO’s director-general, walked back Embarek’s statement on Thursday, saying that “all hypotheses” about the origins of the virus “remain open and require further study.”

Sullivan noted in his statement that President Joe Biden reversed the Trump administration plan to withdraw funding from WHO over its response to the pandemic.

President Trump and other Republicans accused WHO officials of failing to hold the Chinese government accountable for pushing false information about the virus. On Jan. 14, 2020, WHO’s Twitter account touted a claim from Chinese officials that the virus did not transmit from human to human.